The Last Supper and 10066 Cielo Drive 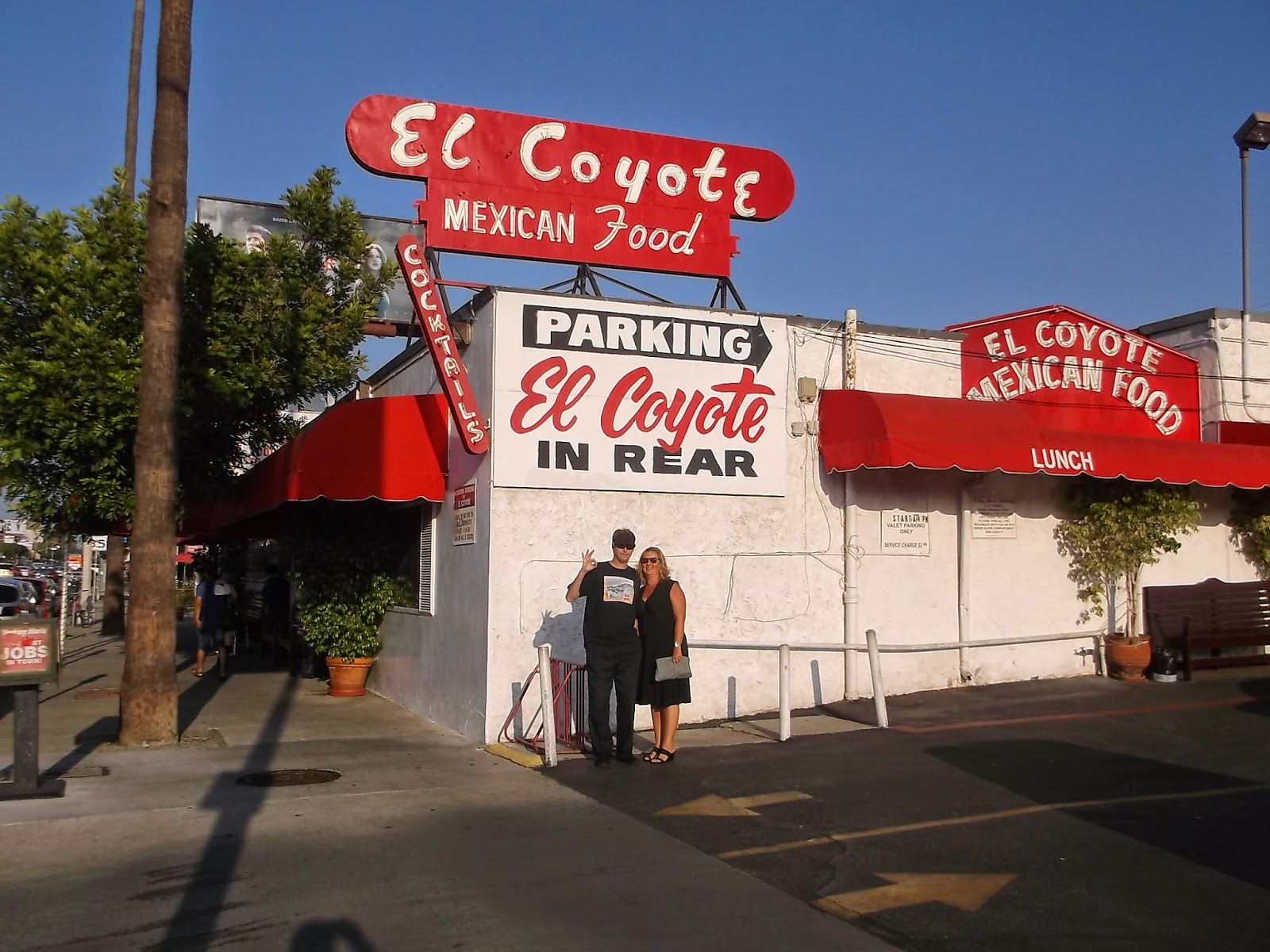 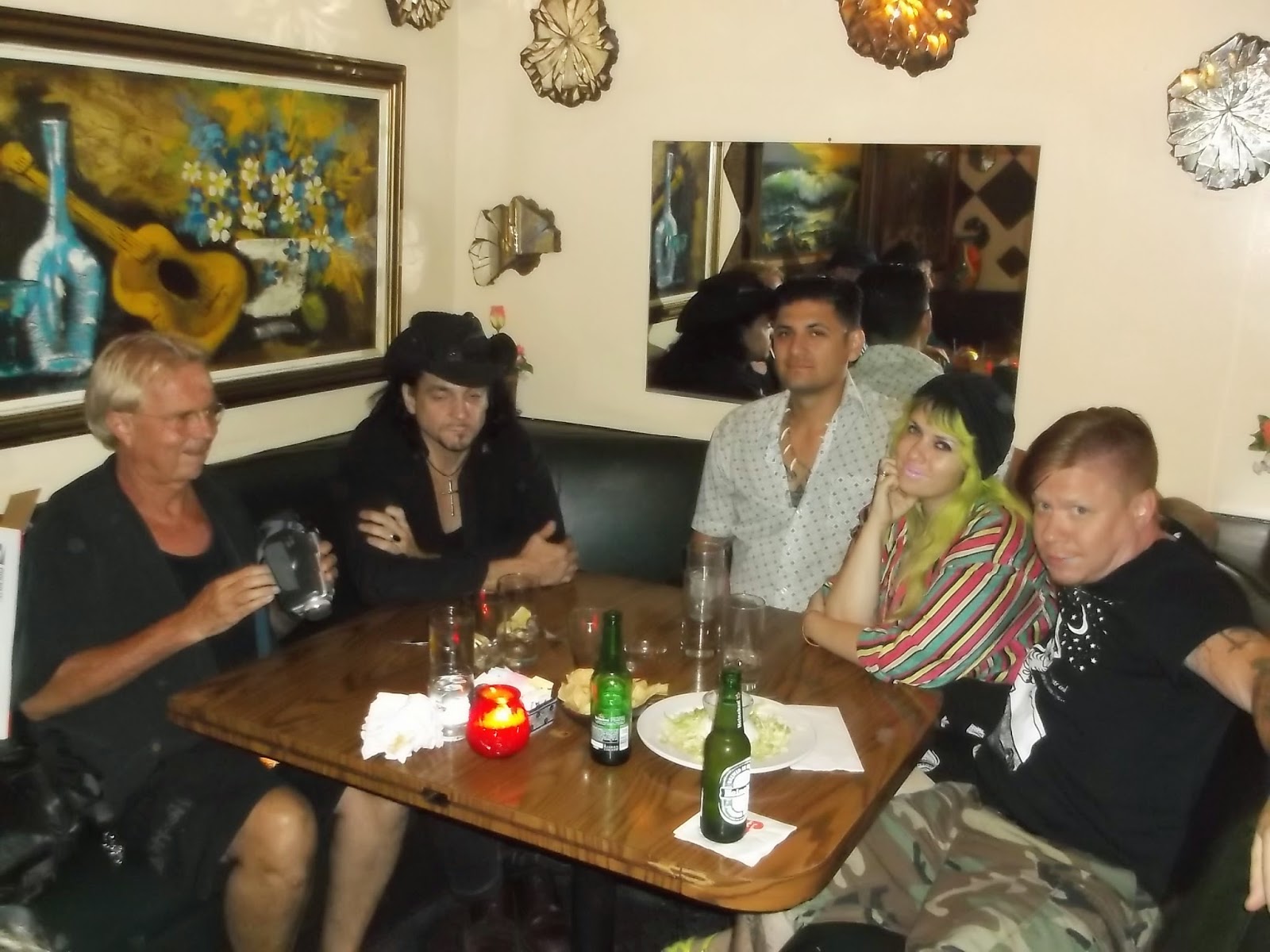 Apparently, Jon Aes Nihil has been hosting what he refers to as the Last Supper for the past 35 years at El Coyote. This year, Patty was lucky enough to get invited to sit with him, Matthew Roberts, Stoner van Houten and his roomie, Michael Channels, folks from the Museum of Death in Hollywood, "Uncle Paulie" from whatuphollywood.com (who worked for the LA Free Press in 1969) and a mysterious gentleman named "Ed" from Pennsylvania who refused to be photographed. 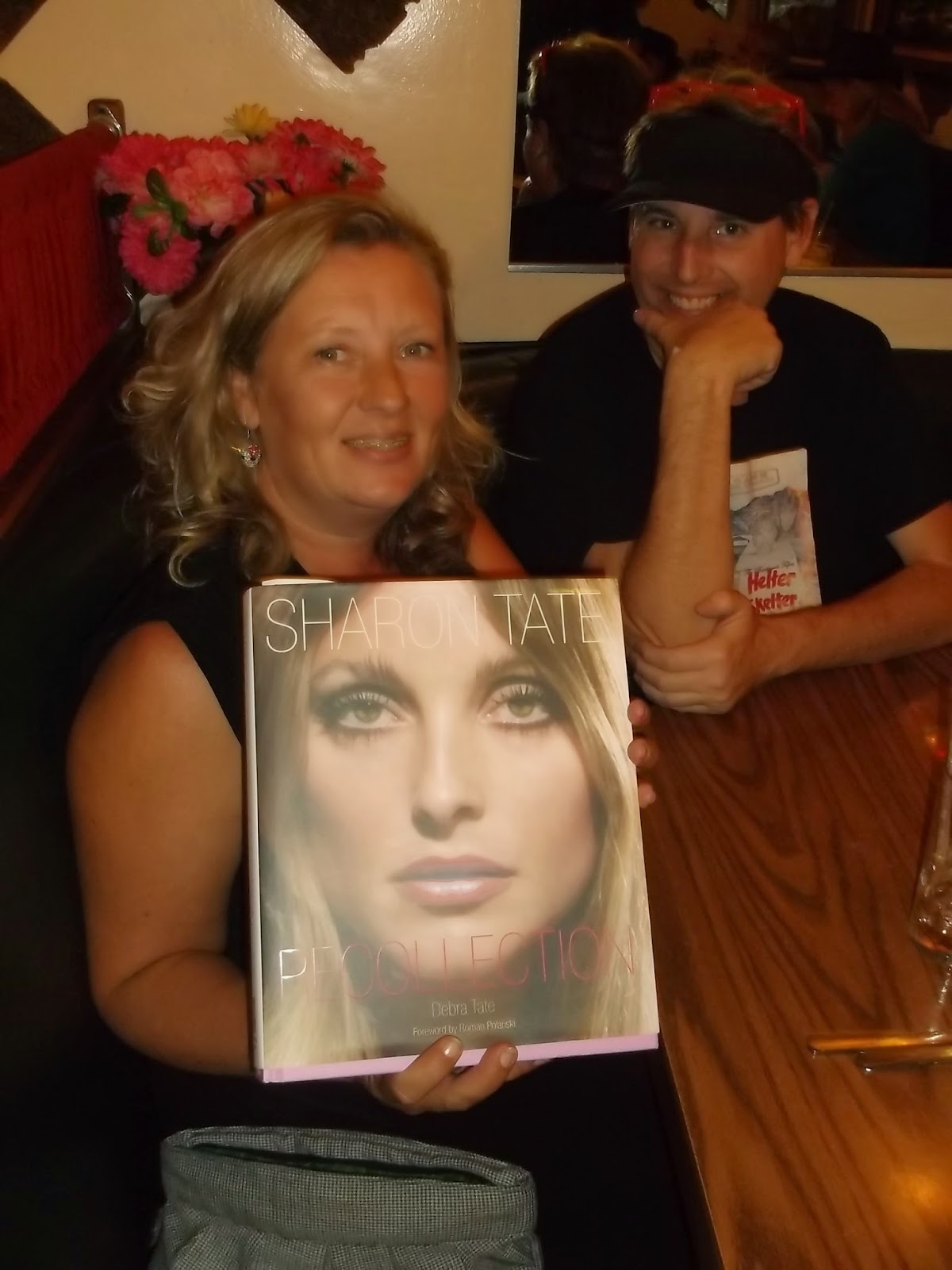 What a night. Of course, no one showed up on time for 6:30 cocktails (Jon Seger, where were you?). No one showed up on time for dinner either: Reservations were for 7pm, but nearly everyone waited until 8pm to make their appearances. The wait staff was freaking, Stoner was freaking, and Patty successfully resisted the urge to pop an Ativan. Once the table was full however, a good time was had by all as we passed books, photographs and an El Coyote baseball cap around the table to be signed. 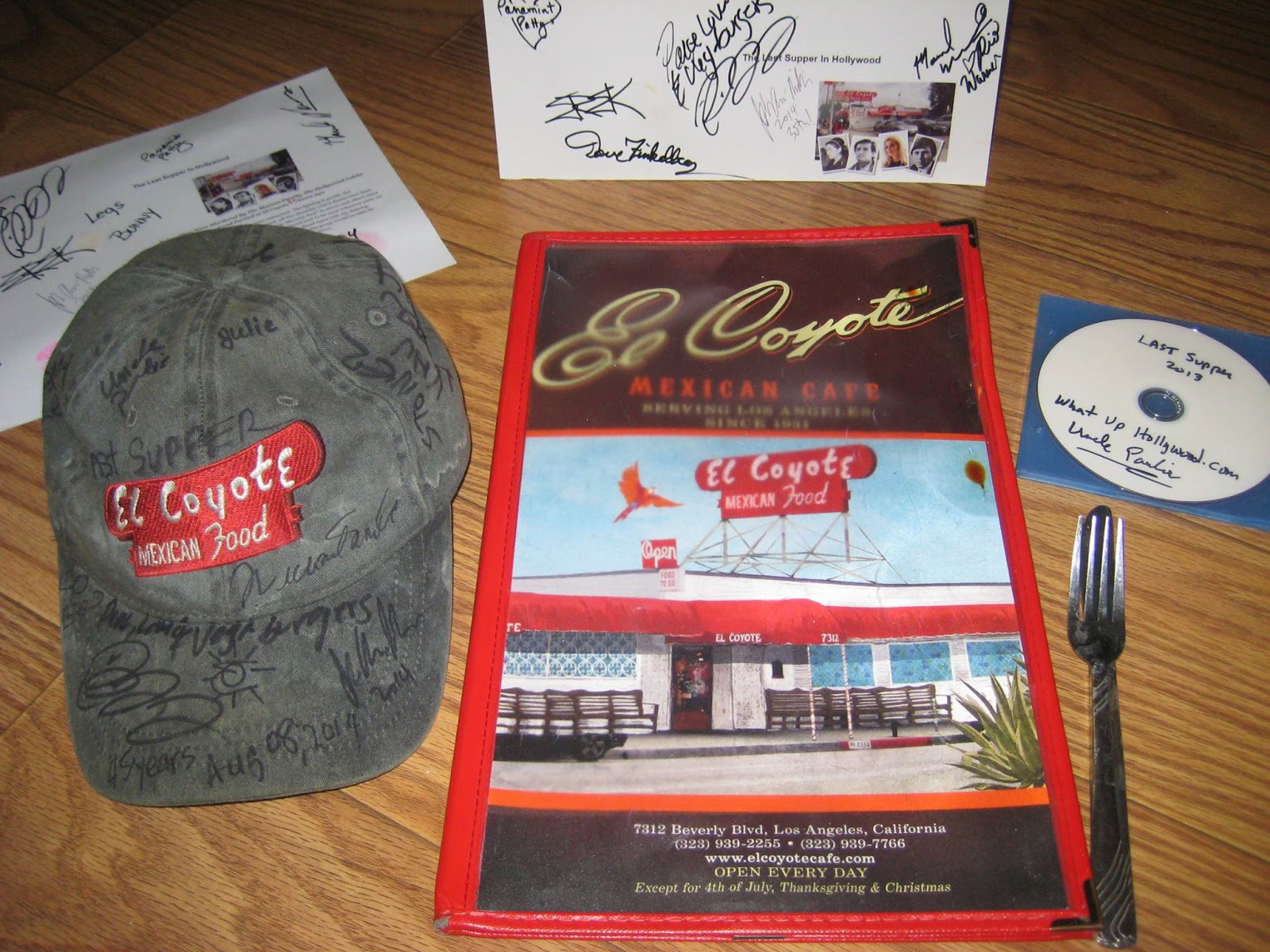 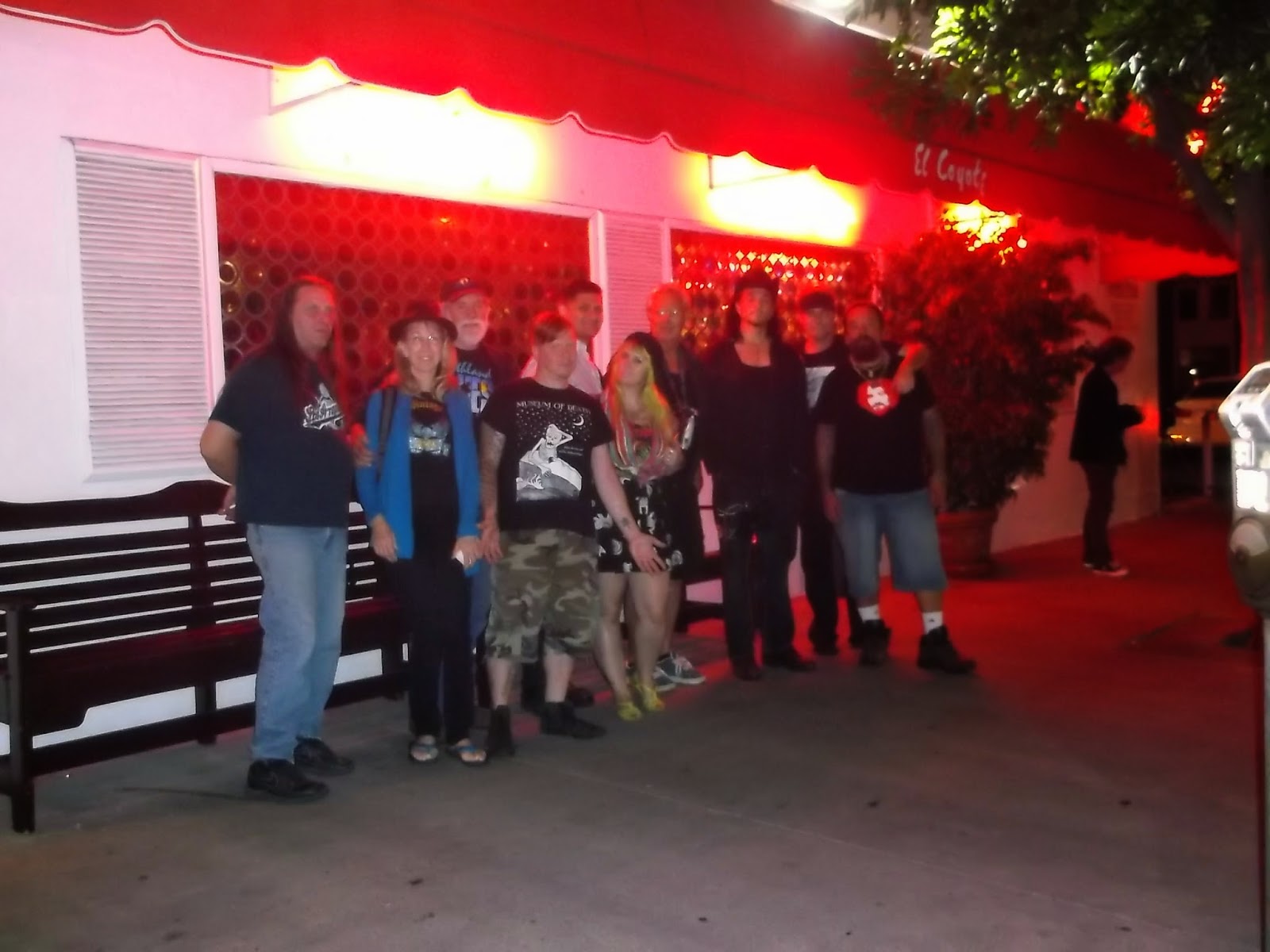 By 9:30pm. the wait staff was again freaking. One of them came to the table, looked Patty square in the face and said, "There's a shit ton of people waiting for this table, its time to leave."  Stunned, Patty replied, "Well, I'm not in charge here." "Who is?," he asked?  Patty shrugged, so he stood further down the table and repeated his same line as if he'd been rehearsing it for a while. A gentleman at the table next to the Sharon Tate booth took Patty aside and offered to buy the whole table another round, just to piss dude off.  However, we complied. Michael Channels' video of the occasion can be seen here. 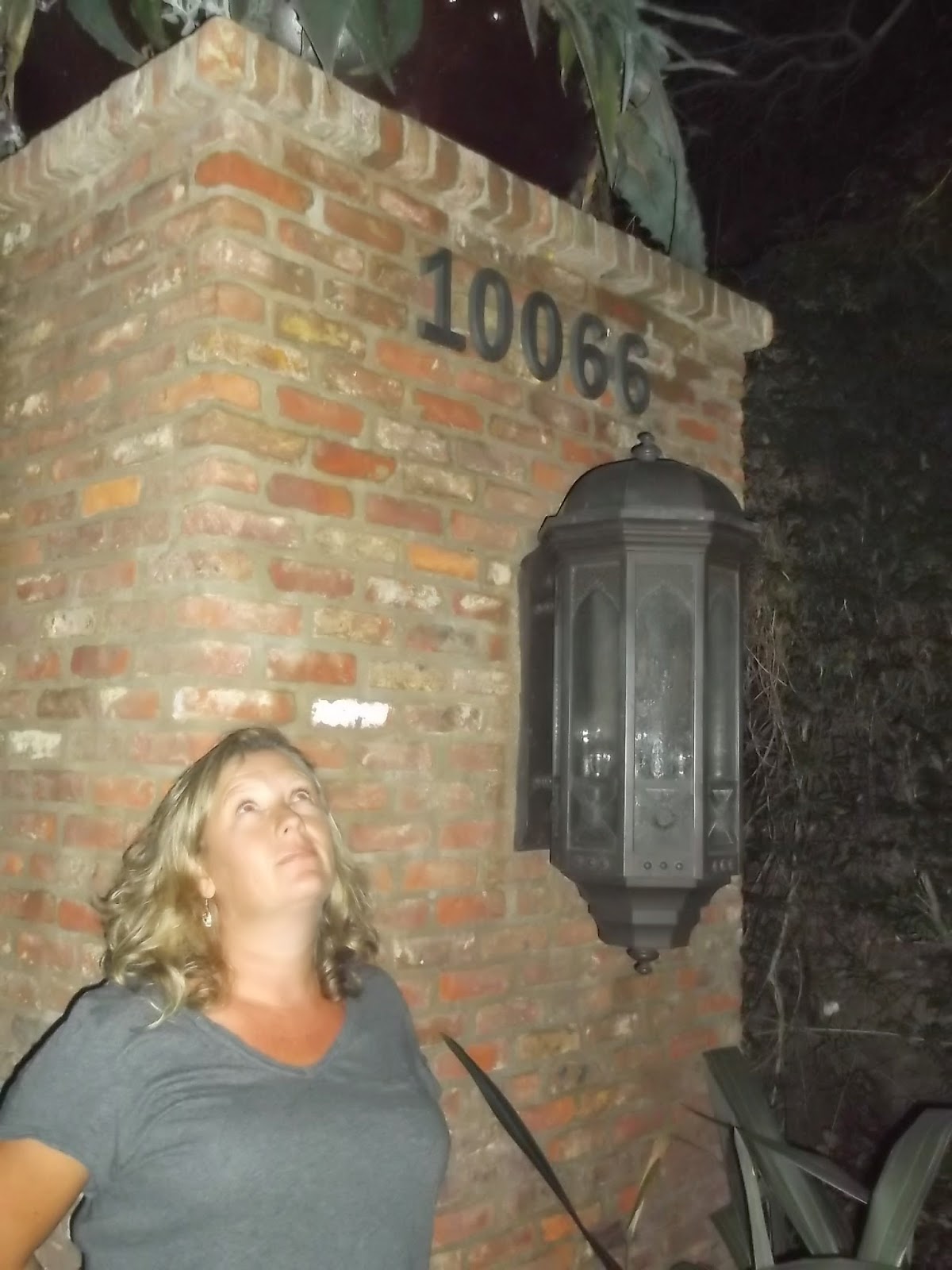 Cielo was next.  David Oman was hosting a party at his house that we were told was a paid event.  Patty didn't ask how much Oman charged per person to tell his ghost stories and serve Foster's on tap. 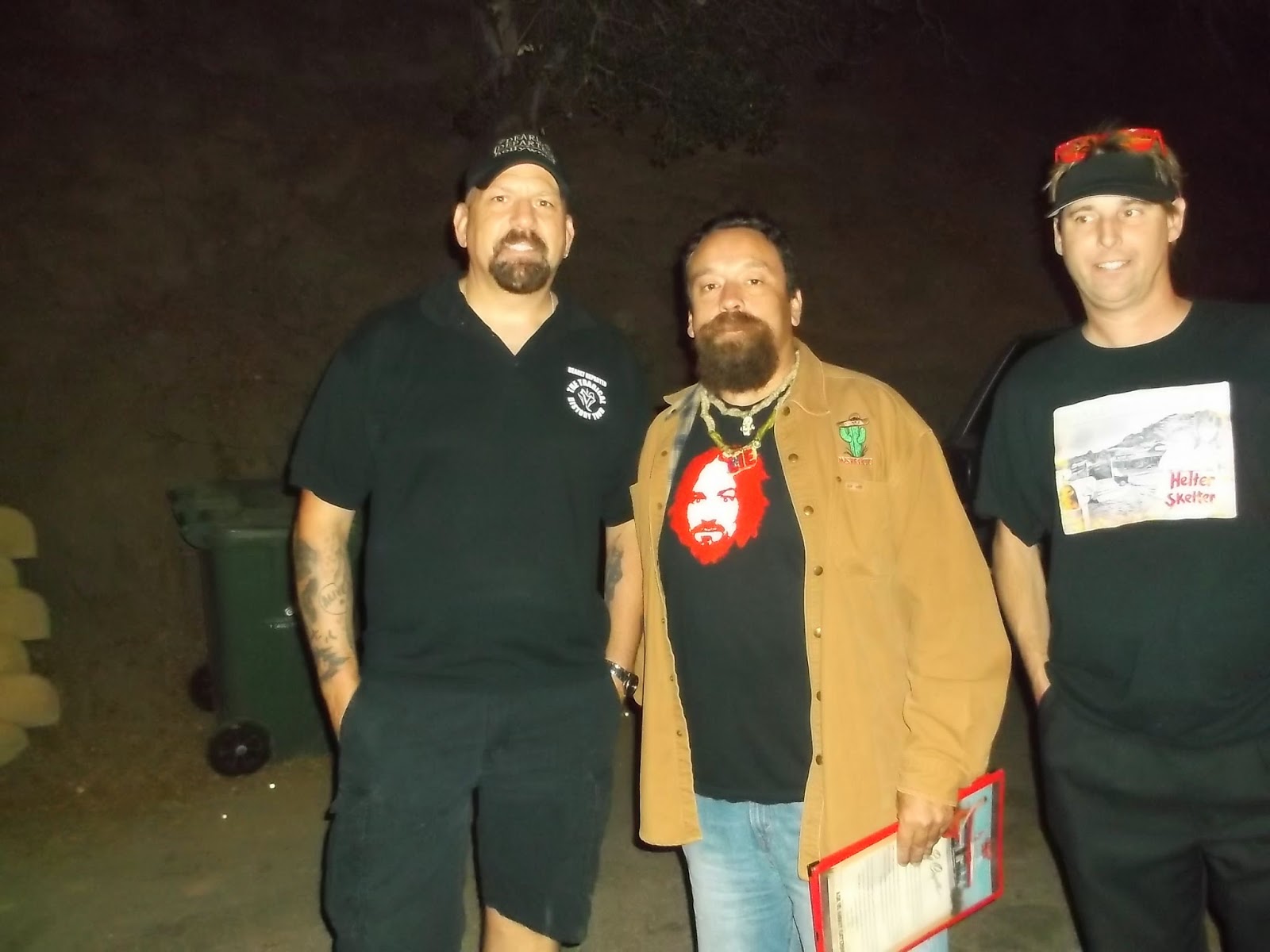 On the way out, Patty, Stoner and Stoner's roomie Dave Finkelberg noticed Scott Michaels coming up the hill with a group of very sober looking tourists who didn't say a word. Stoner walked up to him and introduced himself.  "Yeah, I've heard of you," he replied.

The next day, a friend of Patty's forwarded her a link from tmz.com: Oman is claiming that the ghost of Sharon Tate set off his fire alarm around midnight. Um...okay...

it was a great night..walking up to cielo dr. was the best it was very dark..the fact that scott michaels knew who i was ,was funny to me...lol..

Wow, that Tate book is HUUUGE!

Power To The People Patty!

I don't think she will remember...

That's her new name Max.
I dubbed her "Power To The People Patty"

Patty, I am sooooo sorry. I don't have a car right now, and couldn't get to El cayote. I was really bummed. Been anxiously waiting for your post and love the pics! I cannot believe you were treated that way from the staff. Seriously rude!! How was the food? Is it as bad as everybody says it is??? I saw the video on TMZ..Seriously dumb! Of course the smoke alarm was going to go off with a thousand candles lit! LOL..David Orman is a trip

PS, is wacko Oman's 10 years in the making movie ever going to be released so we can all laugh at it?? :-)

Patty is remembering the power to the people thing now...LOL. John, the first two times Patty ate there the food was god awful. This time however it was delish. Patty highly recommends the street tacos.

Wow. Creepier group than even Charlie could put together.

yes Vera it was excellent!

Vera Dreiser said...
Wow. Creepier group than even Charlie could put together.

Coming from someone who could use Jenny Craig and a dermatologist.

Patty, awe poor Vera fell out of a tree and hit all the ugly branches on her way down. Inside and out. All the kings horses and all the kings men, couldn't put humpty Vera back together again.

I guess celebrating the vicious killing of seven innocent people by going to the mediocre restaurant where they didn't actually have their last meal is all the rage now.

Between a guy named Stoner and Acid Aesnihil I can only imagine the scintillating conversation.

God, the Col and Vera agree on something!

It was a remembrance, not a celebration. DUH.

Patty- Nobody looks like they remembered to pay the bill much less the victims. Unless signing a baseball cap was something Jay did as a pastime.

Vera I am glad you are there, I tried to reach you on a previous thread. You, Robin, have pissed me off, so I am working on a piece about Debra's attempt to help Patti with her breast cancer fight. Can you check and see what you and Debra would like to add to the piece?

what better way to advance and share knowledge than to meet face to face? Ur missing the whole point.

Col, for the zillionth time, I am NOT Robin Olson, nor do I know her. And I am not in communication w/ Debra Tate. I suggest you contact her yourself.

Vera you are and you are. But that's okay, I just wanted to ask for comment.

It was probably Stoner setting off the alarm, looking for relics.

lol Trash...either that or Stoner being, well, a Stoner.

@ Patty, does Mathew Roberts and you talked about Charlie being his daddy ??? How did that story ended anyway, I lost track on that a while back.....
Grtzzz Hanz

Owh and btw....that David Oman link... The seance was held 200 feet from the site where Manson Family members slaughtered 7 people, including Tate. & people in 200m ???

off track a bit, but I noticed both RH and the COL posting on an earlier thread. Do these two icons ever interact or even acknowledge each other? If they attended Charlie's funeral would they deign to sit in the same pew?

Could I sit with Patty? I always thought her a stone cold fox.

Can we get some Vegas odds on who will still be here for the 50th?
Family members I mean, not bloggers. Vince made the 45th. NObody woulda bet a nickel on that a year ago. I'll bet he just stubbornly refuses to go before Manson.

Patty, just for kicks some night why don't you work up a seating chart for Charlie's funeral.

I wanna sit near Trilby, the Saint and Ruth Ann, and as far away from Sandy and Star as possible.

Hey Leary, hope you're doing well. Nice to hear from you.

Hans, Patty did learn that Matthew has been writing to Charlie for over 12 years but as far as the DNA test goes, he is NOT related to Manson. He seemed really sad all night, Patty hopes he can find some internal peace.

Leary, as always, you rule. Patty has missed u.

PS Patty once witnessed RH and the Col shake hands with her own eyes...

Stoner has a video up of him, Patty and Dave walking up Cielo. Its hard to see much, but the narration is funny. At the end you can hear a guest of Oman's say, "you have to pay."

hiya matt, patty. doin well, thanks. Summer in northern Minnesota is the balls - great temps and endless lakes to explore. Minnesota summers and Texas winters, good stuff.
Still dreamin of running into Mother Mary at one of the many upper midwest libraries I frequent. Grand Rapids Mn is the best, reading room right on the Mississippi River. I feel like Huck Finn sittin there.

@ Patty, Thankz for reply. Dispite the DNA not matching, I still find that Mathew R. does have some simmilar features in a kinda way. But anyway.....If he writes Manson for 12 years,as you say,then he could know a thing or 2 about him........... Beye All , Hanz

Patty, tell us more about "mysterious Ed," whom dodged photos, and what not. Inquiring minds wanna know. LoL