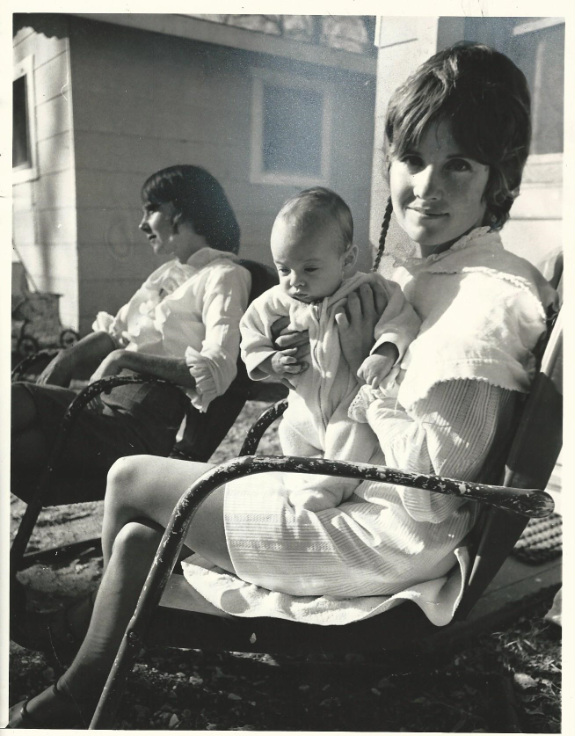 ﻿Do these two women not look as pious as Sunday school teachers?  They look so crisp and white that it's hard to imagine that they were able to live in the filth of the ranches and eat out of dumpsters.  Sandy is even sitting on a towel so that her dress doesn't get soiled!  But I guess that's the point of having this picture taken, they weren't a bunch of dirty slippies.  Yeah, right.....

The earliest date on the back of this photo, taken in Independence, is December 8, 1969. 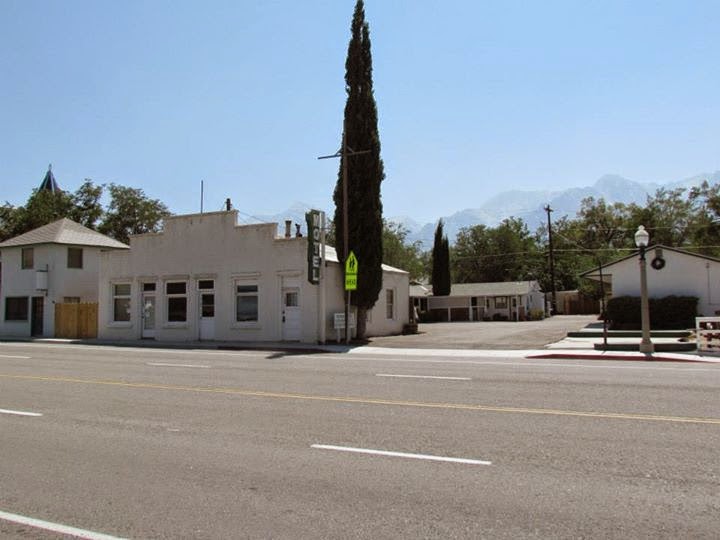 Candy and Nuts also sent us these photos.
It looks like they were taken on the court date in Independence. 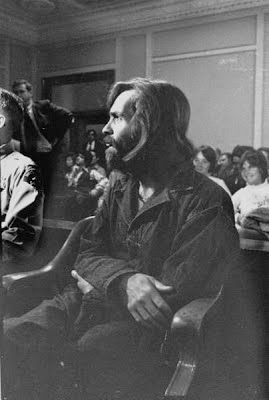 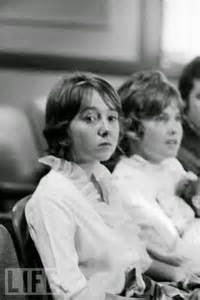 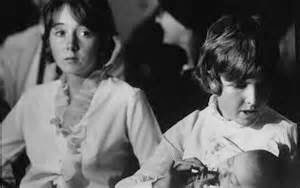 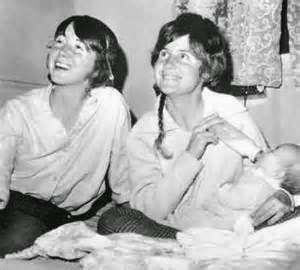 cool find Deb, Patty has never seen that one b4

Yeah Matt, that'd sound more appropriated! :)
It sure don't look like Sandy's or Joel's.
But I've seen other pics of baby Ivan and always thought he looked more like Sadie! :P

Those girls were so in love with Charlie. I have always wondered if they ever fought over his affections. Lynette was clearly his favorite, so I am sure Sandra Good would throw hissy fits over it. I read in Paul Watkins book that Sandra Good would throw temper tantrums, and would sit & pout if something didn't go her way. I also heard Brooks Poston's recorded interview when he said that Charlie would make Sandy do terrible sexual stuff, and pull her hair, etc. That's horrible!!

About the Family babies, i wonder how they "knew" who the father was? I mean, they were not into monogamy as we all know.Paternity was presumed i suppose? Or they had periods of steady sex partners...

Maybe it was in "Manson in His Own Words" Charlie said his favorite to make love to was "Ouish" but Paul Watkins said Lynn was Charlie's girl.

They are very clean but they still look like hard-core cult members.

How do they look like hard-core cult members exactly?

Maybe it's partly because I know who they are, but also the way Sandy looks at the camera is very intense and makes me think something unusual is going on. And the clothes and setting remind me of other cults like the Mormon one down by Arizona where lots of abuse was/is going on, or maybe the Branch Davidians.

And Lynette has a dreamy far-away look that you wouldn't normally see in a woman sitting around the ranch.

Thanks, Cuntry Trash. I added your pic to the post.

"They look so crisp and white that it's hard to imagine that they were able to live in the filth of the ranches and eat out of dumpsters."
While conditions at the ranches were primitive, they were usually not "filthy." "...eating out of dumpsters" gives the wrong impression of "dumpster diving"; the food being procured on those "garbage" runs was perfectly good food that was being thrown out and wasted.
Not apologizing for Charlie or the girls, but they ran a pretty clean scene most of the time.
The girls look like the middle-class white girls they were; they could've been my sisters.

And that Gary is what fascinates me about the whole story!

It's all perception Mr. Humphrat. To me it looks like a generic pic of two women and a baby, with one of the women looking directly into the camera. Looks like Lynette is talking/listening to someone off camera.

When you are young, you do a lot for independence. Dumpster diving really isn't that bad if it's for recently discarded food from the source.

Living at Spahn's couldn't have been that bad if it was a common crash pad before the Family. But you also have to remember Spahn was not the only place they were and were only there for a short time, really.

I would prefer Spahn's over Barker's, that's for sure. Barker's is a beautiful place but with the heat, the horse flies, and the fact (depending which way you hike out) it's 30 miles to a ghost town or 55-60 miles to Shoshone where the Family was not welcome. If the Family was not apprehended, I promise you that Barker's would have drove them to something really substantial that would have made T/L pale in comparison.

I went up there once and had a Jeep overheat and I nearly went psycho waiting for the truck to cool down. It is the most claustrophobic, out-of-control feeling I have ever had.

I also think that secretly Sandra knew M loved Squeaky more, and that may be why Sandra was so insanely dedicated to M after Squeaky went to prison.

Also, Sandra sitting on the towel says a lot. We have to remember she left Barker's to have her baby in Los Angeles. If she would have had it at Barker's, Ivan would have probably died.

She was not from the same bolt of cloth as most "hippies" I don't think. A rich wild child, more or less.

Yes Max, it is very subjective how one sees them. To me Sandy often looked like she wanted to bite someone's head off. I have hard time seeing her in the recent photos of her. To me she looks like a different person altogether now.

The photos Candy and Nuts contributed got me wondering who took them. This was before the case was "solved" by LAPD so they weren't a story yet.

I am assuming someone covering the story, seeing that Charlie had these two "hippie" girls appearing, perhaps big news in small Independence that now only holds court one day a month (or so the guy at Furnace Creek told me).

I can't remember who got busted in Independence and why the two girls weren't? Was it the arson charge?
But i look at Sandy in the picture and remember the Bug telling that someone heard Sandy say "I've finally reached the point where i can kill my parents". Such sweet face...

Cris both Squeaky & Sandy were arrested in the Barker raid but were released.

Thanks Matt, i guess that's when they got the hotel room then..

nice picture never saw the first one.The family to an outsider before the crimes were known must of turned many heads all those pretty girls so carefree it is easy to imagine how someone young could have gotten involved with them.When you see Lynette being interviewed with the Lie album she looks so young and sweet.

Ive never seen the girls "dirty or filthy". I can imagine when they were up at Barkers's with no water and all that dust maybe-and maybe why they cut their hair so short at the time, because they wouldn't have access to the waterfall or other water. All of these girls at one time or another went to school and dressed up properly, as seen in countless yearbooks. They weren't brought up in a slum wearing rags, so why would they act any different then? I recall Sandy once said in some interview people said they were dirty and she said something like "let myself go? ( not be cleaned up?) you can call me a killer but not that.Im sure they wanted to look especially nice when representing Charlie, but for the most part they were still all American looking girls. I recall one story how two guys saw a cute blond in a short dress walk past them during the trial. When they got inside they found out it was Cappy and were shocked it was a "Manson girl" . IMO

Candy, what about the girls wearing no shoes? Sandy and Squeaky are pictured clearly all dressed up to enter the courthouse.
I still can't believe the girls didn't wear shoes daily. Is that correct?

Cris most people back then, hippie types or pseudo ones didn't wear shoes all the time-it was the in thing to be free and be one with nature- my own sisters and friends in the early 70's always went barefoot around cus it was the in thing to do I was about 7-8 and begged my mom to let me go barefoot well I ended up stepping on a piece of glass-haha As many times as Ive seen pictures of the girls with shoes, Ive seen them without- like I said that was a hippie kinda thing I would guess-maybe just like girls stopped cutting and curling their hair and shaving their legs and not wearing bras I think a lot of women and girls did that back then not just the Manson's, IMO

Thanks Candy, i thought it was only a Manson girls thing. Imagine living in the ranch barefoot, the things you stepped into - ouch!
Yeah, the glass is what first came to my mind! Haha..
Those pictures of the girls on the corner in the middle of urban LA, and barefoot, are very "different".

Yes one picture I saw of Sandy, Mark Ross and Gypsy outside the courtroom it looked like Sandy even had nylons on with no shoes -so who knows-maybe just depended on the mood of the day