It Seems to be True Star and Charlie Got a Marriage License!

CORCORAN, Calif. (AP) — Mass murderer Charles Manson has gotten a license to marry a 26-year-old woman who visits him in prison.


The Kings County marriage license, viewed Monday by The Associated Press, was issued Nov. 7 for the 80-year-old Manson and Afton Elaine Burton, who left her Midwestern home nine years ago and moved to Corcoran, California — the site of the prison — to be near Manson. She maintains several websites advocating Manson's innocence. 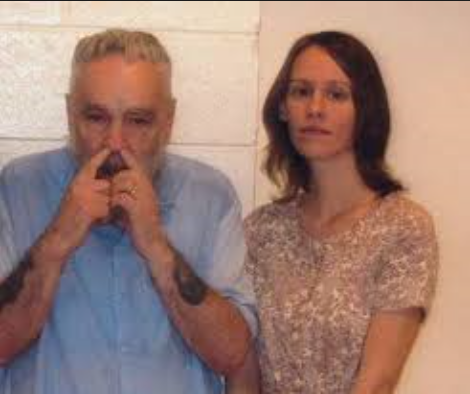 Does anyone else find the timing of this announcement "interesting?"

AP: "Burton said the wedding might have happened earlier if Manson did not have "some situations" at the prison."

Another random thought. Patty heard a rumor a while back that someone well known to us is the executor of Charlie's will. She wonders what this union will mean for him if indeed it is true? Does the spouse always become the full beneficiary? Or will there be a fight over his legacy, whatever that legacy be? When Jerry Garcia died it was a goddamned mess. Only time will tell, she supposes.

This announcement warms the cockles of my heart.

Is it safe to assume that Charlie's outta hospital now or nah? Did I miss something?

And they say crime doesn't pay?

Yep, Patty. "Interesting". I think he's on his last legs, & I'm interested too as to the legalities - whether the marriage creates an heir situation for "Star" that supercedes the previous executor agreement. No justice. Guess she's set to get rich now off of the blood money.

She is a freak and kinda looks like Sadie

Legal questions will arise like NEVER before. The minute they say "I do's" THEY will become "legal adversaries' to the extent STAR can only benefit from Charlie's death. Because Federal Copyright Law supersedes ALL state laws, she may benefit - EXCEPT that which he OWNS prior to they're getting married belongs to HIS estate. BUT that which is HIS may actually be "the Family's - because THEY were/are all "one."

A more exciting question may be: Has Charlie been "baptized" and thus going to "Heaven." ?

Imagine, all of you out there who would love to sit down and talk with the "king" of evil: Charlie's dance card will be full FOREVER in eternity. I'm sure this time, even JFK and LBJ will be complaining: "How come a mass murderer like Manson gets more attention than US ? We created the Vietnam War where over 50,000 American boys DIED."

I wonder how this makes Lynette Fromme & Sandra Good feel that they threw away their whole lives to one man, and he turned around, and did the same, exact thing a lot of men do: exchange them for a younger version. This time, though, I think this girl is in it to make money, and nothing else. Next, you'll see her having her own reality show.

Didnt the article say she said she wants to help charlie get a new trial and she could get more info being Next of kin? Charlie has kin though his grandson.......

Love the fingers up the nose. Classy. I hope Manson isn't one of those men who refer to their significant others as " my old lady" the thought of that is too much to handle.

I think Lynette had real writing talent, and I feel badly that she threw her life away for him, basically. No different than many other women do for the love of a man, though, very unfortunately. Wonder how many great female minds, instead of finding a cure for cancer, spent a lifetime pushing a Hoover. But if it's someone's choice, it's their choice.
I absolutely can't stand this Afton/Star creature, particularly after her remarks about Sharon Tate. They're working some legal/money angle.
And Mr. H, that remark was brilliant!! Yes, if "all is one", shouldn't the "founding and contributing" members of the Family share in royalties, etc.??!! Hahahaha... Laughing. Guess Charlie is just as "plastic Hollywood" as Melcher and Wilson - he only believes in "Work for Hire". His hypocrisy remains the most consistent thing about him over the years.
I think this hospital stay, & legal access to information, & a possible terminal outcome for him (40+ years too late) is the motivation behind this license.

This announcement warms the cockles of my heart.

hippi you only drop comments occasionally, but they always crack me up!

Star has pushed for this marriage for years. Charlie's never been interested in getting married, but then, with him it depends on the day.

The Associated Press article is a bit more informative about the situation. The prison has received the marriage license but it does need to be approved by the prison before the marriage can take place. Quoting the article-------- "Thornton said each California prison designates an employee to be a marriage coordinator who processes paperwork for an inmate's request to be wed. In most cases, she said, the Department of Corrections approves of such weddings as "a tool of family reunification and social development." But Manson is a unique case."--------- What are the odds of the prison approving such a marriage? I don't think this is a done deal. Just my opinion.

AustinAnn, you completely beat me to the punch! I read this story earlier and only managed to log on but my very first thoughts were along the lines of "I wonder what Red and Blue are thinking". I also wondered out of the two who Charlie would have gotten hitched to. Considering that Star bears more than a passing resemblance to Sadie, you would think she'd be the last person he'd ended up getting married to as she'd be something of a constant reminder of the person whose testimony pretty much landed him in prison to begin with. Then again, Charlie's reasoning skills don't parallel most people's at the best of times...Be that as it may, who else is giddy at the prospect of the prison chapel wedding photos??


but this situation... not so much to me

Manson Gettting married......giving up that last little piece of Freedom He has....???

Blogger HellzBellz said...
Manson Gettting married......giving up that last little piece of Freedom He has....???

In a way it's kinda sad, but MARRIAGE is a word that pushes everyone's emotional button. Seems every radio station in town is doing a story on the STAR issue. Just listened to a station inter cut Star's voice with old Susan Atkins tapes and guess what ? STAR has got Atkins voice down perfect.

What are the royalties of which people speak? The music can't be earning much.

Manson Gettting married......giving up that last little piece of Freedom He has....???

Would the person hoping to be executor have the initials NS ?

Will she be able to sell the stuff he sends her (letters, pictures etc)?

Lolo, Patty'd image that she could. Lots of collectors sell his stuff and other "murderablia:" for instance, Gerry Harder

Tex had more than three kids.

Stoner has keyboard issues - his caps lock get stuck (seriously).

lol @ how Star is apparently still trying to get Manson a new trial. It's hard to believe that's true because it's so dumb - Manson will never, ever get a new trial and if she's still holding onto that hope than she's dumber than she looks. Even I gave up on my teenage dream of "if Manson just gets a new trial then you'll see! He's just misunderstood!" type shit.

LoLo, sure, why not? She can now, and so can anyone else.

I wonder whether Charlie will live long enough for Star to get old on him.

I totally agree with you. If Susan Atkins was known for anything but the Manson Family no one would be saying Star looks like her

Agree on the Star/Sadie thing....I don't see them as look-a-likes AT ALL!

Star is HOT. Sadie was not.

Sadie was too the hottest make no mistake dispite the evil things she did.

Why does a middle aged man call himselr Stoner?

Cappy was the hottest of the spahn ranch girls. Sadie had a moustache.

Ah, the moustache...it ruined Sadie's look! And Gypsie's too. A little of wax wouldn't harm the slippie lifestyle...

Stoner your sense of humor is just great! I always giggle to myself when i read your posts :))