This report was made after Moorehouse was found guilty in the second jury trial held to determine his guilt or innocence for selling LSD.  The first trial ended in a hung jury.

Cielodrive.com has excellent background on Moorehouse and how he became involved with the Family.  That information can be found HERE .  Among the information provided are some documents showing that Moorehouse could not have occupied the Cielo Drive house between the time that Candace Bergen and Terry Melcher lived there and Roman and Sharon signed a lease.  Bugliosi was flat out wrong when he stated this in his book and it seems to be one of the harder rumors to quash.  Moorehouse was sent to prison January 2, 1969, the day after Bergen and Melcher moved out! 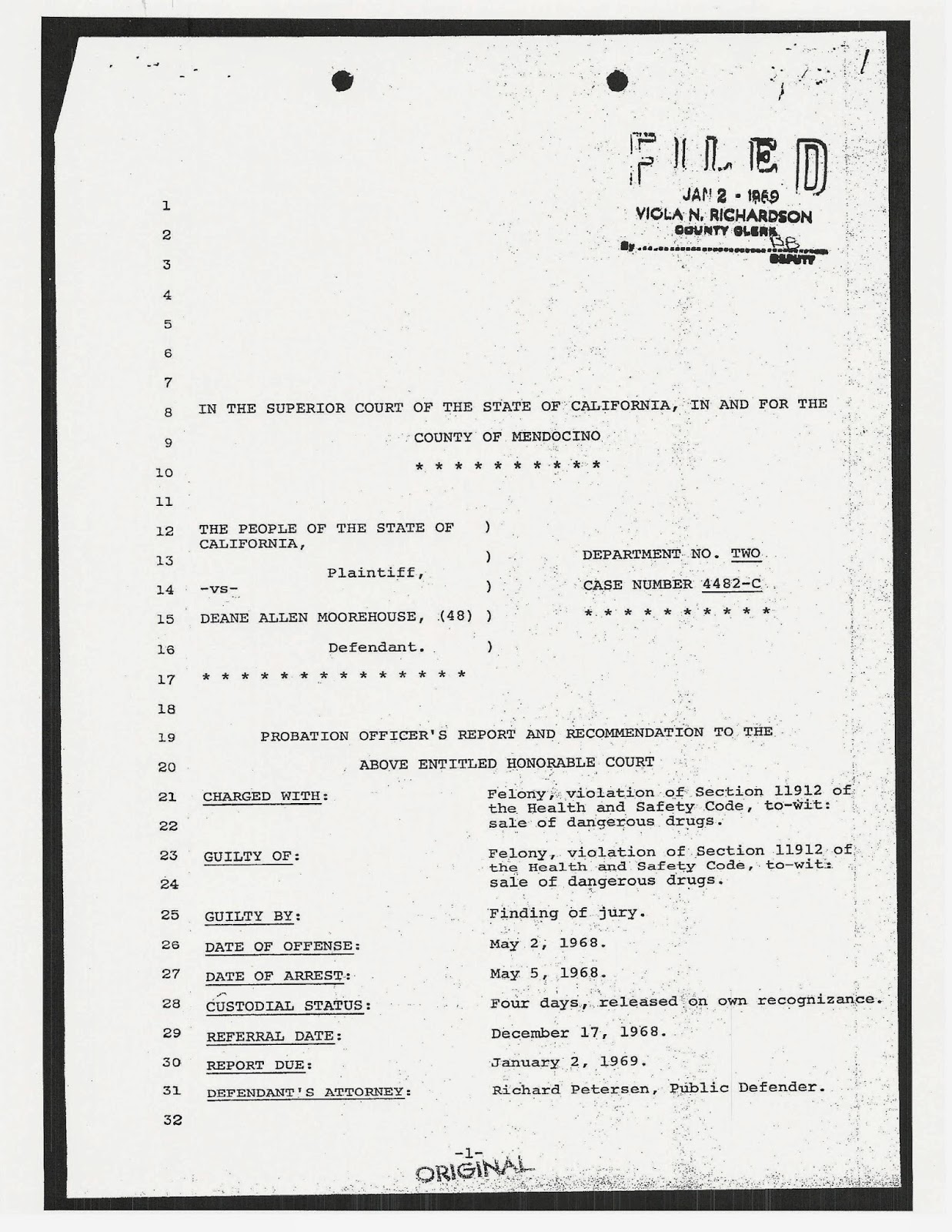 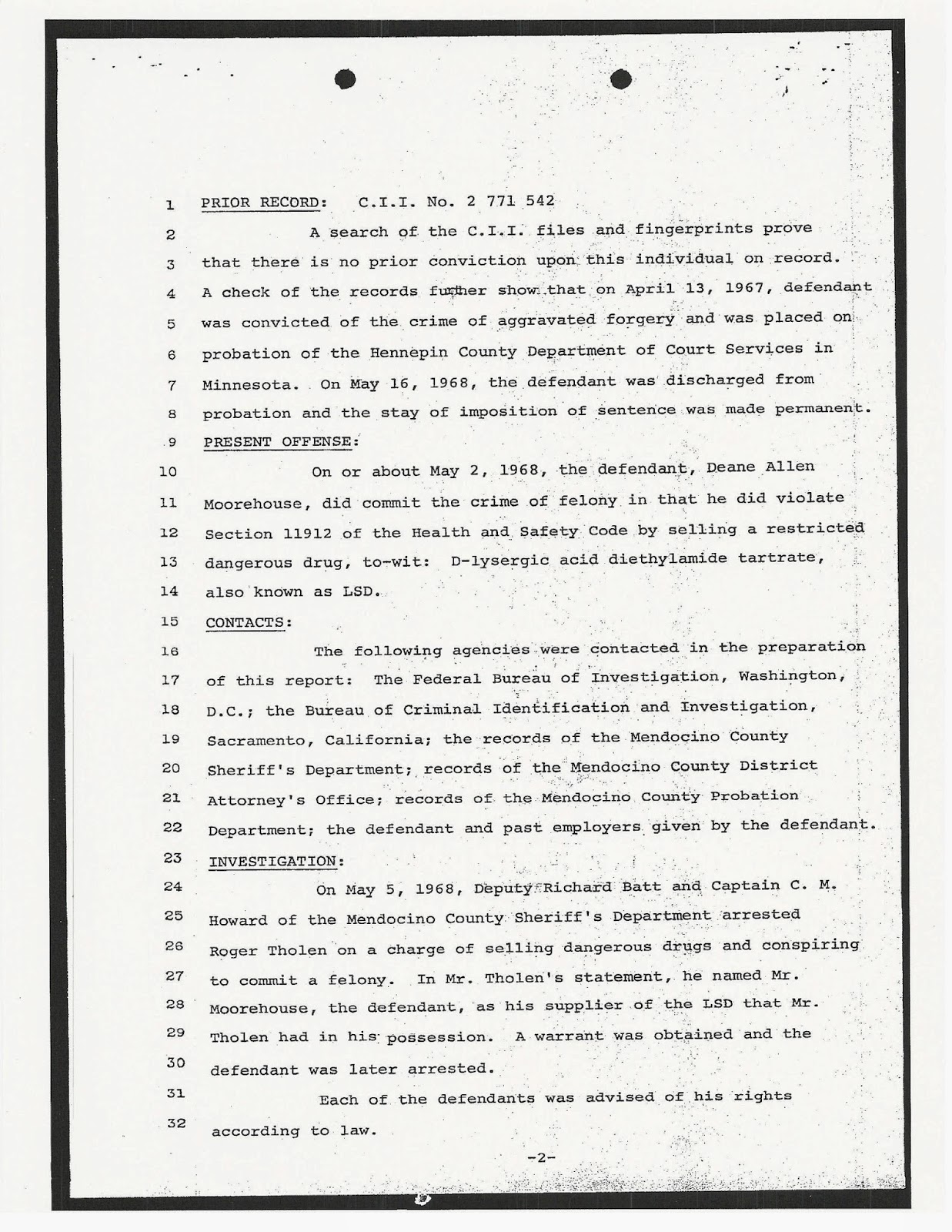 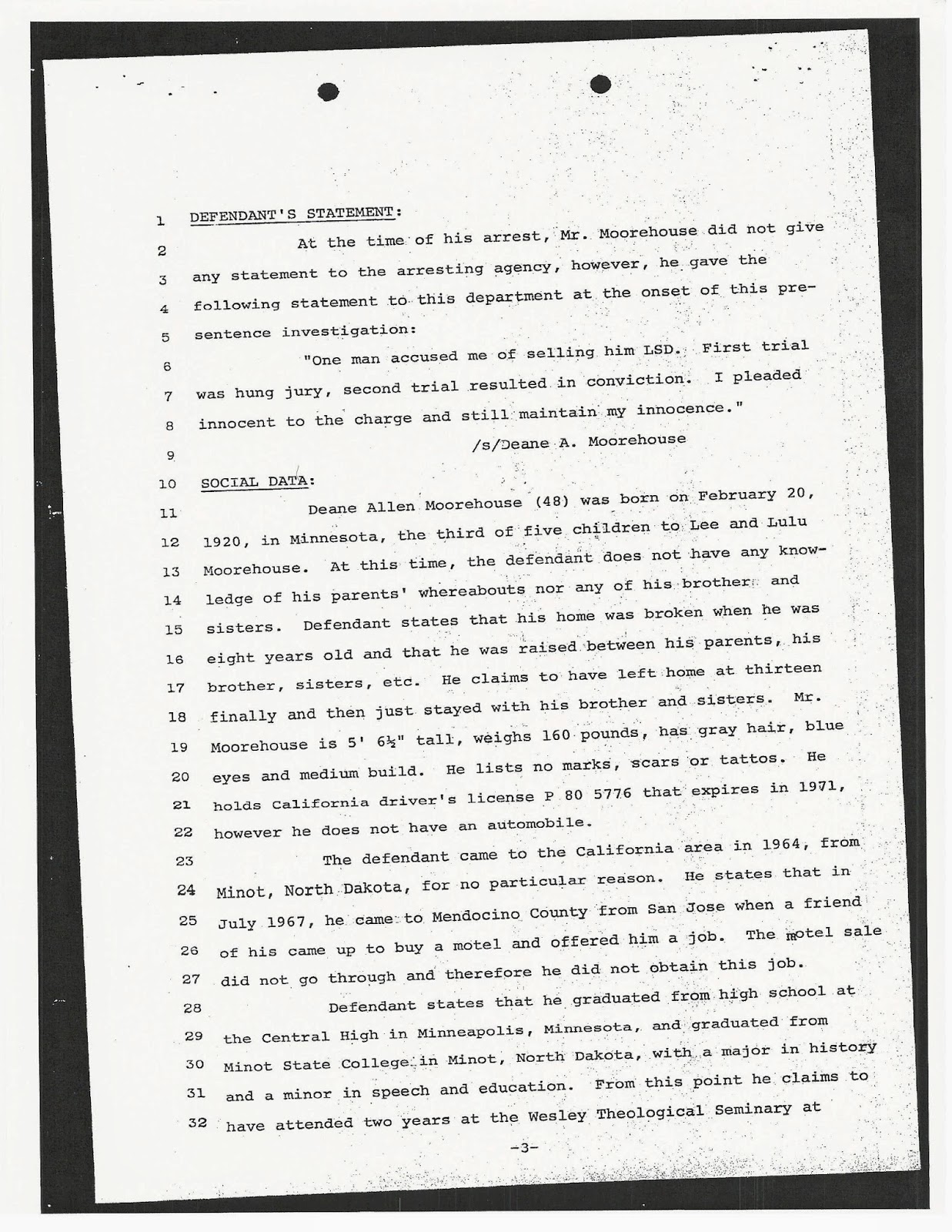 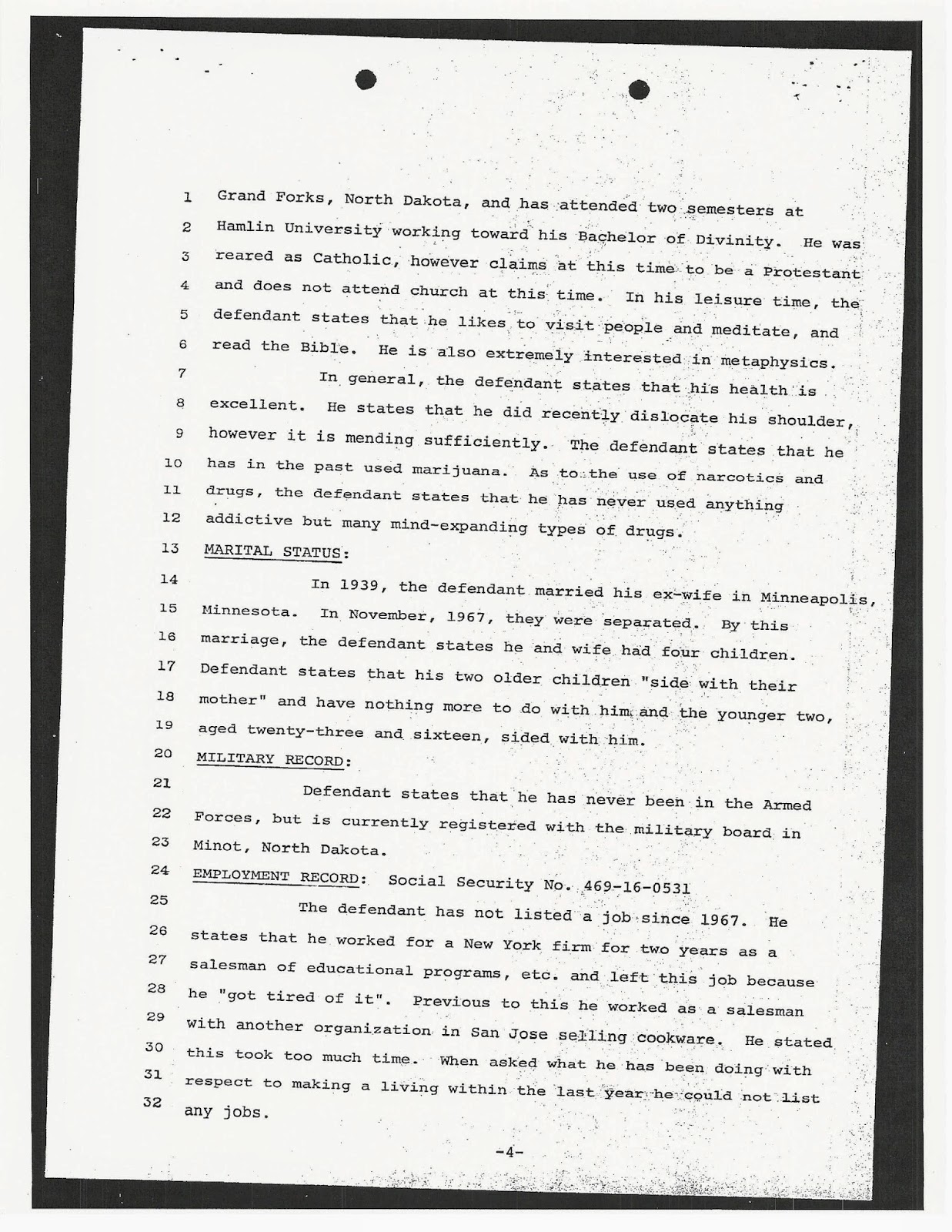 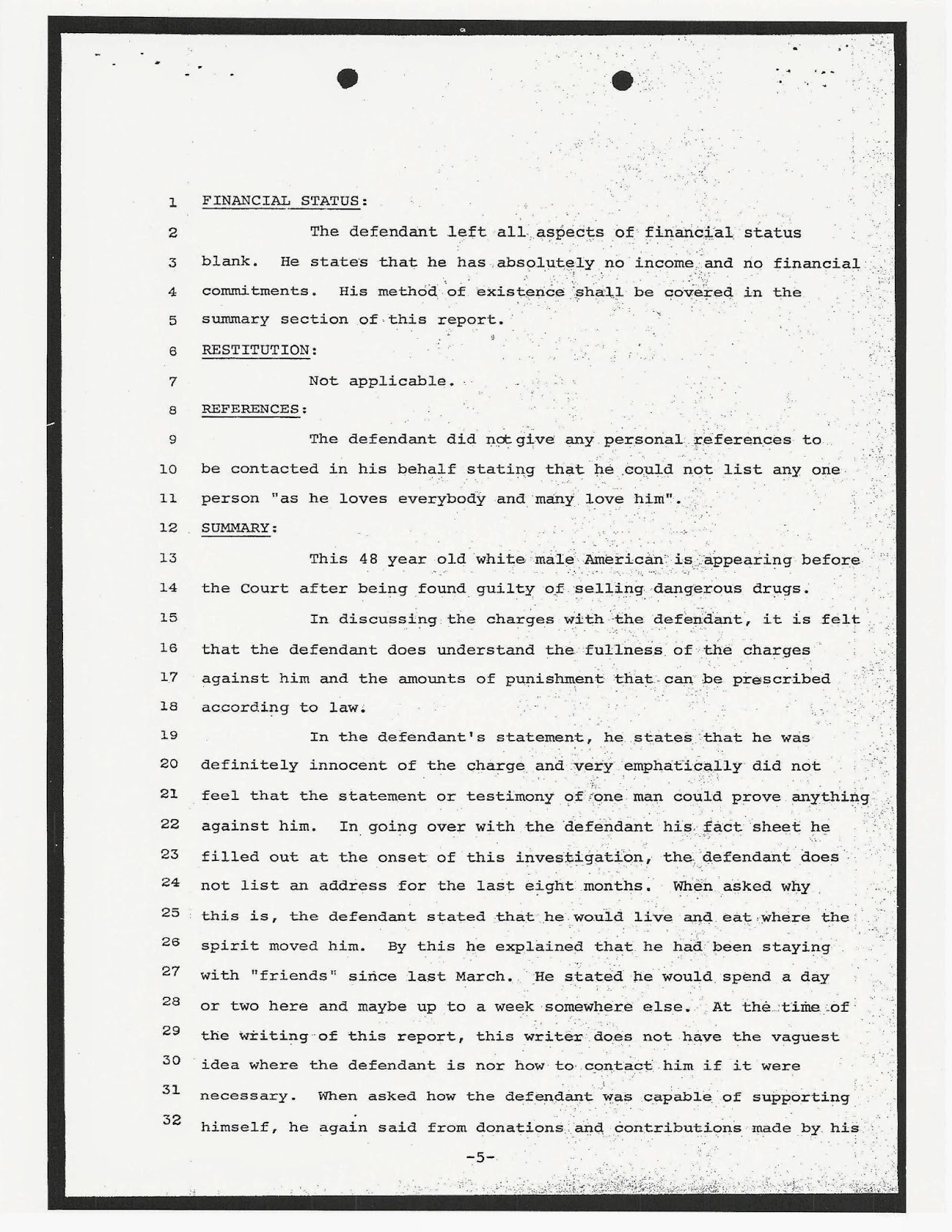 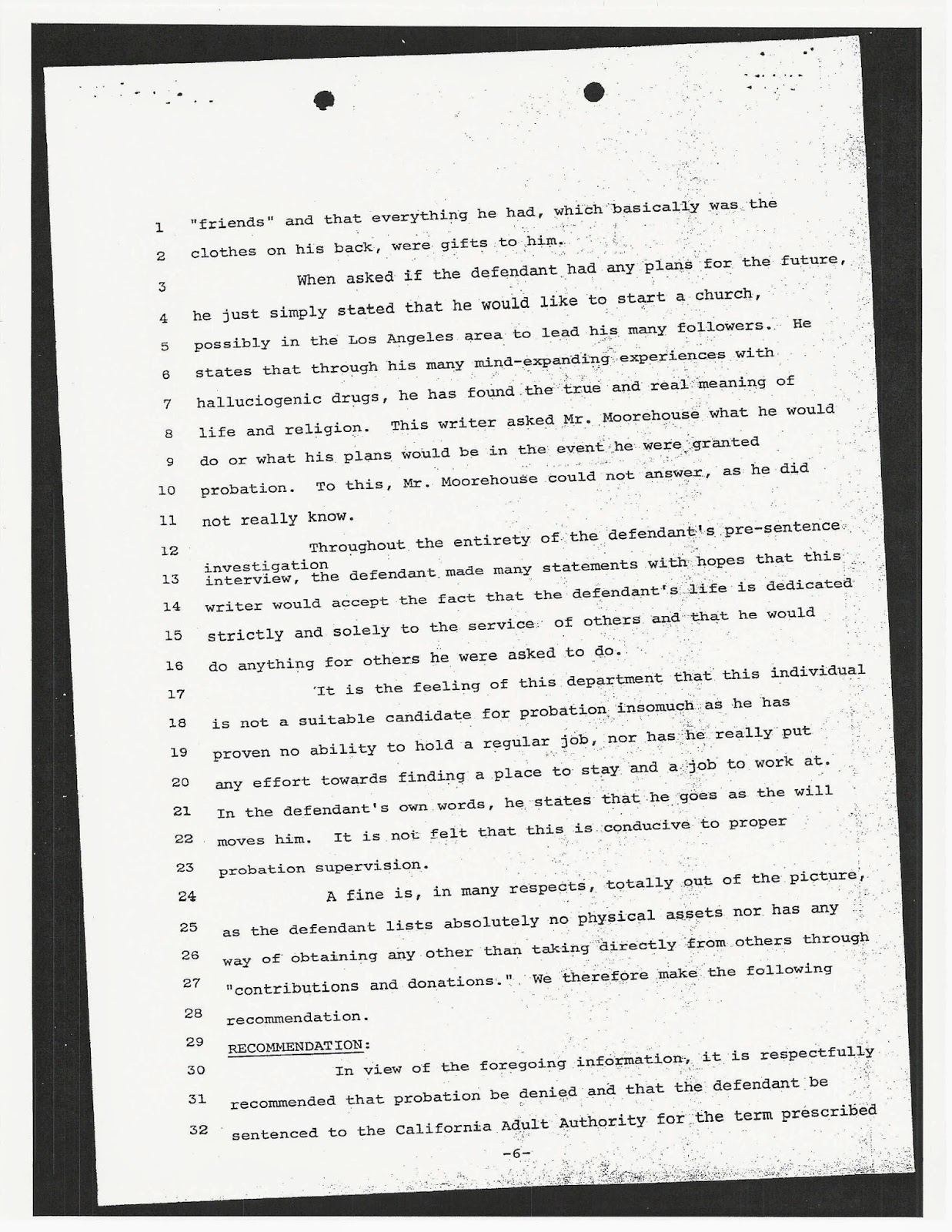 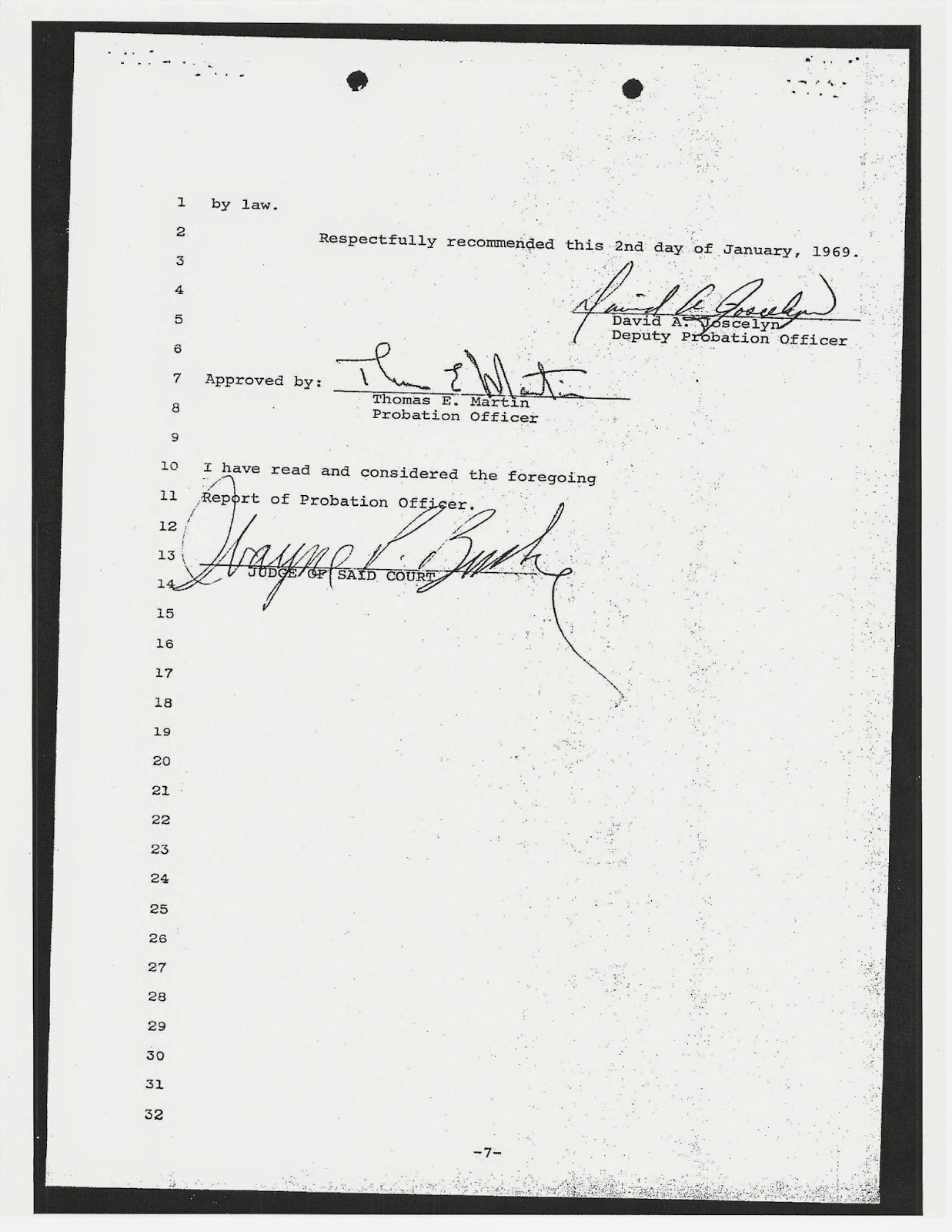 Does anyone know the denomination in which Dean was a minister and whether he actually pastored a church? I'd thought he was a Methodist but recently read Congregationalist.

Gawd, lewd and lascivious acts at age 92?? Thanks for the posting. Fun to read.

Yeah he lived a colorful life right down to the end, didn't he?

In that last mugshot he looks like one of Santa's elves gone horribly wrong.

Lewd or Lascivious acts with a child??? At age 92??? I'd think he's be too busy picking his balls up off of the floor at that age.

Orwhut, I don't think he pastored any particular denomination or church. He just liked to say he was a minister.

Suze he wasn't molesting at that age but since he had been convicted more than once of child molestation he was a lifetime member of the sex offenders list. His last arrest for molestation was in 1991, he served time, was released, violated parole, back to prison and out in 1999.

orwhut said... Deb, You're probably correct. As for denomination, his claiming to have attended, Wesley Theological Seminary, makes me think he was probably a Methodist. I had to look up Congregationalist. If I understand correctly, their churches are more independent and I can see how they might have been a likely choice for him too. So, I'm still uncertain about his denomination.

OK so he was like 71 on his last arrest for lewd and Lascivious with under 14.
Why did Bugliosi or whomever think Moorehouse had lived at Cielo?

He didn't, Gentry just mixed it up

I wonder if his "friends" that were mentioned in the report were Spahn Ranch people?

He got to 92 years old? A creaking door hangs the longest...

Only the good die young, it seems.

How does a bird like this spawn a fine looking woman like Ruth? I guess a sperm that swims all that way to an egg probably knows what its doing.
Sometimes I think Natural Selection is working. Other times I don't know.

Tom G what early pics do we have of Dean Moorehouse and what pics do we have of Ruth after she was 20? Maybe he was good looking or his wife was. And who knows what Ruth looks now? Post a pic please. Ruth might be little overrated anyway.

I don't have a pic, (this isn't some craiglist hook up).

And if she's not, add it to all the other thangs I was wrong about.

She was pretty for sure

As to sex offender age thing: its one of the nastier aspects of the register that it updates the offender's age but not the 'victim'. So you can have a situation where a boy of 9 is playing doctor with a girl of 8. Mother freaks, calls the cops, boy is 'tried as an adult' and put on the register for life. And he will have his picture displayed online and the sheriff's office...he will age, but the girl wont...soon, he's that monster of 40 who attacked a kid of 8...
For ever, he has to check every move he makes with an officer; he cannot stay with family if they have kids; live within a km of a school bus stop or playground; has to carry a card stamped SEX OFFENDER; has to, on moving into a new area, tell everyone within a 1.3 mile radius, by postcard that you are a sex offender new in town...and on and on. Plus you have to pay for all this, every year and if you cant pay, you're jailed and have to stay there til someone guarantees you a job and a home. One kid, he got his girlfriend pregnant one month before she was of age, their first time. They married as soon as they could and were doing great til a busybody noticed the child's age and got the cops. Another guy was done for pissing against a tree at 2 am after a night out. This stuff could happen to anyone.

Its truly shocking how things like this get abused by authorities.

Also here's weird thing. All that stuff about him being in Minot. That was the town in Maury Terry's something of Evil book...I cant be arsed to stand up and check the title....that book, you know the one, rambling and disconnected and needing a serious edit.
oo-wee-oo indeed. Also, the 'type the text' box says 166, which is, you know, nearly 666.

How did this loser get such a good looking daughter?

In response to Moorehouse and sexual charges; he was charged in the 1980's with molesting his own daughters from his second marriage, he served 10 years in prison for this crime and was never arrested or charged with any crimes after that release. I knew him personally and can only say that though it is easy to throw stones, he was actually a very lovable guy. He never tried to hide his past from all of us that knew him and lived the final decades of his life as though he were a monk almost. He was a celibate vegetarian and would give a stranger the coat of his back if asked...LSD certainly did seem to have effected his mind on many issues though and some may even have thought him to be a bit nuts. I know he did things that many will never be able to accept and that is fine but he died after a long and strange life.