Did Sharon Tate Have a Premonition? 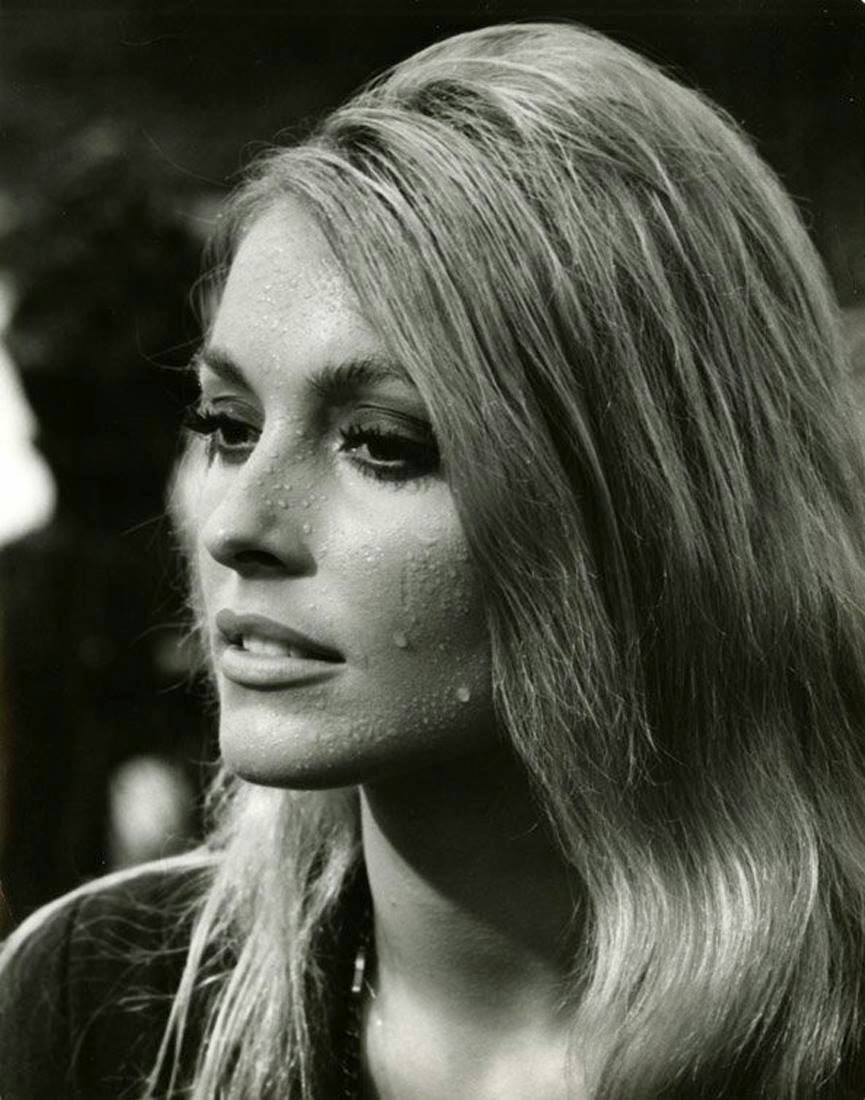 HOLLYWOOD - (NEA) - It was just a creepy story, when Sharon Tate told it to me early in 1966. But now, three years and five murders later, it has acquired something more than creepiness.

She was a starlet then. Sensational to look at. They thought she was going to be a big star. Maybe she would have been. Maybe not. Anyhow, in '66, she was a girl of promise.

But there was something a little strange about her. Everybody noticed it. They thought, at the time, that it was because her first feature was an oddball terror thing called "13" - later they changed the title to "Eye of the Devil" - and maybe she was taking her work home with her.

You could look at her for hours. And listen to the nutty stories coming out of that beautiful head. I like stories of the supernatural. She knew that, and she had one.

It involved Jay Sebring. And the house in Benedict Canyon. No, not the house where she and Jay were killed. That was on Cielo, just off Benedict. But the houses can't be much more than a mile apart.

Sharon used to date Jay. This was before she met Roman Polanski, the man she married. She and Jay went together for a long time. Jay had just bought the house in Benedict Canyon.

The beautiful girl told the story, calmly, matter-of-factly, it seems that Jay was in New York on business. And Sharon was between apartments. She called Jay and asked if she could stay in the house. Of course she could. [NOTE: According to the 1966 story, Tate said that she "had had funny feelings" inside the house, so when Sebring was out of town, she asked if she could spend the night "to see what would happen."]

She was there that night. That dark night. She was alone. She wasn't usually spooky [not a typo], but for some reason she was that night, in that house. She kept a light on, by the side of her bed.

"I saw a creepy little man," Sharon said. "He looked like the pictures I'd seen of Birn."

She ran downstairs. [Note: In the 1966 interview, Tate said that she was sitting in the downstairs den when she saw Paul Bern's ghost. In fact, there is no mention of her being upstairs at all during her paranormal experience.]

When she got downstairs, she wished she was still upstairs.

"I saw a vision of someone tied to the staircase," she said. "It might have been me. It might have been Jay. Whoever it was, it was cut open at the throat." [In the 1966 article, Kleiner writes, "And there were other visions, concerning a man and a woman, which cannot be printed, but mostly it was this vision of a man, seen in detail." The man Kleiner is referring to is Paul Bern.]

She needed a drink, for nerve-steadying purposes. She didn't know where the bar was. Something told her to open a bookcase. Inside, there was a hidden bar. She poured a shot.

There was some wallpaper below the hidden bar. For some reason, she picked at it, tore it away. It covered a lovely copper base to the bar. She wondered why it had been papered over.

Strange, how the mind works. Worrying about things like that when ghosts are wandering around upstairs and mutilated bodies are tied to the staircase downstairs. She thought it must have been a dream. She decided to find out and went back upstairs. The body - (Could it be her, could it be Jay?) - was still tied to the stairs. [Note: The 1966 article makes no mention of a bar, and of course, no body tied to the stairs.]

The creepy little man was still prowling around upstairs.

She went to bed and somehow slept.

When Jay came back back, the next morning, he woke her up. She remembered the events of the night before. It must have been a dream - but ...

"Hey," he called, "who tore the wallpaper off by the bar down here?"

But three years later, a mile up the road, a nightmare. She and Jay were killed. Both stabbed, Three others killed, too.

If she didn't know about the suicide she wouldn't have felt anything.Premonitions and ghosts are bullshit.

I tend to believe in premonitions and ghosts. Now, as far as her seeing a creepy little man, I don't know. How could you just go to sleep after seeing such a thing? I'd have left, and never returned. That house was/is ugly, creepy, and has bad vibes. Cielo house was creepy too.

That I do not agree with you Ann74. The Cielo house in my eyes was a beautyfull place. And for what I have seen (on pictures ofcourse)it was a PEACEFULL place too... but thats just my view

I find the world of the supernatural fascinating and I don't know what role the mind and inner chemistry may play in some of the experiences, whether hallucinations or extremely vivid dreams. And are there really beings in spirit form interacting with people or imprints somehow of previous lives? Yeah for her to go back to sleep after still seeing the man, I'd have to be pretty tired to pull that off.

I can't say that I've ever seen a ghost. If I do, the ghost of Norma Jean Baker might be, nice.

"distinction between past, present, and future is only a stubbornly persistent illusion"- Einstein

Thank you, Phillip. That's a favorite quote of mine and perfectly appropriate.

Although I've forgotten all my high-school science and am reduced to counting on my fingers, I do enjoy reading articles on new research. There's stuff coming out of Stanford that would indicate that parallel universes do exist:
.http://www.dailymail.co.uk/sciencetech/article-2584282/Could-Big-Bang-ripples-prove-parallel-universes-exists-Gravitational-wave-discovery-paves-way-multiverse.html
.
If that's the case, can a person see something that's already happened or is going to happen, because of the "ripple" that Einstein mentioned?

I agree Waving. It's that principle of moments that we understand somehow but go unexplained.

Cielo was definitely a beautiful place, but, I am sure it could of been a little intimidating to sleep there alone at night too. It was very long and spread out. If you wanted a midnight snack, you had to walk all the way across the house to the kitchen. At night, in a
long house with the wood expanding & other house noises could of been creepy. The French actress who had the house built originally was scared living in Cielo too. She had a friend move in with her at one time too, and the friend was scared. Maybe it wasn't the actual homes, but maybe the area. I know the actress Elke Sommer had a house in Benedict canyon that had a supposed ghost in it. I've never been to Benedict canyon, but I've read plenty of creepy tales coming from that area. OO-EE-OO!

Thanks, Matt! Been awhile.

I've had a few, keeps me up at night.
Good read: "Entangled Minds" by Dean Radin.
And why did Einstein have an Ouija board? He attended a seance once.
Guessing maybe he had a few. If anywone was capable it was old "Albie".

I don't know how true it is but the claim made I think in The Family was that August 8th Anton LaVey held a ceremony to curse the hippies and also the Haunted Mansion at Disneyland opened. I looked that one up and it did open around that time if not that exact day-maybe had a "soft" opening that day. Also read online that August 8th the Beatles did the photo shoot for the Abbey Road cover. I think we should sometime "analyze" Abbey Road's songs to see the hidden Charlie messages in it-was She's So Heavy the sequel to Sexy Sadie? I'm kind off topic here sorry.

Just heard they are going to demolish Adam Lanza's house. Remember the Sandy Hook massacre.
That sparked my remembering when the Fire Department actually stood -by and watched the Spahn Ranch BURN.

The Family was there and told the story of the Firemen doing nothing and purposely letting the Manson Family home burn.

I can understand the CITY wanting to get rid of such a notorious place, BUT are WE (as a people) still in such fear of Satan (the Devil) etc. that WE must treat such material objects as "possessed by EVIL spirits" that can actually do US further harm?

I tend to agree with AustinAnn74. Cielo Dr always struck me as a little creepy. Not it's grounds or secluded position, but something in the design of the house. It was a long, rambling house with a long shadowy hallway. It wouldv'e creaked like a bitch in the quiet of the night. The fact that the living room had exposed wooden beams across the ceiling would've provided the feng shui -ists with a field day. Exposed beams or rafters inside a house are a no-no because they are supposed to create bad vibes, generally speaking. I can't recall if anyone mentioned the feng shui angle after the events of August 8 when stories of the "rope over the living room rafter" were reported widely in the press.
Ofcouse, Tex Watson knew the living room had exposed beams , already knowing the layout of the house. They were no more than a convenience to him to throw his rope over.
Apologies if I have spelled feng shui incorrectly.

During the day, the numerous windows at Cielo would of provided a sunny, warm atmosphere, but at night, those same windows could of been extremely nerve racking. SusanB, I completely believe in Feng Shui.

Beauders & Humphrat: Interesting you mention that idea. I too would like to hear and see all those interviews.

What and Why I felt about the MANSON mystique 40 years ago may even hold some surprises for me.

Remember, I was NOT a journalist at the time, BUT just a guy like anyone of you who just "happened" to be in the right place at the right time to capture "on film" the most incredible news worthy story of a generation.

I still don't know if that was a curse or a blessing, BUT it sure has taken me to places I never before knew existed.

When I read this blog, something seemingly insignificant to most of you folks "triggers" a thought in me that sheds even more light on perhaps the most mysterious continuing event in OUR lifetime.

If you really THINK hard about it: Is there "anything" in life that the MANSON subject does NOT, at least, touch upon?

Thanks Guys, you ALL have something worthy to say and I really appreciate that.

Does anyone know is the original interview available to read anywhere?

Really? Did no one see this? LOL