Blog reader Matt pointed me to this:

The below image and quote were gleaned from a freerepublic.com forum post titled "Two Ferguson offers shot as very dangerous environment persists"

For those not familiar with it, Free Republic is (in my estimation) a radical right wing conspiracy-based forum where radical coo-coo birds pop off about anything slightly left of center.

For instance, Free Republic has been involved in several organized conservative campaigns including against CBS anchor Dan Rather and against the Dixie Chicks for their antiwar statements. The co-founder of the site's name is Jim Robinson. Anybody remember that name? I'm sure it's just a coincidence, but I digress.

Anyway, I find it very interesting that Charles Manson is elevated to prophet status by a commenter on a right wing forum to support (what seems to be is) an end times argument based on the happenings centered around Ferguson, MO. 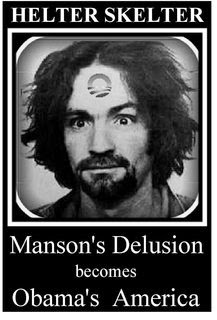 "I found this image on the web, knowing that Manson had predicted a race war. The energy has been bought off with increasing racial set asides and other benefits for years. That time is ending. Now we have people who are exciting the situation without any good reason.

Racial leaders must step up NOW to calm this situation. If they delay this effort, they are aiding it"

Krishna Venta:
1) Visioned a black/white war (in 1965)
2) Wanted to assemble 144,000 to hide in a hole in the desert for 40 years (he later changed it to Alaska, when he realized Alaskan land was cheaper)
3) he and his followers would emerge as the only whites living, aside from the Russians, and they would help the blacks take out the Russians.
4) Krishna took this from Revelations, and saw himself as jesus Christ.

Charles Manson:
1) Spoke about an upcoming Black/White war.
2) Supposedly attempted to get 144,000 together to hide in the Devil's Hole for 40 years and emerge when the war was over.
3) They would emerge as the only whites left, and then take the world away from the Blacks.
4) Charlie supposedly fancied himself as JC

How did this happen? Well according to Brother Jon Fisher, member and preacher at the Fountain of the World, HE would sit with his father Isaiah and smoke pot with Manson, Paul Watkins, and the rest of the Family about Krishna Venta - and Fisher said a LOT about Venta's vision of the war.

Fisher said that Manson was an ABSOLUTE member of the Fountain of the World as an entry, probational... and fucked it p by offering weed to the kids there. HE was kicked out, the Family was not. Manson convinced them all to leave and they did - to Spahn.

After the killings we know they went back.

Fisher said that the members lied to the police when they were questioned, and told them the Family was only there for 3 days when it was more like 3 months.

Matt, I know I'm a troll and I've called you a pussy in the past, and you have every right to delete my comments, but a big Thank You, to a poignant and profound point! Cuntry trash, it makes no difference whether Charlie heard it from Krishna Venta or the Bible chapter of revelations, like Clarence Ashley and Dave Van Ronk, who brought the song: 'The House of the Rising sun' into the American conscious, Charlie saw things before they became trends, not 100% original thought, but knowing when that thought applies to the times, is somewhat Prophetic.

No harm no foul Espo. Lay off the ethnic insults and we can get along fine.

I read somewhere the reason Charlie called off the wedding is because he found out Star wanted possession of his body after he dies so she can display his body ala Stalin and charge admission to view him. Did anyone else hear this?

Jody, that story was so ridiculous that we never even mentioned it. Just tabloid fodder.

Maybe he called off the wedding because she had poor attendance at her debutante ball.....

Doc that was so effing funny!

That's what I figured, Matt.