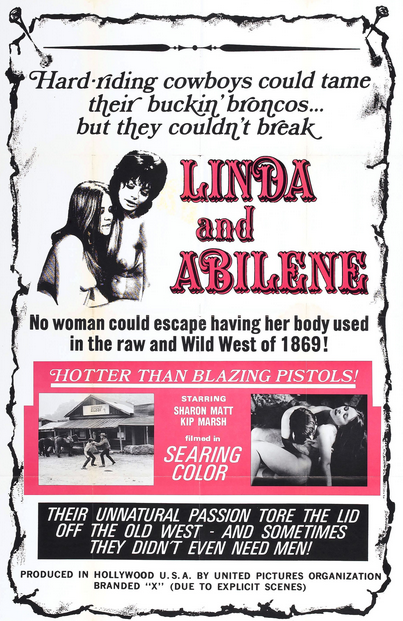 Please allow me to present my latest (or only) movie review on this great blog of ours. I give you "Linda and Abilene" from 1969. This particular soft-core "hair fest" was filmed at the late, great Spahn Ranch when certain, particular weirdos were in residence. Some of the features of this celluloid shit pie include:

In closing, this movie is so hideous, it makes "The Ramrodder" look like an Oscar winner. Other than seeing the way Spahn Ranch looked back then, and discovering that Bill Vance actually had blue eyes, this thing almost put me to sleep. Like I always say, though, "to each their own!" Netflix is currently streaming, if you dare to watch! 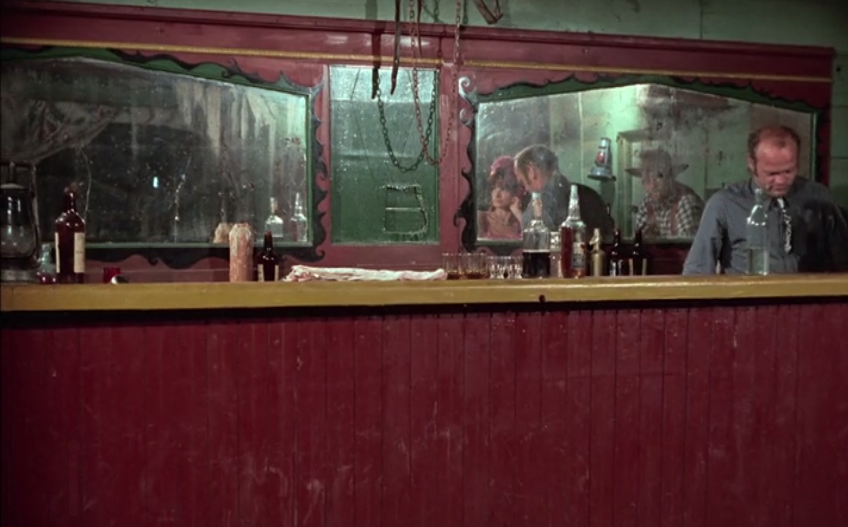 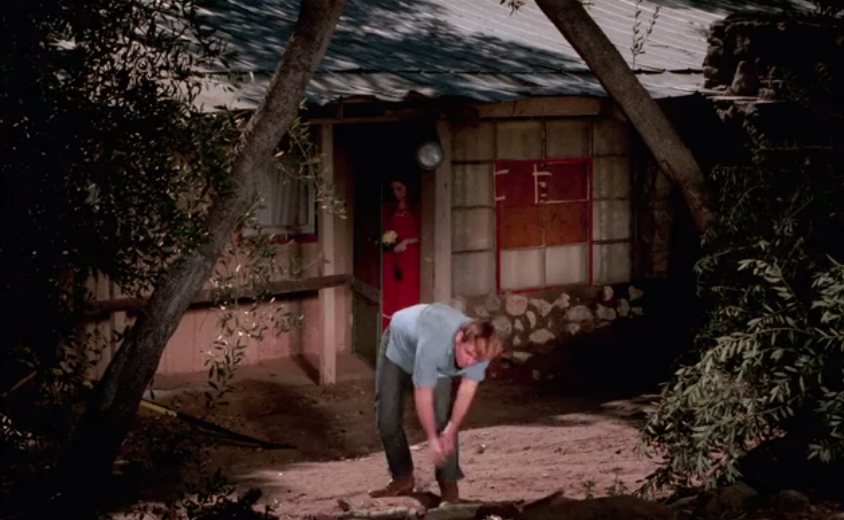 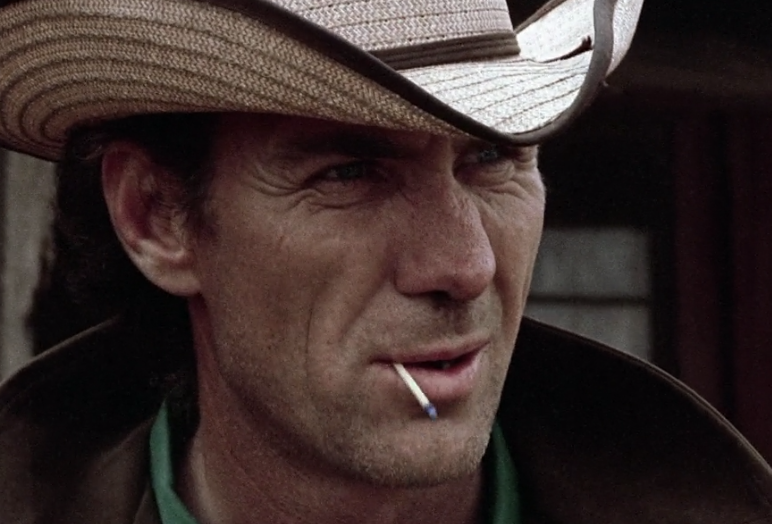 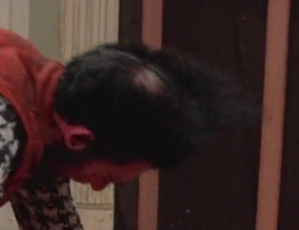 Flap-comb-over-squirrel-roadkill, balding "thing" atop of head

Lol...I love the review! I laughed out loud. Ive got to watch this thing . Pimply man buttocks....Eeeeww.

I will be the first to comment on this. Uh, I still haven't figured out the flap-comb-over-squirrel-roadkill-balding "thing atop of laughing rapist's head. If you have seen this movie, you'll be trying to figure it out too. It looks like a yorkie.

You shouldn't be so hard on filmmakers for stupid mistakes. Just look at "Private Ryan" by the most respected director in Hollywood. Everyone who ever served in the military cringes when they SEE that movie.

AND Robert Duval wearing that bright orange scarf in Appocolipse Now. I guess it's a good thing Hollywood types are excused from service.

This sounds like the type of "so bad it's good" vehicle that mr.humphrat might like. From what I can see it looks even more unintentionally campy than "Ramrodder".

OMG, I only just read that it was directed by Herschell Gordon Lewis, the high priest of kitsch, with films such as "Goldilocks and The Three Bares","Monster A-Go-Go", and the gorefest that is "Gruesome Twosome"! (Yes, I have a penchant for truly bad cinema, I confess).

Bucpaul,
Don't forget The Blood Trilogy: Blood Feast, 2000 Maniacs, and Color me Blood Red. I love that kitch too.

I had this idea to round up all the relevant footage from films and TV-series filmed at Spahn Ranch. Like my other Manson related projects, it fell through when i snapped back to reality and i realized i had things to do.

There's a list in Reel Cowboys of the Santa Susanas.

I am glad most everyone enjoyed my review. I found this by pure accident while looking for something to watch on Netflix. I looked it up and also found out Bill Vance was in it, so I had to watch.

It was the weirdest thing, Miss Patty. I was sitting there, in the waiting room at the hospital, waiting for my mom to come out of a procedure and I got on Netflix and that caught my eye, because I remembered seeing a poster of it on a Manson ATWAR tumblr page. So, I watched it at the hospital and laughed out loud numerous times. I also rewinded, paused and fast forwarded. It's a riot, man.

I am so pleased you enjoyed the review. I guess I should of had a spoiler alert though. :)

It's along the same lines as The Ramrodder. Very campy and unintentionally hilarious!

You shouldn't be so hard on filmmakers for stupid mistakes. Just look at "Private Ryan" by the most respected director in Hollywood. Everyone who ever served in the military cringes when they SEE that movie.
-----------------------
Hi Robert,
I'm a vet and I found Saving Private Ryan pretty much dead on as far as military language and attitude. What is it about this movie that you find inaccurate?


Great review, AustinAnn - and you are right - I can stream this at Netflix - don't even have to wait for a mailed DVD.

Warm up the popcorn and sand the ass pimples,
I'm watchin' this tonight! =D

Hey BucPaul thanks for remembering! This would be worth seeing especially since Bill Vance was in it.

I watched the movie on Netflix on my phone. Haha....That would be funny is they played it at the hospital. Haha!!!!

So it was found by "Happy Accident." Sweet! Thanks for the tip xoxo

Never mind his hair...in the shot of the rapist, his ear looks like very inflamed and swollen butt hole!
And before you ask, I'm a nurse. I know what Im talking about....unfortunately.

Couldn't find on Netflix, but it's available at http://www.truvafilm.com/linda-and-abilene-erotik-film-izle - not too bad an image either. I had a quick scan - it looks terrible.

I just looked again on Netflix. It is on there still.

Maybe it's the butthole of the squirrel! Hahaha....

RH were you at Normandy?

Saving Private Ryan has been regarded by so many people (incl. military who were there) as pretty much the way it was - see for example http://www.dday-overlord.com/eng/saving_private_ryan_relations.htm.

Can you substantiate your claim that "Everyone who ever served in the military cringes when they SEE that movie"?

And much as I admire Spielberg, I would hesitate to call him "the most respected director in Hollywood". But that's probably down to choice.

Ann, what you see on Netflix depends where you are! I'm not in the US right now so I guess it serves me up other choices. For better or for worse.

Oh, I see. I'm so sorry you can't enjoy this feature. Where are you, may I ask? Have you tried to Google it to see if you can see it somewhere on the net?

You hit the nail on the head ANN, where's my sense of humor ? I had NOT even realized I lost it.

Keep-up the good work ANN - and I love YOUR stories about the invasion of AUSTIN by Aliens.

Maybe it's TIME for a movie about a small Texas town being overrun by remote controlled Dune Buggies ?

AND only a White cowboy disquised as Black politician (going thru transition) can save the day.

I'm in Patagonia, Ann. But as I said, I (and anyone) can see the movie in its entirety at http://www.truvafilm.com/linda-and-abilene-erotik-film-izle.

Hmmm. That sounds like a good idea, Mr. H! Overrun and taken over is more like it. Buda, Texas, which is right outside of Austin is almost completely out of water now, because of the invasions. Our lakes look like moon craters and now where there used to be rolling, green hills all you see is tract housing. It's sickening. Today, in the news invaders are now bitching & moaning about all the BBQ smoke in downtown Austin. People come here, take over, then want to completely change the culture and mood of an entire area. Downtown yuppy condo dwellers bitch about the loud music and now BBQ smoke. Austin, Texas no longer exists.

I think I hate the KardASSians more than anything else on earth. I don't watch their moronic shows, buy their sweatshop-made clothes or purchase any of their cosmetics & perfumes. Anything that helps them achieve more wealth, I am against. Ah, if only I were king or queen for a day.....Anyway, Candy, I know what ya mean. I'd much rather watch movies like Linda and Abilene & The Ramrodder any day of the week.

The film stock on this project tried to hurl itself off a shelf into a fire. That's just how depressed it was.

Maybe because I'm drunk off my ass, or maybe because I'm just warped anyway... I.Can't.Stop.Laughing. at this post/review. Off to Amazon to see if the DVD is for sale, don't have Netflix. Already have stellar Oscar also-rans "Ramrodder" & "The Other Side of Madness" (not to mention "Beyond the Valley of the Dolls") eating up room on the shelf...

And LOL -ing at Doc's comment about razors. The first time I went to Esalen's hot baths was in '95, with my "ex", a singer/songwriter/musician of many years, including his claim to fame in the 60s, who knew most of the cast of characters in this saga. We were there from 1-3:30a, the open to the public hours by reservation. Gorgeous cliffside baths, water rolling in underneath, moonlight, great pot, & then... every time someone walked up and spoke to you ("Do you mind if we..." "Any room here...?"), they'd be at eye level, & Jeeezzzuusss... you'd open your eyes... and HAIR!!!! (NOT beautiful) HAIR!!! And I remember my exact words to him were: "Doesn't anyone own a g.d. razor?!" Ugh. I used to spend summers with my godfather in Vegas and Topanga as a teenager in the 70s, & from perusing his Playboy mags in the can, decided at a very early age that the 80% Brazilian was the aesthetic for me.

Hi Trilby, I lived in Monterey County for a few years. I drove past Esalen many times but never went in. My former girlfriend and I used to go to Nepenthe now and then. There's a restaurant in Big Sur that has patio furniture in the middle of a creek and the wait staff will take your order and bring your food to the creek. Have you been to the free box or the hippie shower? Big Sur is one of my favorite places on Earth. Man, I miss it. I need to go there for a road trip.....

Trilby, that is hilarious!

Watched it last night. Absolutely boring when it was not being horrible.

Only reason I watched it was for outdoor shots of Spahn in '69 when it was filmed. They are few and far between.

Wouldn't recommend anyone waste their time on it.

@ Chimpydork: Now you mention ,,Citizen Kane,, first to my mind came the docu-film ,,Citizen Shane,, its about a local who wanna be a Mayor in his little sleepy town.....and the Guy correspondence and phones with Manson in that Docu.....Maybe interesting for those who did not see it before....

I have to give you credit Ann. You've got far more patience than I have. I made through roughly 15 minutes of this travesty of a film before I gave up mainly to see the old Spahn scenes. It's simply amazing that anyone put up a dime to shoot this dog of a film. I guess having the 1969 Spahn footage is something. Otherwise, I suppose this can also be used for film students in what not to do.

Mr. Groove, did you get to see the roadkill on top of the laughing rapist's head?

Does anyone recognize the music played during the parent's funeral?

Yup Anne. How could I have missed the roadkill atop the rapist's head? Pathetic. I guess the performer's hair stylist called in sick the day of the shoot.

orwhut the tune sounds similar to Red River Valley but I know it's different.

Mr. Humphrat,
Thank you. That might be why the tune seems so familiar. I've searched every way I know how and can't find out the name of the tune.

Neat shot of Back Ranch where the Family sold tires purchased with stolen or borrowed charge cards. There was a Creek and bridge behind the house.I used to tell others of a log type upper structure that intersected and there it is!!!. The paths were well developed then and horse Corral's existed behind the back ranch