While serving time at Vacaville Prison Steve Grogan played lead guitar, harmonica, slide guitar and sang on an album titled Fathers and Sons by Vern McKee and the Hard Time Band.  It was released in 1981 by Blue Denim Records.

Grogan also contributed to engineering and producing the album.  He has one song of his own on the LP.  It's titled Prison Blues.  The rest of it is country and Vern McKee is the lead singer.  The other members of the band were Steve Holland, Darryl Harris, Ricky Palapaz and Alphy Omega.  McKee was in prison for murdering a cab driver in central California in 1972.  He has since passed. 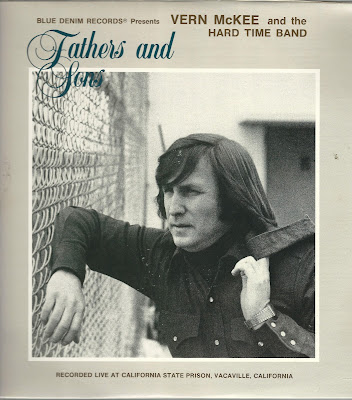 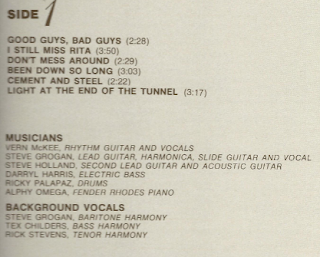 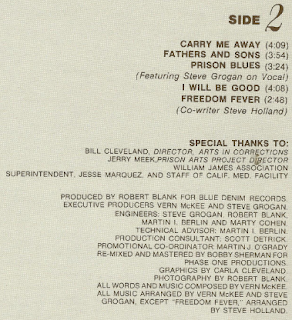 Thanks to Jon Aes-Nihil for converting this from the LP to a CD!

Cool stuff. If anyone is into blues music i recommend picking up the Mitch Woods live in Istanbul cd/dvd. Grogan plays lead guitar on that and he is very very good. That is.. if you can put aside all the unpleasantness of knowing he murdered a guy

But why Gerard Depardieu on the cover?

"But why Gerard Depardieu on the cover?"

I burst out laughing when I read that!!

I think we have to be grateful that Bobby B wasn't in Vacaville to add his highly dubious instrumental and vocal talents.

Inmates being allowed to do these kind of projects must be a further kick in the teeth to the victims' families, particularly when the work is publicly available.

Anyway, thanks to Jon Aes Nihil for converting the format.

"...Grogan plays lead guitar on that and he is very very good. That is.. if you can put aside all the unpleasantness of knowing he murdered a guy"

Agreed. He was probably one of the more genuinely musically talented out of the lot of them. I was listening to Brian Davis' most recent interview with Nikolas Schreck over at Star City Radio, and Schreck recounts the story of approaching Grogan after his release to join his (Schreck's) band. But he also spoke of questioning Grogan about Charlie and another returning to Cielo in the early hours of the morning, and Clem started to obfuscate. Assuming it wasn't Clem, it's a pity he is not more forthcoming with information. It looks like he knows plenty, but he only gave sufficient to obtain his own release.

Terrapin, I love the blues and have that Mitch Woods CD/DVD set. It is very good. There is no doubt that Grogan has talent.

"But why Gerard Depardieu on the cover?"

I have had this LP for like 2 years now, but never listened to it. THANKS for posting!

Michael Hloušek-Nagle said... But why Gerard Depardieu on the cover?

I wonder if it had to do with somewhere Gerard might have whizzed.

Damn, I think I'm losing it. When I saw that guy on the album cover I thought "He looks familiar."

Then I saw the Gerard comment and thought: "That's him."

I clicked back to the "cover" and thought: "OMG he was in prison too "

Then I thought: "Why did they hire an actor for the cover ?"

That's it - I'm sticking with something I know about - like Helter Skelter and the three bears.

Are you hinting Pooh-bear may hold the key to unlocking the HS myth?

I did a google search on Vern McKee and found a short piece titled "Vern McKee – A Prisoner’s Rules for Accountable Arts Engagement". Here's the link -http://williamjamesassociation.org/prison_arts/vernmckee/

Anybody know what McKee was in the slammer for?


Michael SAID: "Are you hinting Pooh-bear may hold the key to unlocking the HS myth?"

Could Robert H be referring to the three bears of 'Goldilocks and The Three Bears' fame? It could make all the difference to the mystery that is Helter Skelter!

My bad. The answer was right there in the post. As a former cab driver I hope he never got out.

No, equinox - as you know full well I'm referring to Valentine Michael Brunner-Manson No-Name Maddox III Jr, or whatever his official name is - aka 'Pooh Bear'.

Matt, wherever he is now, he sure as hell won't be getting out.

Ah, I see - THAT Pooh Bear. He is well and truly alive, so give him a ring and he might unlock the mystery of HS for you.


(I thought with you being the proud dad of the lovely little person in your photograph, that your mind would be programmed to the adventures of Winnie the Pooh and Goldilocks and the Three Bears).

I drove a taxi during my college summers. It was in a NY resort area on the night shift. Most fun I ever had on any job. I couldn't pay my bills doing that now, but the memories are forever.

McKee was charged with the murder of Vincon Jack David, 52, a cab driver who had driven McKee to Fresno from Madera. The murder occurred just after midnight December 30, 1971. David was shot three times in the head. David himself was an ex-con who had served time in San Quentin for rape in 1945. This, of course does not excuse McKee of murder.


According to a March 18, 1976 Oakland Tribune article about the prison arts program, McKee had previously done some prison time, though it does not say what McKee had been in prison for that time.

Deb is a fokking rock star.

I actually had to look up that word obfuscate. I guess you learn something new every day, huh?

Yeah AustinAnn, these Brits keep us on our toes don't they? I need a dictionary close by too!

Suze, I always thought only under-endowed men over-endow their vocabulary. So I try not to use nerd-words. Kinda like big-car-small-dick-syndrome.

"Suze, I always thought only under-endowed men over-endow their vocabulary. So I try not to use nerd-words. Kinda like big-car-small-dick-syndrome."

The importance of the locations is, of course, leading to possible premeditation on the murderer's part, in that the distance between Madera & Fresno was covered in approximately 25 minutes time, sufficient to plan to rob and/or murder the taxi driver.

It is ironic that if one Google's Vern McKee, you will find numerous articles about the arts program he is credited with starting, but very little on the life he took. Art over life, a sad commentary....

equinox, I shall endeavour to refrain from expostulating my thoughts on your terse feline sarcasm.

If you want to call me a hissy little bitch, go ahead! ;)

"It is ironic that if one Google's Vern McKee, you will find numerous articles about the arts program he is credited with starting, but very little on the life he took. Art over life, a sad commentary...."


Well said!! It is the same situation with Bobby B marketing his so-called 'artwork' and 'music' through various social media. Gary Hinman was also a musician, but Bobby soon put paid to that. During his parole hearings he talks widely about his 'artistic' endeavours, but you hear little in the way of remorse for his victim.

"If you want to call me a hissy little bitch, go ahead! ;)


Thanks Michael. I usually pay large sums of money for those kind of services;)

In Stanislaus County, there is only the county detention facility, but because of Prop. 47, many county jails are now housing long term inmates that would have traditionally gone to a county facility. The closest prisons to Stanislaus County are in San Joaquin County, the next county over. It hosts both Juvenile Correction Facilities (2), a medical detention center, and the Deuel Vocational Prison in Tracy, which of course, Grogan and Beausoleil called home.

Here's one to ponder: LSD came out in the early 1960's and it didn't take the CIA long to realize it's potential in connection with the use of mind "control."

In fact, because over 50% of us soldiers in WWII shot over the tops of enemy heads, some sort of mental stimulant was NEEDED to lower that percentage.

It has been well documented (re: CBS 60 minutes, etc.) that the CIA was experimenting with LSD and other drugs to develop a method for mind control.

So then in 1969, along comes this guy called Charlie Manson, who according to the smartest Prosecutor in the land, succeeded in developing the EXACT scientific method for "mind control" (brainwashing others to KILL for you) using "LSD")that the most powerful government agency in the world could NOT accomplish.

Seems to ME that IF the CIA had NOT reached the level of success, regarding LSD research that some dirty old ex-con actually completed in 1969 with a 100% success rate, the CIA would have, at least, contacted MANSON or Bugliosi regarding this matter.

BUT hey, we're talking about the same "government" that has spent over ten years conquering the Middle East only to GIVE it back to the NEW and IMPROVED Islamic State (the original Black Muslims born out of ancient Egypt.)

Cause IF it was the later, you only have to look at Greece to see where a once GREAT civilization can end up.

A very thought provoking comment there!! I didn't realise you were also a WWII veteran - I knew you had done our time out in Vietnam.

I have read elsewhere that the LSD distributed by Charlie was the same variety as used by the CIA. Were the CIA distributing LSD on the streets to try to discredit the hippy movement?

Pat Krenwinckel did say during the Diane Sawyer interview that when CM was handing out the LSD, she can't remember him taking any.

I've always thought that Manson would be very useful to the FBI due to the circles he moved in, both counterculture and celebrity. He was certainly given plenty of latitude during 67-69 for someone who was out on federal parole

Bugliosi must have taken a lot of previously undisclosed information with him to the grave. Our only hope is that he perhaps revealed some to Linda Alvarez, and for a nice publishing deal, she just might reveal it.

I'm pretty sure when RH typed "us soldiers" he meant U.S. Soldiers.

WOW, good catch EQ and CC. AND what a difference us verses U.S. makes.

So what is the difference between "black people" (re: Bugliosi HS) verses "Black Muslims" (re: Watkins HS) ?

He alawys had some kind of scam going. So one say HE tells ME he's going to San Antoneio Army base for weeks of testing. He said it will be a vacation - just take some pills and have fun out on the town - every day and night.

I kind'a warned him, but back then hardly anyone knew about "drug" testing (re: LSD) in the Army.

I know most folks STILL think our sacred CIA and Military would NEVER use soldiers as guina PIGS, BUT remember the EVIL communists were going to take over the world and make LBJ go back to shoveling cow shit out of barn stalls.

AND apparently, the CIA was too stupid to consult with the ONLY known existing successful "mind control" MASTER. So maybe that's why WE lost the Vietnam WAR.

More to come, but I'm waiting first to see Bugliosi rises from the DEAD.

LMAO. RH is usually so careful with his capitalisation!! It's sort of the hallmark of his posts. It had crossed my mind that he wouldn't be old enough for WWII action.

For shooting a gay cab driver in a bar for rubbing Vern's leg. RIP uncle Vern u r missed and loved excellentalbum

love hearing this. my husband sends his belated condolences on the loss of Vern. He knew Ricki's grandma. "i was his drummer on "Father's and Son's"
momii palapaz