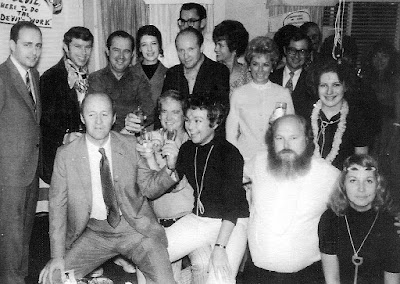 
The most offensive thing to me in this picture is the guy dressed as Steven Parent. (back row, center)

Great photo. The three reporters dressed as the girls are Mary Neiswender, Sandi Mettetal, and Linda Deutsch. Neiswender is on Hughes' right, Mettetal on his left, and Deutsch is standing behind him. Mary had a pretty good relationship with Manson throughout the trial. Deutsch, of course, spent her entire career covering this case. And whether you know it or not, Mettetal has been a great friend to us all. I can't think of any other person who has singularly helped me more.

Just noticed the Buck Knife in Sheath hanging from the ceiling in front of Deutsch...classy.


The guy standing next to Bugliosi looks like a you Burton Katz. Any chance that's him?

Do they have leather thongs tied around their necks? That's sick.

YES Ann, even sicker, cause they are "toasting" in celebration, but to who or what ?

Maybe this should be the "sign" that it's time to take the gloves OFF !

Anyone have a photo of the celebration after they got rid of Merrick OR Howard ?

MOST telling, THEY are NOT mocking Charles Manson, BUT only the Manson Girl Defendants and acknowledging "TEX" via HIS Devilish "MOTIVE" speech to HIS victims.

The ONLY relevance to C. Manson here is RONALD HUGHES (who was ONCE Manson's attorney) Everyone knows Mr. "B" was a publicity whore, but Hughes - well I guess anyone stupid enough to go swimming in a "flash flood" river in winter is stupid enough to get in bed with the Prosecutor.

I can't get enough of this pic, it might be the most confusing piece of the whole damned story....

YES B-L-in-S - It just does NOT get ANY better for ME.

Look at where Ron Hughes (GIRL defendant attorney) has HIS arms and hands !!!! He's ALL set-up for TWO hot chicks tonight.

I'm checking the "gag-order," BUT I'm sure it does NOT include whispering "sweet-nothings" in reporter's EARS.

Well done for uncovering this! Yes, there seems to be a conflict of interest here given that it must have been mid-trial. Neither Bugliosi nor the defence attorneys should have been socialising with the press.

Given that Stovitz was removed from the case due to continuing to talk to the press, I am surprised (or maybe I shouldn't be) that Bugliosi got away with this.

I bet you're green with envy about that:)!

"...Anyone have a photo of the celebration after they got rid of Merrick OR Howard ?"

Sadly, the fate of Merrick is one of the forgotten aspects of TLB. Is his case still open? There is no doubt in my mind that he knew way too much.

"...And whether you know it or not, Mettetal has been a great friend to us all. I can't think of any other person who has singularly helped me more."

Big thanks to her then. Your site is an immaculate resource for TLB researchers.

Nice find! Not that adults shouldn't be allowed to party but it is got to be an ethical beach to do what Hughes was doing. Yikes. BTW HSF are a bunch of thieves.

Where the sign "doing the Devil's Work" may properly apply to the immediate figure of the Prosecutor, the upper portion of the photo reads "real" on the photoshop scanner.

A while back I was talking about when I was with CBS Television News covering the Charlie Manson murder case in Los Angeles and a Halloween Party the press corps held during the trial.

It was mentioned there was a photo of me "drunk with a lady reporter on my lap." I believe the attached photo shows just how much truth there was to THAT rumor.

If you look closely, you can see the handcuffs on my right wrist and, yes, those are 70s hippie striped bell bottom pants. I had blocked that from my memory completely.


One of the reporters sent me a CD with clippings from the trial and some pictures from the party so it was a memory jogger for sure. ---Chuck Boyd

Robert have you ever heard the theory that one of Merrick's students and possible lover, Veronica Compton actually murdered him? Compton is an interesting figure in that she became the girlfriend of one of the Hillside Strangler's, Kenneth Bianchi. They decided at one point to do a copycat murder in order to free Bianchi. He filled the end of a finger on a rubber glove with semen and gave it to her, hid in a book. She then travelled to Washington State, met a woman at a bar, they went to Compton's motel room, where Compton tried to strangle her. The victim was able to over power Compton and got away. I believe Compton was caught trying to flee at the airport. Compton spent twenty or so years in prison and was released around 2000. She also became the girlfriend of Sunset Slayer Doug Clark and friendly with Clarks accomplice Carol Bundy when they were in jail in Los Angeles awaiting extradition and trials. Stranger that fiction. I don't think Compton actually murdered Merrick but it is an interesting tie in.

I believe this picture was from a Halloween party, inappropriate yes but I would have gone. Neiswender wrote about it autobiography.

The most offensive thing to me in this picture is the guy dressed as Steven Parent. (back row, center)

LOL! This is what i call a dark joke!
Sorry but ziggy's observation is very funny!!!

Ok, so now somebody do one of those graphs with the head outlines and the numbers and identify everyone there. Please?

Beauders, I always appreciate your comments, as they are relevant. In the case of Merrick, after the police interviewed over 70 people and 60 said they were glad he was dead, they gave-up their investigation. When I now SEE Bugliosi, I see a real "motive."

When I SAW Ronald Hughes, I used to see an honorable man trapped in a dangerous situation. Now I SEE just another FOOL, who apparently thought with his LITTLE head, instead of his big one.

That photo backs-up the theory that apparently Bugliosi ALSO thought with his LITTLE head. Back in the day people went to "parties" to get drunk and or get laid. But because Bugliosi said HE knew what each LAWYER was going to do in the case, I can also assume this was an opportunity for HIM to pump Mr. Hughes for information.

That photo (thanks Matt) also represents an importnat piece to the puzzle.
These folks are the "real" MESSENGERS to the world and THEY make NO inference to Helter Skelter, just TEX and the girls. AND "TEX" isn't even on trial at that point in time.

I'll bet that Merrick's WIFE (Joan) could really shed some light on the Merrick situation, BUT apparently SHE will NEVER talk, or even enter the public eye. SHE knows TOO much about Ronnie Howard - as did Merrick.

Robert Hendrickson said...
These folks are the "real" MESSENGERS to the world and THEY make NO inference to Helter Skelter, just TEX and the girls. AND "TEX" isn't even on trial at that point in time.

Excellent point Mr. Hendrickson. The sign above the prosecutor too. Excellent perception.

Robert,
I've just watched the part of your movie where Ronnie Howard tells viewers that, by the time they see the picture she might be dead. We y'all know that pretty soon this came to pass. Please elaborate on what the Merricks knew about her.

ziggyosterberg said:
"The guy standing next to Bugliosi looks like a young Burton Katz. Any chance that's him?"
I looked him and saw the later pics of him and he does look like him.
I don't think anyone mentioned the nooses hanging, one by the knife, and the others from the reporters' necks.
This is wacko. I wonder how long Bugliosi and Hughes were there.

I bet everyone got laid that night except bug.

The nooses & such (literal 'gallows humour') reminds me of Schreck's assertion in his first book that a 'musical comedy skit' was written by Marvin L. Part, LVH's lawyer during the trial, while the proceedings were ongoing. This was supposedly performed "by judges and attorneys for the cynical amusement of a Los Angeles Bar Association banquet at the time of the Tate/LaBianca trial." He provides he also provides a copy of the alleged script on pages 66-68. Everything Captain Satan says should of course be taken with a grain of salt, but maybe this photo adds extra Truthiness to this claim? I wouldn't be surprised if lawyers & judges have a particularly dark sense of humour; that's quite common with people involved in some of the more depressing professions (I experienced it firsthand when I worked in aged-care in a dementia facility, and on the part of a paramedic I was banging for a while).

Really interesting stuff. I do believe it. The problem with Schreck is that so much of what he says is debatable when looking at it from the evidential side of things, that when he does come up with stuff that is probably true, you are inclined to (as you rightly say) take it with a grain of salt.

If it had been solely press and photographers at the party, that would have been fine, albeit in bad taste. But when opposing attorneys turn up, it becomes questionable in terms of conflict of interest.

Bulgiosi was probably looking to see who he could pull:)

It is as Col Scott used to say over at his site: "there's no show without Punch".

Orwhat: Ronnie Howard had a money deal with two dectectives for HER testimony. Just before SHE died, she told me that she FAILED to give them THEIR percentage of the "reward" money and they were going to KILL her.

REMEMBER - she is the one who actually set the Helter Skelter "motive" in motion. BUT when Susan Atkins FIRST mentioned the murders to Ronnie, SHE never mentioned H.S.

P.S. Ronnie and Virginia G. had a Prostitution business together and were well connected to the MOB.

Ronnie was also a "top of her game" girl in the Las Vegas heydays.

I suppose the REAL lesson here is: Mr. Policeman is NOT your friend.

Robert,
Thank you. This gives me something else to think about.