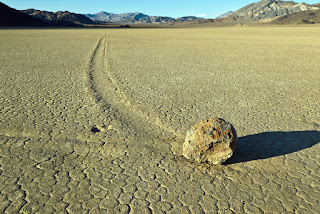 The Racetrack Playa - a barren lakebed in Death Valley National Park - is home to one of the world's natural wonders: "sailing stones" that mysteriously meander across the dried mud, leaving tracks in their wake. Since the 1940s, these rocks have fueled wonder and speculation because no one had seen them in action - until now.

A team of U.S. scientists recorded the first observation of these boulders in motion, using GPS monitors and time-lapse photography. By meticulously tracking weather data, scientists also explained how these rocks slog across the playa. What was one of the world's natural wonders now appears to be the perfect combination of rain, wind, ice and sun.

Years ago, researchers traveled to the Racetrack Playa with plenty of instruments in tow. They first installed a weather station and several time-lapse cameras around the playa. They also placed 15 GPS-embedded limestone rocks of various sizes throughout the playa. Then, it was time to wait.

"As one of the other researchers on this project said, 'Probably the most boring experiment ever,'" study co-author Jim Norris said in a video about the experiment.

However, things got interesting in November 2013. In late November, significant amounts of rain and snow created a small pond in the south end of the playa. When December came, the GPS-embedded rocks started moving, with the heaviest weighing in at 35 pounds. The rocks reached blazing speeds of 9-16 feet per minute. Most importantly, the race was caught on camera.

So what caused the rocks to drag themselves across the playa?

Getting the Green Light

Past theories attributed the rocks' movements to high winds, liquid water, or ice. But scientists discovered it's a careful balance of all these factors.

When the small pond formed in the southern portion of the playa, it cyclically froze at night and thawed under the midday sun. When the sun warmed the pond, thin layers of surface ice started breaking apart into massive floating sheets tens of meters in size. Although the ice sheets were large, they were still just a few millimeters thick.

But the freezing and thawing wasn't enough on its own. A steady, light wind of about 7-10 miles per hour was also needed, but before the ice had completely melted. This wind, timed with the midday melt, pushed massive panes of ice into the stones. When the ice accumulated behind the stones, it generated enough force to set the stones into motion. And rather than floating or rolling, the rocks bulldozed their way across the mud, leaving behind their signature tracks. Researchers published their findings Tuesday in the journal PLoS ONE.

The rocks won't move if there's too much water or ice, too much sun, or not enough wind. Everything must act in perfect harmony for the races to ensue. So, in addition to their "sailing stones" moniker, we suggest a new name for these fascinating boulders: the Goldilocks Rocks.

Great report, Matt.
Is there any evidence that Charley knew about these rocks?

I note with bemusement the scientific report makes no mention of these rocks being vessels for the souls of the damned and the condemned.

Not that I'm aware of, MHN. I came across this and debated whether to even share it on the blog. It's just an interesting tidbit about DV that we decided to use as a Sunday only post that you see from us every now and then.

I saw a postcard from Tex Watson that he had written to someone in which he described having seen Racetrack Playa. Don't remember where I saw it, but I guess the Manson Family saw it took.

Very interesting - makes me think of the story where the Family in the big school bus floated across the "impassable" part of the road into the Barker Ranch. Had I NOT encountered the same glitch in the highway to heaven/ hell myself, I would never believe it.

AND then Don Ward, a most logical sheriff, confirmed the story.

Just some crazy old souls on a roll ?

Ann, the Racetrack Playa is where the Michigan Loader was vandalized, triggering what eventually resulted in the Barker Ranch raids.

Matt,
I'm delighted that you posted this feature. I've sometimes thought that had Charlie known about the stones, he would have woven them into his myth about the underground city.
Ann,
I have a vague memory of recently reading something that made me think, at least someoe in the family knew about the stones after all. Maybe I saw the same thing you did about Tex.

Robert,
The story made me think about the floating school bus, too.

BTW, years ago we posted pics of a 1969 Michigan Loader.

I might be off the grid for a few days. Driving down to the border (Tx/Mex) to check on our hunting cabin. Tresspassers were apparently there last night, or so we were told. Damn it!

Cool I was there in about 2006 and had no idea that's where the Michigan Loader was vandalized. The stones are a very fun phenomenon. I didn't think I'd ever seen any Manson sites in Death Valley, just the more tourist sites.

To get to where the loader was burned you have to drive to the southernmost tip of the racetrack road to the Lippincott mine. Lippincott road is where it happened.

Considering how vastly remote, and devoid of people (even today) the Racetrack Playa region (slightly smaller than Rhode Island) is; how did the Family get fingered for the crime?

I've been to the access road (on motorcycle), and upon learning the Rocks were another 30 miles away on bad road, I opted to stick to the asphalt and enjoy the 111 degree breeze. Truly an unforgiving area.

SORRY to interupt, BUT I just discovered something. Just recently when Mahamend Ali complained about Trump's "Muslim" comment, Kareem Adul Jarbar ALSO complained. So I thought: "I Wonder how old HE is and Vietnam?"

BINGO - Kareem converted to the Nation of Islam in 1968 and avoided the "military Draft" like Ali. HE beccame a "black" Muslim.

NOW I'm thinking how many others did the same thing and is that where Manson got the BLACK Muslim connection Paul Watkins testified to regarding Helter Skelter. Maybe the pigeons are finally coming home to roost.

My internet says Kareem got a 4F for being too tall for the military to accommodate.

I wouldn't say Ali avoided the draft. He refused and was made an example of. Either way the government would have made use of him for propaganda purposes.

"Considering how vastly remote, and devoid of people (even today) the Racetrack Playa region (slightly smaller than Rhode Island) is; how did the Family get fingered for the crime?"

Law enforcement traced tire tracks found at the scene of the arson to a vehicle in "the Family's" possession.

So after dodging a group of GTA charges, due to an admin error, the Family heads for the desert to hang low, and be cool. Not.

In less than a month they vandalize some Federal equipment, with a Toyota stolen near where Lotsapapa was gut shot. Then menaced local miners 50 miles away from Racetrack Playa, in the remote Hall and Jail Canyons, drawing more ire.

Then abandoning a rental truck packed with drums of gasoline purchased with stolen credit cards.

While simultaneously giving an underaged girl some pot in a town with a population of 28, whose father is the Sheriff.

Hard to believe these masterminds were all in jail by mid October.