Mike Love, the despised Beach Boy, had an article written about him in the February 25, 2016 issue of Rolling Stone Magazine.  He claims in this article that Susan Atkins was the straw that broke the camel's back regarding his marriage.

Love was much married but the wife in question, Suzanne Belcher, was married to him in the right time period although a divorce was not filed for until April 1969.  That seems to be a delayed reaction to his allegation that Susan Atkins broke up his marriage by virtue of babysitting his children at Suzanne's behest while she was having an affair with his cousin Dennis.  Also, there is the little matter of Susan being ensconced in the Mendocino County jail for most of the time that the Family spent at Dennis Wilson's home.  I'm not certain of how much time Susan would have been at Dennis's house but I'm guessing it was not for long and quite early in the encampment.

Mike Love has many children by his six-pack of wives.  There was one child, a daughter Shawn Love, that he did not acknowledge for many years, who the result of an affair he had while he was married to Suzanne.  Shawn Love ended up marrying her father's cousin, Dennis Wilson. 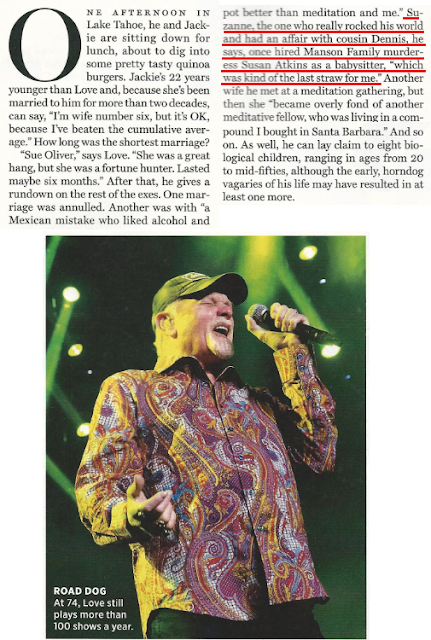 Very interesting to read....Mike Love and his wife were having marital problems and the final straw in there Divorce is him finding out that Susan Atkins had baby sited there children one time? I would not blame Susan for there divorce....! Yes, I believe that Dennis Wilson may have been with Susan before and all the other girls while they were staying in his house...Everyone with knowledge of the Family..knows that.

I do feel fascinated by the fact that Susan had baby sited Mike Love's children one time...I would love to ask him about that if I could...Thank you, Thomas G!

Love needs to STFU, get some hair plugs and retire.

I was in the front row at the Beach Boys in Duluth Minnesota back in about 1980 everyone was reaching out to touch hands with the band and Mike Love reached out and grabbed my hand...little did I know what..back then what I know now lol.had fun though.

Great POST Deb, but you should include some pics of Mike's shirts with the embroidery work on them.
It's Exactly LIKE the Manson Girl's sewing work. Almost freaky !!! He's obviously still living in the 60's, which is actually very cool.

BTW; That specific SHIRT sure looks like B.D's and the one Mark wore back then.

It's possible, because a large duffle bag of the clothes left at Mark's house finally ended up in a Salvation Army store, Mike got them there. LOL

Check out this CLASSIC shit? Matt this should be its own posts. Wikipediots are all dumb and Watson is a con man

Yeah, Matt, get on this! I didn't think that prisoners had internet access so I wonder if the "corrections" are truly from Tex or if the Wikipediots were duped.

:::I wish they all could be Charlie Manson girls:::

Blogger orwhut said...
I saw a recording once, of Mike Love telling an audience that they were going to see "how the Beach Boys, make a record", and thought he seemed arrogant but, didn't know he was dispised.

Thanks Charlie,
He didn't seem nearly as arrogant as I remembered and I was a little off on the quote too. I wonder if he introduced a song that way at more than one concert.

Lol - Mike Love is such a douche.

Am I the only person that finds it incredibly weird that a man would be driven to divorce his wife more because she had Susan Atkins babysit his kids than because she was screwing his cousin and bandmate ?
Ooh ♫♪♫ la la ♫

No you're not Grim. Mike Love is a contradiction all by himself, he would be nothing without his cousins but has worked at excluding his cousins from the Beach Boys. Not only was Susan Atkins apparently a priority in divorcing his wife but he was screwing around on the same wife at the same time and spawned a child who he very reluctantly admitted to many, many years later.

DebS said...
No you're not Grim. Mike Love is a contradiction all by himself

His last name is a contradiction.