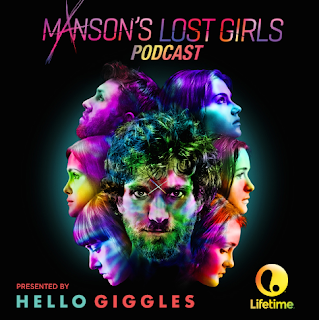 There was a recent New York Times article about various Manson/TLB related productions that are about to be shown, in production or shelved.

In a nutshell, the new season of Aquarius is set to start June 16th picking up from last season the series will begin with January 1968.

The two projects that have been shelved are a Fox series from Brett Easton Ellis and Rob Zombie and Jay Sebring biopic starring James Franco.  Seems to me that there have been other attempts for a Jay Sebring production, none of which have gotten off the ground.  I'm not sure why, Jay Sebring would be a worthy subject for a film.  His life was so much more than that of a murder victim.

The article talks a bit about some of the more recent movies that have been released writer/director J. Davis's Manson Family Vacation, Lifetime networks Manson's Lost Girls and even Katrina Longworth's podcast Charles Manson's Hollywood which Matt posted for us a while back.

Surprise, Suzanna Lo's endeavor, Manson Girls, is suffering from financial setbacks so shooting has been delayed.  How many times have we heard that!  Panamint Patty did a series of posts on one of  our readers who got burned by Suzanna Lo and her pleas for financial assistance.

There is also a film in pre-production based on Ed Sander's The Family and Karlene Faith's The Long Prison Journey of Leslie Van Houten.  Yes, both books are to figure in the same film.  I checked IMDb on this one and there is not much there except that the film is due out in 2017.

What ever the reason there is a lot going on in the way of Manson movies.  Is Hollywood gearing up for the 50th anniversary of the murders?  Is all of this necessary?  Does it glorify the convicted more than it respects the victims?  It seems like many of these productions sacrifice accuracy for sensation and that is never a good thing because it rewrites history.


“The Family,” which is scheduled to start shooting in early fall, centers on three women who were tried with Mr. Manson: Ms. Van Houten, Susan Atkins and Patricia Krenwinkel."

Did they actually buy the film rights to the Sanders book to focus a movie on those 3? LOL. What a waste of money.

Are there actually any GOOD Manson films out there? I've only seen a couple, and all of them have been mediocre. It's such an amazing far-out WILD story; why can't Hollywood do something decent with it?

Here's how I'd open MY Manson film (which would be a massive success, of course): Death Valley. Baking hot desert, just hot sand in every direction. Then... off in the distance... movement! You track in on the movement and see... A FLEET of DUNE BUGGIES, covered in naked hippies wielding high-powered firearms. Manson is perched on the lead buggy, the only clothed hippy amongst the horde, his robe-like garments making him look like Warrior-Christ. BAM, the heading appears: THE FAMILY. Cut to opening credits while The Stooges' '1969' plays (https://youtu.be/vH6iDPhUjWs).

BAM. Instant hit. 20 Oscars in the bag. Get it together, Hollywood!

I haven't seen Aquarius either actually. I think I wasn't around the blog when that first came out. What's the consensus here on it? Any good?


Clickable link for song that Vermouth posted. Some group called "The Stooges". I'm not familiar with their work. And what kind of a name is "Iggy" anyway?

That aside, I do like the description of Vermouth's Manson film. Having a killer opening sequence is like 95% of what makes film good. The Col can back me up on that (See NBK). The soundtrack accounts for the other 5%.

Of the Manson films and TV shows/movies that I've seen, the only ones that I like are Robert's two. The first one "Manson" is obviously the best. I've also heard that a 5 hour mini-series may or may not be in the works (depending on Robert's mood that day).


Check out the trailer for this movie- Martha, Marcy, May, Marlene. It stars the Olen twins younger sister, who has been in several big movies since, but this was her first breakout. This movie isn't advertised as being about Manson. It has its own side-story, but this "cult" is absolutely using the Family as its model, and is leader is the best portrayal of Charlie I have ever seen, regardless of if they are saying its supposed to be Manson or not. This is the best acted movie about the subject ever made.....

Manson Family Vacation is a very good movie too. It is not any kind of recreation or retelling the crimes, just a story about how Manson comes into the lives of a modern day California family. Funny at times, touching at others, and with a twist ending- its worth the time.

Mr. H Documentaries will hold up forever, as they are actual visual documentation of the actual scene the rest of us daydream about, The second one is literally an opportunity to sit around and watch "Home movies" of life at the ranch. Nothing will ever touch these two for pure fascination. My favorite line over the years on this blog- "Homie was there".

The rest of them I can live without. I am hopeful that the people who brought us the last OJ Series- American Crime Story- take on this case in one of their next projects. I am also hopeful that some studio with proper resources and good researchers who get to the real core story and not remake H/S will put one out someday that is better than the garbage the smaller budget projects keep delivering.

VERMOUTH: I actually SAW the 'scene' you describe, EXCEPT it was with General George Patton leading the 2nd Armored Division in tanks instead of Manson in dune buggies.

The problem with having a "leader" actually LEADING in such a powerful IMAGE, most folks don't even LIKE the idea of an EVIL one being so POWERFUL. The ONLY way you can successfully portray EVIL in such a power-full way is to make a HORROR movie. BUT there is also a 'human' side to this story and NO body seems to be able to meld the two concepts to where THEY make any sense.

AND without any sense, the typical 'programed' American MIND has NO way of connecting with the story in such a way as to satisfy the mental experience.

The ONLY reason Bugliosi's Helter Skelter is successful is because the narrative ( Prosecutor saves the world from EVIL by putting IT in prison ) plays directly to OUR universal / basic desire for PROTECTION from HARM.

George Lucus KNEW how to come as close as you can to EVIL without turning the audience OFF in Darth Vader (Death Invader) WHO just happens to be subliminally BLACK.

BUT IF the first Star Wars movie just came out TODAY, I suspect old George would have been called a "racist."

Martha, Marcy, May, Marlene- I may not have pasted that link correctly but just google the trailer its 2:30 long. You watch the trailer and tell me who this is about really lol and It is a really really good movie.

Aquarius is a terrible show. I've tried to watch it multiple times, but I swear all of the actors look alike. I can't distinguish the "good" undercover cop from the "bad" Family members, and all of the Manson girls could be clones of each other. Their personalities are bland with no individuality whatsoever.

I watched the first two episodes of Aquarius and then bailed...

As long as our movie ends with credits rolling and Sympathy for the Devil playing I'm in: "What's my name?"

There is also a film in pre-production based on Ed Sander's The Family and Karlene Faith's The Long Prison Journey of Leslie Van Houten. Yes, both books are to figure in the same film.


This sounds interesting to me

Guinevere Turner is the screenwriter, it appears, for this new movie based on The Family. She worked on American Psycho, and a movie I loved- Chasing Amy. Jay and Silent Bob lol Ben Affleck falls in love with a Lesbian much to the dismay of his jealous best friend (Jason Lee). Really funny movie. So she has done some decent stuff, and worked with some big names...

Maybe something to get excited about??

From her wiki page:

Turner and I Shot Andy Warhol director Mary Harron wrote a screenplay, which ended up being selected for the film version of Bret Easton Ellis' American Psycho. She has a brief cameo in the film, in which she delivers the in-joke, "I'm not a lesbian!" (Turner is openly lesbian[1]). There is also a line about attending Sarah Lawrence College, Turner's real-life alma mater.

Turner emerged on the scene with the film Go Fish, which she co-wrote and co-produced with her then-girlfriend, Rose Troche.[2] Turner also starred in the film, portraying a young woman named Max whose friends help her find a new girlfriend, Ely, portrayed by VS Brodie. Director Kevin Smith was a fan of the movie, particularly a scene in it wherein, in an imagined sequence, some of a character's friends chastise her for "selling out" and sleeping with a man, and used it as an inspiration for his own take on a similar theme in his own film Chasing Amy. Turner has cameos in both Chasing Amy and Smith's later film Dogma; her name is used as that of Joey Lauren Adams' character in Smith's Mallrats...

The only thing Aquarius is missing is Canned Heat recording a bluesy version of Garbage Dump and it rockets to the top of the Billboard chart. About as realistic as anything else in the show.

I can't imagine any film about or related to Manson and friends ever being accurate largely because it's a complex and difficult topic to cover. Exception may be the triumvirate of Deb, Patty & Matt as producer, director & writer, in no special order, to insure technical accuracy.

The Manson Family by Jim Van Bebber is the best one, the best documentary is Manson by Merrick and Hendrickson . Those 2 along with the original Helter Skelter movie are the only ones you need. Charles Manson Superstar is the best comedy