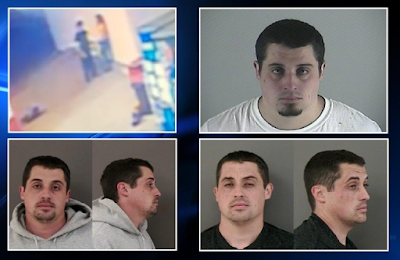 Yep ... the latest happened not too far from me. He's one Pitman's gifts to the community that keep on giving.

Looks like he's had a little fast food since our last visit.

That's some pedigree this guy has. He never had a chance.

Its just so depressing and disappointing. I deleted my own comment because I felt it was too insulting, but come on man ....

Nancy Laura Pitman was born in Springfield, Illinois on January 1, 1951. Like many in the Los Angeles area, her father was employed in the aerospace industry, working as an aeronautical engineer designing guidance systems for missiles. Growing up in Malibu, California, Nancy and her brothers were surrounded by the rich and famous...


OK. So make all the usual excuses about how someone like this could fall in with Charlie and the family, but what about all her choices after? What kind of people did she choose to surround herself with her entire life?

When your dad passed away doing 800 years and your mom was Manson's "Chief Assassin", that's a lot to live up to. Trying to steal a girl's bike - likely for a quick rock - isn't setting the bar too high for yourself given your lineage.

I'd like to be judgemental here, but it's too sad. Like Patty said to his older brother once, "Good luck, young man."

His next court date is Oct.3. Maybe Steven Kay can come out of retirement for that one.
What's disturbing to contemplate is that Michael Monfort served about 11 years for killing 2 people. I guess he wasn't close enough to the Manson legend to elicit public outrage.
And Nancy is dirt.

It has been said that when Manson was in the LA County jail and later in prison he made deals with the Aryan Brotherhood to provide women and a place to stay to the Aryan Brotherhood members who were released from incarceration. In turn they would leave him alone in prison and not try kill him or allow other prisoners to harm him. It was in essence an insurance policy. I'm not sure how accurate the claim is but it does seem as if a few of the Family women hooked up with newly released prisoners in the 70s.

Besides Michael Monfort and James Craig, both convicted of the Willett's murders and both jail escapees, Kenneth Como and Steve Bekins were also Aryan Brotherhood members.

Nancy stuck with Monfort through thick and thin. It seems to me that she might have been able to make a break from Monfort during the times that he was in jail to provide a better life and better influences for her children. But, I have never been in the position that she created for herself and there was most likely a point where she could never leave without ending up dead herself.

What the hell did Michael Monfort do in order to be sentenced to 800 years? How/why was he released in the first place after killing James AND Lauren?

Monfort committed dozens of robberies in the Sacramento area. Apparently his sentences were handed down consecutively as opposed to concurrently.

There are innumerable people who had extremely bad parents and childhoods who did not grow up to be criminals. Pitman's sons made a *choice* to be criminals. They traumatize and hurt people, and cost hefty taxpayer money to convict and incarcerate when caught. Ask me if I'm sympathetic to all that with some socio/psycho-babble excuses.

Pitman herself seemed to have straightened out, delved into the suburban and become reasonably cash flush. So what is it about her raising of her off-spring that can justify their behavior, one telling a 16 year old girl to give him her bicycle or he'll kill her ?

Austin Ann, here's the article from the Sacramento Bee about Monfort's sentencing.


A member of the "Charles Manson family" received a 878-years-to-life term in prison Friday in what is believed to be one of the longest sentences ever handed down in Sacramento County and maybe the state Michael Lee Monfort, 47, who pleaded guilty as charged to 32 armed robberies, was sentenced under the state's three-strikes law.
His prior convictions included two murders and two robberies.

The only moment Monfort changed the chiseled-stone look on his face was when Judge Michael G. Virga knocked 128 days off his sentence for time served and good behavior.

Breaking his pursed lips, the pale, clean-shaven Monfort smiled and said to the judge, "Thanks for the credits."

Previously, the longest sentence in Sacramento County was 400 years, according to several veteran attorneys.

Acting as his own attorney, Monfort surprised Morgester on Friday morning with a message that he had changed his mind about going to trial.

"He said he wanted to stop wasting the taxpayers' money," Morgester said. "He figured all it took for a life sentence was a conviction on any of his 32 counts."
More than 20 years ago, Monfort pleaded guilty to the second-degree murders of a young Marine and his wife. Lauren Willett, 19, was found shot through the head in a shallow grave under a Stockton home.

The headless body of James T. Willett, 26, was found buried in a redwood grove near Guerneville.

Morgester said police have confirmed that Monfort is a former member of the Charles Manson family. Manson and several of his cult followers are serving prison terms for the 1969 slaughter of actress Sharon Tate and others in Los Angeles.

Also arrested with Monfort in connection with Lauren Willett's 1972 murder were three women described as Manson girlfriends, among them Lynette "Squeaky" Fromme. The charge against her eventually was dropped. Several years later, however, Fromme was arrested in Sacramento for the attempted murder of President Ford.
Fromme is serving a life sentence.

Monfort and two others were arrested last year after an eight-month series of armed robberies including restaurants, yogurt shops and video stores.

Brandy Miller is serving a year in jail and Phillip Ridings is awaiting trial.
According to a police interview with Monfort's friends, Monfort used the money to feed his drug and alcohol habits.

Patty has recently become acquainted with one of the Manson family kids. Lovely woman with huge problems that all stem from her pedigree. Sad situation. However her children, the Manson family grandkids, are doing really well. So, the cycle can be broken. It's just really hard shed imagine.

There are many children who's parents have heriditary diseases. Some of the children develop them too. The lucky ones don't.

"Orrin has a long criminal record dating back 10 years"

Doesn't California have a "three strikes you're out" policy where after three convictions it's a life sentence?

All of Orrin's convictions have been in Oregon where he, his mother and brothers have lived for many years. Oregon does not have a three strikes law.

Yes we don't have a three strikes law in Oregon, but we do have a death penalty law, that we never use.

its like a death sentence to watch your children not do well in life Nancy for sure knew about the murders of the Willets most likely was a part of their murder got away with it in a court of law.She is responsible for her devastion.

That's some pedigree this guy has. He never had a chance

I find that far too absolute.
There is always a chance. There are thousands of children that grow up as the children of criminals. Many of them follow in the footsteps of the criminal parent if there's one and ditto if there's two.
But there's the other side of the coin. There are many that do not go down that road. They have the gumption, the sense and the will to want something better for their lives and they have the stones to work for that, despite the obstacles.
It really can work either way.
But by the same token, one should not be naive enough to think that having a Dad with Michael Monfort's form is not more than likely to heavily influence any children, even if Nancy kept out of trouble after her own jail escapades. Orrin may have loved his Dad rather than feel resentment towards him and wanted to slink in his paw prints. I've spent most of my adult life working with children that had those sort of beginnings and many did not succumb.
There may not always be much of a chance, but a tiny glimpse of light is better than total darkness, even if a nod is as good as a wink to a blind horse.

Awaitingmyescapewithlove said...
This comment has been removed by the author.
September 30, 2016 at 1:57 PM

Update: Orrin is still a guest of Linn County and will soon be a guest of the State of Oregon. He might have been out except he had another little problem. On October 17th he apparently got drunk (violation of his previous probation) and called the victim, Nicole Monfort (violation #2).

He pled 'no contest' to the bike charge on October 20th in exchange for a deal that is hard to read (handwritten) but appears to have been that the DA not seek an 'enhancement' of his sentence, probably due to the threat of violence and that his sentences run concurrently. The rest of the deal says '30 months on count one'.

He pled to "Coercion" and "Attempted Robbery". He could have received 5 years on count one and 1 year on count 2.

His formal sentencing on both cases (contempt and the this one) is November 4th but it looks like he will get 30 months.

Update: Orin was sentenced to 30 months in the Coffee Creek Correctional Facility for Coercion and 30 days for Attempted Robbery on November 4th.

He will be on supervised probation for 24 months after his release.

He is currently a guest of the Coffee Creek Intake Center.

Brighteyes that's good news. Best of luck to him.