On etsy.com, in case you have $250k burning a hole in your pocket: 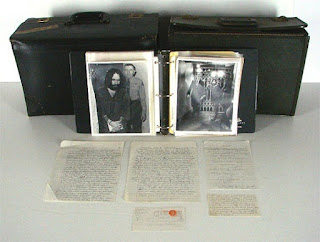 Incredible but True and especially complete and intact . The Beatles 1969 . Here you have two suitcases of lawyer that belonged formerly to Irving Kanarek the defense attorney Representative Charles Manson during what was to become known under the name of trial" Helter Skelter " one of the most important and expensive trial of the 20 th century in the United States and which has continuous cause much ink to flow. Content: A Workbook with eleven 8 ½ x 11" pages of the manuscript (certain and 2-sided with drawings), number of postcards and envelopes all written by hand by Charles Manson and addressed to his attorney Irving Kanarek , all in good state; as well as two letters and an envelope hand written a letter with squeaky comments and envelope written by Sandra Good One of the member of the Family (Manson) , a three-page document handwritten letter from Sarlotti to Kevin Bloodstone Celeste " the man who was held as Charles Manson", all in good condition; a dozen phots 8 x 10" black and white. Photographs of Charles Manson The family plans of crimes , letter of the Coroner for the murder of Donald Jonathan Shea Under the direction of Charles Manson and the other members of the family, generally in good condition; the door documents also contain procedures and documents of the Court, the statements, notes of court and press articles for most matches at the trial and to Charles Manson in prison , cutout of presses dating from 1962 to 1977 on the whole of the period covering the cause Manson as well as connections with the Judges and the Attorney General Vince Bugliosie as well as requests for appeal of multiple instances recital Charles Manson who has not had according to the written a Fair and just trial , several photos of the members of the Sect Manson called ( The Family ) . Close to 1600 parts of the whole of the cause Manson up in the Supreme Court of the United States 1977 and several documents written by hand by the Attorney Kanarek . The all in very good condition . This case was a very negative aspect with respect to the history of the Beatles and especially Sir Paul McCartney because the family Manson it was served the song ( Helter Skelter ) and many other songs of the White Album 1968 for interpreted messages prophetic said on the black rivalry\White having thus led to several murders in series so the crimes of Sharon Tate and his friends as well as the murder of the couple Labianca , Shea , Gary Hinman. Attorney Hugues ??? . There are in the two suitcase left intact . Also the peak of Guitar of Charles Manson as well as a very important industry with judicial bodies in order to allow Charles Manson to have his guitar in prison that he was obviously refused during more than 4 years. Also 1970 the Rolling Stone Magazine on the case of Charles Manson annotated by the Attorney Kanarek .The everything is left as what in each of the two suitcase in order not to changed the result in the time line of all of the procedures of this cause which marked the world in 1969-1971 . Estimated at several millions of dollars . The special packing provisions must be taken by the purchaser for the security of this incredible item !!

Thanks to William Marshall for the tip

Wow, thanks William for the heads up! I'd love to have this but not at that price. I wonder if he would drop it to $250.00, that's more my speed.

Thanks William and Matt....


Talk about Blurred lines lol Quarter of a million bucks.

There is only one reason anyone really cares about this guy and if you are willing to throw that type of cake around to be able to posses his possessions....

You have blurred the lines further than I :)

Considered it, then realized shipping wasn't included. I'm out

My math isn't very good, but I believe that if it keeps appreciating at the current rate, it will be worth more than 83 billion dollars by 2026.

Either someone is trying to pull a fast one or this is a really good investment.

Do not trust. This was sold in an old online auction (private auction house) a few years ago with the exact same pictures. All of the items from this seller are of old auctions and they have zero feedback, so I have a feeling this person is a rip-off artist. Either that or they purchased those items for resell, but I doubt that.

Do not trust. This was sold in an old online auction (private auction house) a few years ago with the exact same pictures. All of the items from this seller are of old auctions and they have zero feedback, so I have a feeling this person is a rip-off artist. Either that or they purchased those items for resell, but I doubt that.

I would request pictures from the seller. If they can't provide any, then they swiped them and they are a scam artist.

Plus the ad copy sounds like a Nigerian scamster's e-mail pitch. On the bright side, for the 250k you also get a bottle of bootleg Viagra thrown in.

The "postage extra" part cracked me up.