Bed from Cielo up for auction

The bed that was in the guest room and used by Gibby and Voytek who were housesitting while Sharon and Roman were in Europe is scheduled to be auctioned in February at Ole Hound Auction House in Social Circle, Georgia.  Apparently the bed was Altobelli's because there is a bill of sale signed by him that comes with it.  The bed was sold to a single party along with other items in 1996. 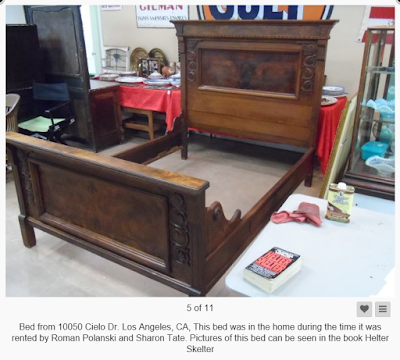 If you look through the pictures in Bug's book there is an image of it with the caption saying it is the bed that Gibby was lying on, reading, when Susan Atkins came into the room.

Check out the AUCTION listing.  The auction house's Facebook page if you have any questions.

Thanks Thomas for the heads up!

Thanks cielodrive, good color picture of the room with the bed.


A little off topic, another TMZ 'Exclusive' :

Charles Manson In 'Bad Shape' Back in Prison


"Charles Manson is back in Corcoran State Prison, and we're told he might not survive his health crisis.

TMZ broke the story ... Manson was taken to a Bakersfield hospital a week ago for significant intestinal bleeding. Doctors wanted to perform surgery, but Manson refused. Late last week he had a change of heart, but doctors determined he was so weak he might die on the operating table.

The surgeons went back and forth, planning the surgery again ... but ultimately cancelled it.

We're told there was nothing more the hospital could do, so Manson was taken back to Corcoran -- largely for security reasons.

As for the 82-year-old prisoner's condition, one source familiar with the situation said, "He's not good. His health is failing."

Here we go again... but I gotta work this week lol.

They are going to have online bidding, but the shipping is going to be astronomical on top of whatever it ends at.

Nice letter from Vince. I wonder what he wrote to Linda

But you're our best reporter!

TMZ is all about sensationalism. They don't care whether they get the story right or not. They didn't even bother to correct the false story that they put out on Saturday. They left it up all weekend, even though it was clear that Manson was back in prison when they reported that he was still in the hospital awaiting surgery. And many other news organizations picked up the false story and ran with it, just like they're doing with this one today.

No thank you on that haunted bad juju bed

Ziggy said: "Did Dreath buy them?"

I got out bid.

I don't think that's The Real Dreath. He didn't say the murder case that he's investigating.

The authorities have been notified.

Charles Manson is closing in on death’s door, a source familiar with the matter told The Post on Monday.

“I don’t think he’ll be around too much longer, but he is able to talk in his current condition,” the California Corrections Department source said, referring to the infamous cult leader’s health crisis.


just to be on topic- I do not want this bed unless Sharon is still in it :)


I know Sharon liked short sensitive dudes, but I would like to have had my chance to take my shot...

Maybe I was also right that there was nothing else they could do for him at Hospital and security is better in clink Hospice.

I think the end is still near...

Or maybe we are doing this while the tour is going on and you can do a live report :)


Check out Radar Online. Their source is a moron. Does he/she even know what the meaning of the word "stabilize" is?

Matthew Roberts was the source of their last story on Manson - he did an interview/photo shoot with them at his place last Tuesday as the story was breaking. It was published Wednesday morning.

This was published about an hour ago :


"Said the source, “It seems there isn’t much doctors could do for him,” despite reports that the 82-year-old was set to undergo intestinal surgery.

According to the insider, all that remains is to “stabilize him and wait for him to die.”

Panamint Patty said... "No thank you on that haunted bad juju bed"


If Charles Manson were to die today it might be his Karmic joke on Richard Nixon's birthday! And dying in two days as predicted by Penny Lane on 1/11 could mean Charlie is telling the world to believe 111.

Mario, if you're reading this I would like to believe the great story you told about the construction site and the Lamplighter is true. I would never write off your claim out of hand. I didn't mean to imply that you were supposed to entertain me, but simply that stories do entertain me, whether they are true or not. There is so much myth which builds up around famous people in history along with the true stories. I can say one thing I love on this site is when a new story about the Manson 'family' comes out of the woodwork as I like to get slices of life about these people that I won't find in mainstream reporting and books.

Penny Lane, I hope if you have any more Manson dreams they are not creepy! I had a Manson dream not long ago but I can't remember any details, but I probably had too much chocolate and that gives me intense dreams. :\

You guys are to funny with that nut job.

Excuse me. "No Bama"

You need 9 dashes inbetween your name and case, or it won't legally work


"A bed frame from Sharon Tate's home -- where one of Charles Manson's famous victims slept -- is up for auction ... if you're into that sorta thing.

The now almost 50-year-old wooden frame belonged to Abigail Folger ... the coffee heiress who lived with Tate. She was lying in the bed moments before she was chased out of the room at knifepoint by one of Manson's followers, and stabbed 28 times.

Crime scene pics of the bed are featured in the book, 'Helter Skelter' -- and Ole Hound Auction House expects it to fetch at least $10k. An Ole Hound spokesperson says there's still blood spatter on the footboard, which can be seen under black light.

And there's this morbid thought -- we're told the frame's price could jump up significantly if Manson dies before February 10 ... the day it hits the auction block."

TMZ updated the bed story and removed the part about the blood on footboard.

Where are the posters that are close to Manson? I'm sure they can clarify Charlie's health situation.

Does anybody remember the racehorse Barbaros? That's the last time I remember reading so many updates about a potential death. In the last days of that horse farted it was scrolling on TV screens.

Charlie sure can draw attention with the very best of them

StillGrooving said...
Where are the posters that are close to Manson? I'm sure they can clarify Charlie's health situation.
---------------

Charlie phoned Ben Gurecki the day after he got back from the hospital in Bakersfield. Ben put up a YouTube of the conversation yesterday. Charlie doesn't sound half bad, sounds as strong as an 82 year old man who just went through a health crisis can sound.

Maybe someone can make this into a direct link, I'm a tech-tard.

Radar online is reporting he is critical and on his deathbed someone told me but I'm in office today doing training meetings so I can't check or copy paste.

I'm not a sicko (really I'm not), but I think owning that bed would be cool for a reasonable price. Too bad the stuffed rabbit doesn't come with it.

The auction house is supposed to text me a shipping quote. However, it's going to be astronomical.