For some reason the video won't embed correctly, but you can view on Huffington Post's site.

Convicted mass murderer Charles Manson has a new mug shot, thanks to officials at Corcoran State Prison in Central California.

Manson is serving nine life sentences at the facility. On Monday, prison officials took a new photograph for security reasons, just in case the 82-year-old manages to escape.

Although the swastika facial tattoo seems especially prominent in the photo, he’s had it for more than 30 years.

TMZ suspects his wrinkles may be accentuating it. 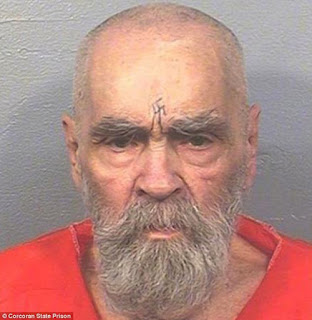 Manson’s last mug shot was made in January, when he was taken to a hospital in Bakersfield for an undisclosed medical issue, according to Reuters.

Manson became infamous in the late 1960s as the leader of a murderous group of mostly female runaways and outcasts known as the Manson Family.

Prosecutors said the murders were part of a plan to incite a race war.

Manson was initially sentenced to death in 1971, but his sentence was converted to life in prison after a California Supreme Court ruling that declared the state’s death penalty law unconstitutional.

Reuters contributed to this report.

My guess is that Charlie uses an ink pen to touch up his swastika on picture day.

SF Gate has a series of 38 pictures that accompanies their article about the new mug shot. A couple are of the jury members quarters that I hadn't seen. Images 24 and 25. Two police officers would go through the daily newspaper cutting out articles that they didn't want the jury to read.


There is not a single picture of Stabby Tex in the lot.

The eyes look tired, but the facial expression is as defiant as ever

Susanatkinsgonorhhea said...
This comment has been removed by the author.
August 20, 2017 at 3:05 PM

Good genetics plus food and medical on the taxpayer dime. My first thought is what DebS said -- looks like he added some color to his swastika scar. I wonder if he ever had the thought, "maybe I f*cked up ! ".

Susanatkinsgonorhhea said...
This comment has been removed by a blog administrator.
August 20, 2017 at 11:27 PM

The swaz isn't a scar, it's a tattoo. And he doesn't need to touch it up. It's really distinct.

he looks good for getting up at 4am to take the photo ...

He looks great for 83

He was always pretty photogenic and pretty good looking but I have to say, he looks better at 82 than any of his co~conspirators do in their 60s and 70s, at least in the face.

I suspect that thought may have crossed his mind many a time from the moment he discovered Lotsapoppa was actually alive. I also suspect that in common with most of us, his powers of self deceit are such that there came a point when he could justify his way out of such thoughts.


Mario has a new mugshot too.

Actually, that was a spur of the moment thing. I even thought I combed my hair back a little.
I gotta look good for the TV camera's for what might be legally happening soon.

Maybe he could try to smile next time? Jheesh

Patty has seen pics of him smiling

I want to thank you all for what you so here. The rich discussions and information are beyond interesting to a long-time Manson family reader and researcher like me.

I've been researching the different "authors" (quotes intentional lol) of the many, many books on the subject. I suspect that this in-depth look might bring up some new information vis a vis associations, purpose in writing, et cetera.

Anyway, I just want to introduce myself. I've been reading this blog (including comments ;-)) for about a week, and I feel like I've found my people.

* What you DO here lol

I feel like he looks different in pics he knew were being taken (even prior to the mug shots). My belief is he thinks about who is going to see the picture (who his audience is, so to speak) and goes from there.

The realist pics of CM, imho, are unstaged.

Welcome to the blog, Katie!

If anybody has names of authors of any obscure Manson works they'd like to send my way, I wouldn't say no ...
kloud1026 at yahoo

Katie I'd start with:

Desert Shadows: A True Story of the Charles Manson Family in Death Valley by Bob Murphy

Off the subject, but Bobby Beausoleil is listed as being in the medical facility at Vacaville. Anyone know why?

Katie it's never been clear to me when an inmate is at "Vacaville" whether they are actually being held in the medical facility or if they are at California State Prison, Solano.

It could also be that older prisoners are transferred there if they are not in max security because by nature they need more medical care. Perhaps someone with more knowledge will chime in.