I always hoped little Dianne Lake (Snake) would come out with a book, since she was one of the earliest members of the "The Family" and was pretty much around Manson constantly. He never sent her off on little contingent groups, like he did the others. He also beat her more than any of the others too, which is incredibly disturbing. Dianne's book should be pretty insightful, and I really look forward to reading it. The book will be officially released October 24, 2017, but Amazon is taking pre-orders already at this time. What do our readers think? Will it be just a rehash of stuff we've already known, or will there be new stuff to ponder over? Hmmmm? 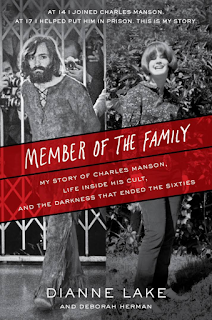 More like "i helped put Tex in prison" lol

Susanatkinsgonorhhea said...
This comment has been removed by a blog administrator.
August 5, 2017 at 12:36 AM

The marketing of it (i.e. the blurb on amazon) seems about what you’d expect from a mainstream publisher like William Morrow & whatever ghost-writer they’ve teamed her up with. Deborah Herman apparently… dunno if it’s this particular Deborah Herman… https://deborah-herman.com/writer-entrepreneur/

I kinda hope that whatever insights Ms Lake wants to share haven’t been too mangled in the process. In the one interview I’ve heard with her, she came across as intelligent & self-aware and didn’t seem too focused on the usual hypnotic cult leader rave, displaying instead a much more nuanced view of it all. Good luck to her with it. I’d much rather see her turn a buck off the story than the Jeff Guinns of this world. And (as AustinAnn74 said) it should be pretty insightful. I’ve ordered my copy.

I want to hear her side of her connection with Little Paul. If memory serves, she was his favorite.

Without Dianne Lake there was no corroboration of Leslie's involvement. It's ironic that Leslie saw Dianne as the epitome of what the perfect woman, Family style, was.

What do our readers think? Will it be just a rehash of stuff we've already known, or will there be new stuff to ponder over?

I suspect it will be a combination of both. The one good thing perhaps on the rehash side could be that because, as brownrice mentioned, Dianne appears to have had a nuanced view of things {she was incredibly magnanimous towards her Dad, for example}, those rehashes may be infused with new meaning and insight.
I know memory can be unreliable, especially after almost 50 years, but I think there can be something intensely valuable about the recollections of someone who has had plenty of time to reflect and describe what happened back then but through the eyes of today.

I don't like the bit on the front cover that says "the darkness that ended the 60s."

Grim said, " I don't like the bit on the front cover that says "the darkness that ended the 60s."

Agree with that, and for me provides an immediate sense of sensationalism so a questioning of sincerity. But hopefully it's only a publisher's advertising ignorance and ruse.

Robert would have LOVED this: Don't Talk to Cops

Matt, that is rule #1. I even tell it to potential witness clients, meaning those who call me up and say 'hey, the of say I may be a witness'. And actually my 'rule' is talk to no one.

Especially if they can convey the depth of feeling they had at the time.

for me provides an immediate sense of sensationalism so a questioning of sincerity. But hopefully it's only a publisher's advertising ignorance and ruse

I give the publisher the benefit of the doubt on that I guess. They'll want to sell the book to as wide an audience as possible.
But I still don't like it !

I'm always hopeful to learn something new from those who were on the front lines. The encouraging aspect is that Dianne, unlike Susan or Tex, has no criminal guilt to play hide-and-seek with, so honesty can flow openly if she wants it to. I guess apart from Paul Watkins' book, this will only be the second from a non-convicted Family member. I'll make sure to read it.

With all of these nobodies writing books it makes me wonder why or how Garretson never wrote a book or at least put his name and story behind it, it would have been way more interesting than these people who were 12 fucking years old and fed the horses at Spahn for 3 and a half weeks and suddenly know all about how the story went down

Dianne Lake, a nobody ?
Tell that to Leslie !

I would like to hear the taped interviews she had. If you look at the picture Cielo Drive uses for the background of their audio archives, you can see a number of tapes labeled "Dianne Bluestein".

Snake was harassed by Nellie the Molester back in the day. If you track her current movements like the fangirls on here do you will see that she found herself and all that shit. So comments about how she would move her hot little body all over Paul's knob are probably not in the book

Leslie doesnt even know who she is

Lol "Nellie the Molester", i wonder if Bill carried around one of those portable massage tables with him to hotels

Susanatkinsgonorhhea said...
This comment has been removed by the author.
August 7, 2017 at 7:53 PM

No he used a chaise lounge at a sleazy motel

Leslie doesnt even know who she is

Confirm for me whether that's a serious comment or a gag.

That's the right place for him.

Send Leslie a letter to "chowchilla" or whatever shithole shes wasting away in and ask her if she remembers her, if she says yes ill treat you to a 36 oz porterhouse at Mortons of Chicage when youre in the states

Send Leslie a letter to "chowchilla" or whatever shithole shes wasting away in and ask her if she remembers her, if she says yes ill treat you to a 36 oz porterhouse at Mortons of Chicage when youre in the states

I like mine well done and don't wait till I'm in the States, just forward the money via Paypal, I'll get the equivalent at Gaucho's in Hampstead. Yes Siree, I can taste that Argentinian monster now....
From Leslie's 2013 parole hearing:
PRESIDING COMMISSIONER FERGUSON: Do you recall telling Diane Lake that the person you had stabbed was already dead and the more you did it, the more fun it was?
INMATE VAN HOUTEN: Yes, I do.
PRESIDING COMMISSIONER FERGUSON: And was it more fun the more times you stabbed her?
INMATE VAN HOUTEN: No.
PRESIDING COMMISSIONER FERGUSON: Why did you say that then?
INMATE VAN HOUTEN: Because at the ranch, everything was supposed to be okay and fun. And I felt that I had not carried out what was expected of me in the house in as strong of a manner as I should have. And I was trying to impress her.

And a little later in the same hearing:

Lol that was 4 years ago

Susanatkinsgonorhhea said...
This comment has been removed by the author.
August 8, 2017 at 3:47 PM

Lol that was 4 years ago

So ? Leslie's not senile or showing any signs of dementia yet. Or do you have problems remembering who you knew 4 years back ?

Jokes aside though, it says something about the part Dianne played in Leslie's life that 44 years on, she remembered how much she wanted to impress her and why. It's significant because Leslie's memory was connected to Dianne's being and in particular why she used the word 'fun' to describe stabbing to Dianne. It was part of the same conversation that ultimately enabled the prosecution to have independent corroboration of Leslie's involvement in the LaBianca murders which led to her conviction and all the trouble she's had subsequently. No Dianne Lake, no independent means to tie Leslie to Waverley.
Oh, I think she remembers Dianne Lake.....
And VD Sue owes me a steak !

14 days to receive my kindle copy, can't wait to learn what she has to tell us...