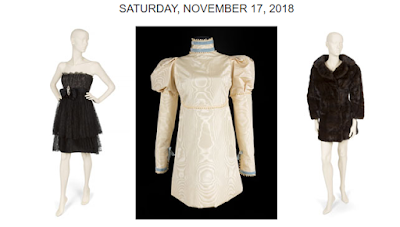 A bit of a stir was created over our POST about the auctioning off of Sharon Tate's clothing due to take place this fall in Los Angeles.

A blog reader with a much better memory than ours sent a link to a 2011 post on another blog telling about a burglary that had occurred at Debra Tate's home.  Among the items stolen was Sharon's wedding dress and a mink coat, both are up for auction. 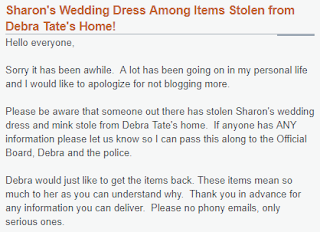 Additionally the reader with the great memory sent a link to Colonel Scott's blog who in typical Col fashion wrote about the burglary and posted a video interview Debra did with an LA Fox television station about the stolen items.  Unfortunately the link to the video is outdated but the Col's post predated the other link by a week.  The portion of the Fox article that the Col posted says that Debra was the executor of Sharon's estate, as the Col said this is not true. See the below documents.


As a bit of follow up on our previous blog post a reader asked "Wouldn't Roman have been the beneficiary of Sharon's estate, not Doris and Paul?" 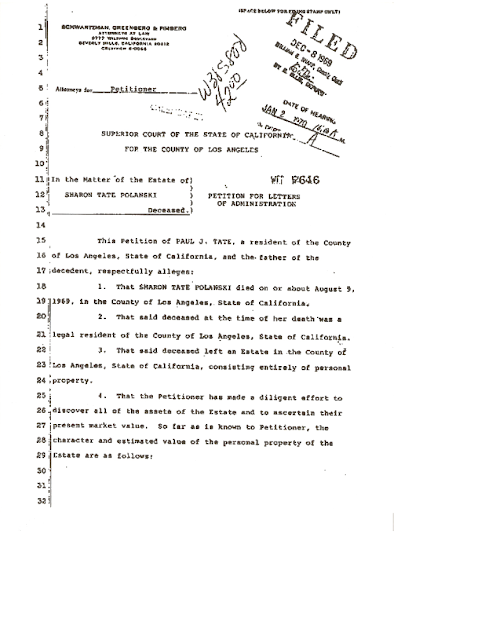 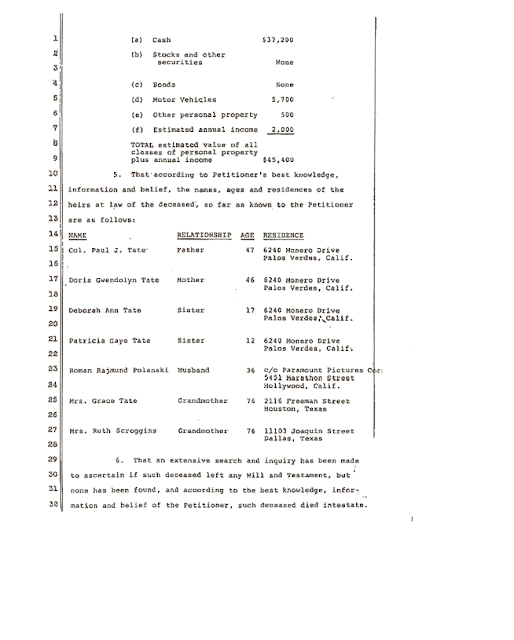 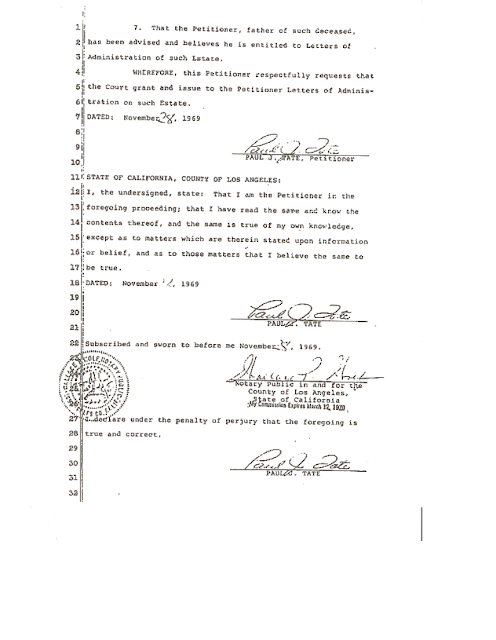 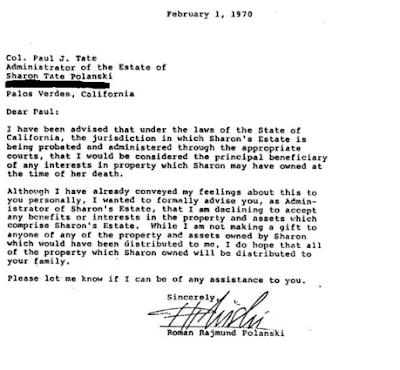 So, this dress was reported stolen by DT, but now she's selling it?

Interesting. How's she going to explain things? I'm not sure if I've ever seen that photo of Sharon before on the Sensational blog. It's wonderful.

Whoever "stole" it must have been kind enough to return it. Debra is attention seeking.

Just saw an article about Debra now supporting Tarrantino's movie. Just as I have thought all along, she just wanted to be included...that is all it takes with Debra, just a little attention.

Response: No. In fact, his request was just the opposite. I was instructed by PJ to pack up only one trunk of Sharon’s belongings for Debra Tate to have. PJ further stated that Debbie was not to enter the house to get the trunk, but rather it would be placed at the end of the driveway for her to retrieve, which we complied with.

Hi, Col. Why is Ms. Statman your 'former' friend?

O.T.
I don't know whether this is a sale price or not but, I just down loaded the Kindle edition of Dianne Lake's book, Member of the Family... for just under ten dollars.

Am I the only one who is amazed at how Shady both parties of this incident really are? roman is enough, with jays narcotics, rosemary and leno' s hustle too, Debra (jesus) no wonder the truth is so God damn far out there. Wait til that q.t. movie comes out everything Manson is gonna skyrocket in popularity, esp with the big 50, which pisses me off because I'm one of the few Millennials that were into this years before Charlie's career gets "revamped" so to speak.

What exactly is Rosemary’s hustle?

Toby King- are you okay? did you up your dose? Let us know we care. Hug.

starship- "Nothing lasts forever but the earth and sky"

vis the dress, there is a long enough lead time we can make sure that the right people are aware of the sale of stolen goods

I know youve read her backround in the homicide reports, she spent most of her adult life scamming men, not making excuses for her murder but the truth is the truth

You are correct, I’ve read her background. Not sure if I find it all that scandalous though

Lol what do you consider scandalous? To me her life sounds like an episode of the Rockford Files, only thing missing is the dead husband and insurance payout

Without a dead husband and insurance payout, your Rockford Files episode is going to be pretty mundane.

What in particular do you think was most scandalous about her?

"Nothing lasts forever but the earth and sky"

What in particular do you think was most scandalous about her?

She's kind of in the same bracket as Steven Parent, someone who, because they weren't a celebrity, had to have their life reconstructed from speculation and past actions rather than demonstrable fact. The LaBianca police reports don't really tell us anything concrete. We get much supposition from people that knew her, such as her being suspected of lesbian affairs {which those reportedly involved in denied and the police couldn't prove otherwise} but apart from her seeing Charles LaBerge while she was married to Frank Struthers and while she dated Henry Martin, little that one might call shady. And all of that had ended at least 10 years before she was murdered.
The 50s seem quite racy if Rosemary {who lived with Henry Martin as his wife even though she wasn't and whom she eventually jilted} and Charles LaBerge {who married Rosemary in Mexico while he was still married to someone else in America} are anything to go by. She had "been there, done that" before Charles Manson and the love generation even got started. While generally in the 50s it might have been viewed as scandalous by 60s standards, she was a pioneer !

You guys seem so happy talking about who knows what that you may need plastic surgery to get the smiles off your faces.

I am not happy. Grim breathing my air bums me out and brings me down

Id be interested to hear more on Folger and Frykowskis cross country trek in 68, specifically their stopover in Irving, Texas, very close to Watsons hometown, probably nothing to it but it seems like a strange place for a stopover

I love Point of know return, both the song and the album. Masque however, is my top dog when it comes to them. By the hair of a bald man.

I am not happy. Grim breathing my air bums me out and brings me down

In the aftermath of the Paris climate accord mate, you can keep your air.😉 👍

Am I the only one who is amazed at how Shady both parties of this incident really are?

They were human.
Sometimes, we can fall into this thing of 'every murder victim is almost a celestial being, flawless, incapable of anything negative.' But that's not real life.
If any one of us were to be killed right now and the Police looked into our lives, I suspect they would find something that could cause their eyebrows to raise and that someone, somewhere, could spin into negativity and/or take out of context. Also, they were all relatively young and their lives were in full flow. They were where they were at at that specific point in time. Who is to say in which direction any of them would have moved the following week ?

You could immortalize Grim's likeness/avatar as a "nightmare vision" in an Easter egg in a future legacy edition of NBK...

Just sayin...or, maybe as an extra in the next Transformers installment

(As Grim's "agent" please submit your royalty payments to myself...)

In regards to the shadiness of both parties, only one side was shady. The victims in this and many crimes, had their lives put on public display for all to see and judge. It wasn’t their choosing. They didn’t advertise their flaws, weaknesses, or vulnerabilities. The shady people in this situation, took that from the victims. Took their privacy. Exposed all of their secrets. The shady people CHOSE to be shady, chose to be with Charlie, chose to commit murder, chose to hideout in the desert, etc.

Once a families dirty little secrets are out, they’re out. You can’t put Leno’s debt and gambling issues back into the genies bottle. Voytek’s drug habits are now well known. He’ll live in eternity being a druggie because of the crimes committed against him. He’s a hero in my brain. Fought like a champ and wish he’d have knocked those girls out and shoved that pistol up Tex’s ass. Scumbags.

Very well said Astrocreep. The victims never signed up for this legacy. Voytek would probably have not been a druggie down the road. Problem was his road was taken away from him and so now he will always be a druggie.

Astrocreep, thank you for posting that!

BabyPeggy said...
Am I the only person that can see that the dress from the auction and the dress she wore on her wedding day ar different intwo respects.