A couple of intrepid souls sneaked into where the filming of Spahn Ranch will be for Tarantino's Once Upon A Time In Hollywood.  From the looks of things they have done a pretty good job of recreating the ranch.


They are building the sets at Corriganville Park in Simi Valley.  Corriganville was once a movie ranch, like Spahn and Iverson Ranches.  It closed in 1965 when Bob Hope purchased it.  The project Hope planned did not take off and he abandoned it a year later.  Corriganville is now a regional park. 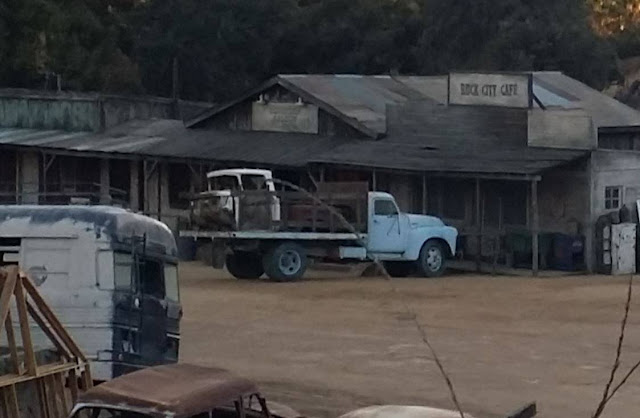 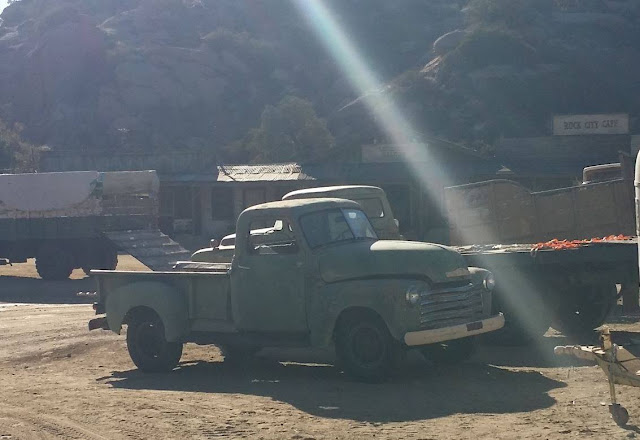 A couple of the vehicles they have gotten for the filming 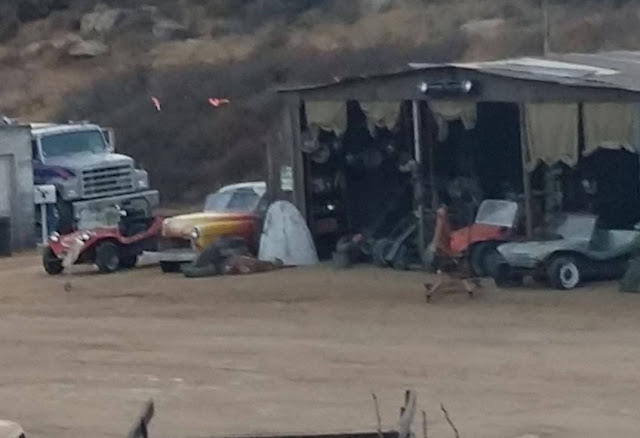 What would the film be without Dune Buggies? 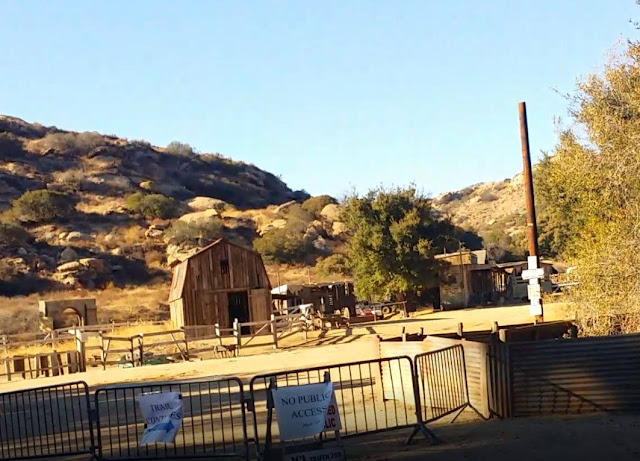 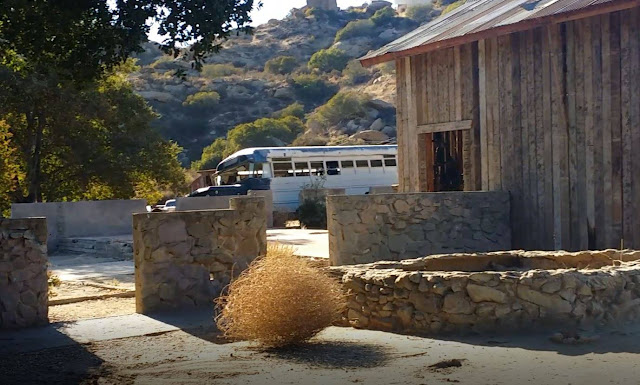 An old school bus was acquired 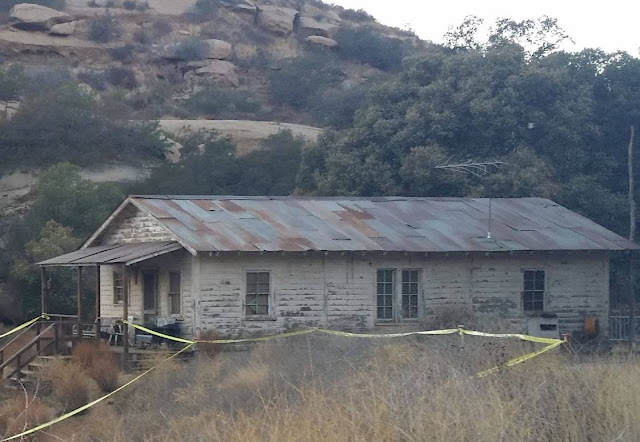 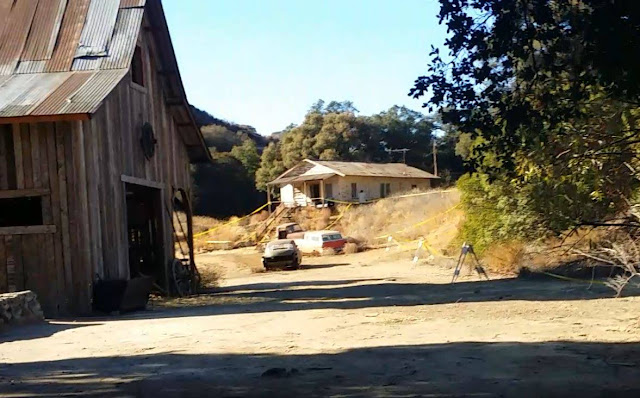 A barn, couple of old cars and George's house in the distance 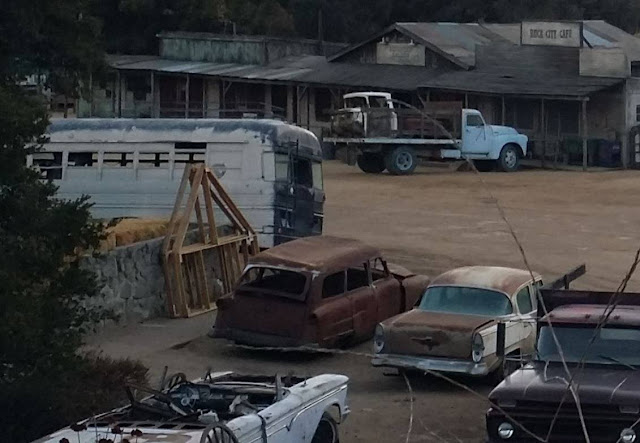 The boardwalk, old vehicles and the bus 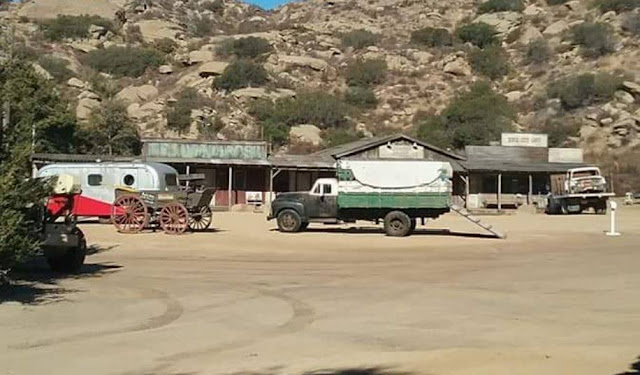 Labels: film set, Once Upon A Time In Hollywood

The Boardwalk is very realistic. While I don't have much hope that this film will show anything
new, or shed in a non Bugliosi light, I will probably see it now, because this has me a
little intrigued. 😜

So cool! I tried to get in but was sent to the back of the park.

I may be wrong but it's my understanding Tarantino's new movie doesn't focus on the MF -- they are just a component thereof. So I was surprised at what seems like quite a bit of effort to build a Spahn set and maybe even a Myers Ranch set too. But for those of you hoping for a literal serious interpretation ... well ... that's not really Tarantino's style (yet) although we can only hope. But he usually uses graphic violence and dark humor bundled together.

Meanwhile I don't recall ever seeing any dune buggies front and center at Spahn. I always thought they were prepared behind all the buildings and huts and shipped off to the desert but then I know very little about how the dune buggy biz went down.

Janell Bauer said;
While I don't have much hope that this film will show anything
new, or shed in a non Bugliosi light.

From what I have read, this movie is not about showing anything new about the MF. This is a fictional story with the Manson murders as a component. I am very excited to see it.

From the photo, it doesn't look front and center to me. If you look at the other photos of the front of the ranch you do not see the dune buggys at all. I bet they are located in the back.

We have a friend who went a little too far this week so now security has been beefed up.

I don't think that the set was created to be completely faithful to the actual placement of the buildings but rather they are just building each location where they plan to film and will let editing take care of making it look like the real deal.

They worked on the dune buggies in back of the boardwalk.

It's a shame they are going to tear it all down after filming. I wish we could rent the place out for one night and have a Family theme party, with everybody coming as their favorite Family member. I got dibs on Donkey Dan.

The Col get to be Charlie.

I saw a comment by Panamint Patty!
Hi Patty.
Whut


Dern in for Reynolds. I'd think ole Bruce may have rubbed elbows with the MF and/or filmed at Spahn Ranch back in the day too...

I meant to say Thanks for the info, Matthew!

I agree with jerseydevil completely. Not a stinker in the bunch. Did the col and QT bury the hatchet at the MANSON screening at QTs theater?

So what exactly is the premise of this movie? Tarantino has corralled Debra Tate into endorsing the film which supposedly won't portray a bloodbath of any sort. It just seems too elite to me. The cast is all wrong (aside from Margot Robbie - she's a beaut) and Austin Butler as Watson is a tragedy in and of itself. I'm a pessimist , admittedly. But I do give credit to the recreation here. Impressive.

By the way , that's me ^ I forgot to sign in before commenting. New here.

Welcome Nomad! I think the movie can best be described as historical fiction, kind of like Fincher's Zodiac movie. Don't expect any revelations but do plan to be entertained.

I've been to the set 5 times now. The feeling u get when you're there....it's almost like time travel. Unfortunately I have a gut feeling that the set will be the best part of QT romp in Mansonland

So, is Dakota Fanning Sexy Sadie?

Was watching a documentary about the Stooges the other night, and Iggy briefly mentions living at the Tropicana while recording in L.A. and Ed Sanders living in the room next door.

I believe Ron Asheton has commented on the dark post TLB vibe at that time. Which was also tbe 1st time that Iggy tried cocaine.

That timeline is spooky to me. I can't quite recall the exact time, but not long after that: was at their concert in a basketball stadium (no seating). Iggy came offstage, wearing nothing but a crazy G-string, & danced obscenely over this very young girl, maybe 13-14 (I was 12, & got in) who was obviously tripping. She curled into a fetal position, trying to get away... it was pretty horrible to see. Never quite forgiven him for that.

But maybe he was in a Bad Place too.

Farmington High School in Farmington, Michigan in Dec '70 he did a similar thing...

And, of course, broadcast on ABC - with the famous "walking on hands" shot

That is pretty amazing. Farmington HS is a bit like Beverley Hills HS.

And that makes it t more bizarre.

One of their only appearances as a 5-piece with Williamson AND Asheton in guitar. Jimmy Recca on bass. Recca said these shows were an insanely intense period for them.
Crazy seeing some of the bands that played high schools back then - in '67 on the East Coast leg of their 1st US tour - The Who did a few high schools. Cream. Velvet Underground. More too.

Hey! Looooooong time lurker, first time poster. I love all the theories, the personalities, the essays, everything. As someone who has been into this case for more than half my life, this movie cannot come soon enough for me. Tarantino is a master at blending reality and fantasy, so I'm looking forward to seeing what he does with it, and he is a self-proclaimed Manson Expert as well. I secretly would love an alternate reality ala Inglourious Basterds where Helter Skelter actually goes down, ha! And I wonder if he'll include Bobby in the story (which he absolutely should). I should let it be known that I in no way support the HS theory for the crimes (albeit Bug did a fine job of snowballing the jury and the press, even until the day he died. So glad I dont have to see his face on the specials anymore; although Stephen Kay gets on my nerves, too). Anyway, thanks for all of your hard work, everyone! I get so much new info and theories from here and I am psyched to see this replication of Spahn Ranch!

Welcome Ouisch! Thank you for the kudos!

@tinkse7en - I had meant to ask you where you saw them ? What city/state? I may be able to gather some intel from Recca or Williamson - if you are at all interested. Possibly a dark episode you'd rather not have me dig up though. Lemme know.
Cheers

This actually looks amazing! So realistic