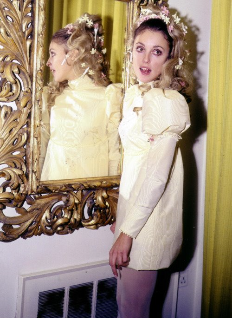 No need to channel Sharon. Would've been easier to go to Dave Oman's and contact her spirit since she's living there now.

I didn't realize that 'mediums' can contact a spirit even after they've started living a new life on earth. Hmmmmm. Pretty entertaining.

Pretty skeptical but, thanks for all your effort in transcribing this

Wattalodeacrapola lol. How's She know every inner thought of Charlie's? And did they say susan was asking for mercy during the stabbings? That's not the way i heard it....

More proof that mediums are BS

you can listen to the interview on the youtube page called channeling erik. there is an interview with charles manson as well.

Not buying this one but interesting. Strange that Sharon would come back to read the papers and visit Charlie. How would she know that the guy that showed up on her porch was the guy that orchestrated her murder when he was not even there? This borders on exploitation and sensationalism

This is from a page called "channeling Erik." if you read the interview with CHarles Manson, there are so many factual errors. It's sad, but it seems the mother is either convinced she is speaking with her deceased son, or she has found a way to profit from it.

I'm always skeptical of things like this and at the same time, I know there are things going on beyond of our understanding.
I was fascinated with this case as a teenager, then again in my mid-twenties and then put it aside for many years until last spring when I started reading articles about Quentin Tarantino's new movie. Somehow I found your site and read obsessively for months. (Amazing info on this site and I thank all of you who put so much time into researching and writing posts.)

In May, I got a part time job at a store in our town. The first day working there, a woman I was working with brought up "Rosie Tate" out of the blue. I was shocked. She's not interested in this case and brought it up bc of someone else she knew. She just mentioned it in conversation. I had not brought the subject up at all. I've learned not to! People think it's weird. Anyway, from there, one day the owner of the store was talking to me about California and started talking enthusiastically about Death Valley. Talking so enthusiastically, saying over and over, "You HAVE TO GO THERE!" that I was again shocked. Why all this focus on Death Valley? Where is this all coming from?

Another day I was working at the store, reading your site and someone in a comment thread mentioned Squeaky in an alternate universe "maybe working at a Sawmill." Just a hypothetical, but what got me was that I was working on a sawmill account, and had been writing copy all that week about sawmills when I read that comment. Stopped me in my tracks. The sawmill comment was from a few years back. So, I'm writing about sawmills and I'm reading an old comment about Squeaky and sawmills. (Sawmills had never before been a part of my life.)

Another day, a neighbor came into the store to visit me while I was working and started complaining about traffic. He goes, "You know that guy from the '60s? Charles Manson? It's like Helter Skelter out there!"

I'm thinking, Man, I've opened up some sort of portal somehow. One time, maybe two, is a coincidence but all of these things happening one after another is just... strange. And a little bit creepy. oooo-eee-oooo.

I've had a few other coincidences with commenters here and music. One was, a commenter here mentioned a song in an old comment thread that I hadn't heard in 20+ years. So I went to youtube to listen and then it was stuck in my head all day and into the evening. That night a Facebook friend posted it. Um. Ok. There are others but I won't bore you with the the details. It's just all this stuff is tough to ignore.

I spoke to a spiritual friend who said I was "bumping up against a different realm, a different reality." A reality that is "wobbly" and is allowing information through. Some things she said sort of sounded like Charlie-speak.

So, I always remain skeptical of things like this channeler and at the same time I try to stay open to all possibilities. And send prayers of love and light for healing, too. We're all connected.

I find this extremely disrespectful and along the same lines as that book Restless Souls with make believe conversations & thoughts attributed to Sharon Tate. Let Sharon and the other victims of the Manson Family rest. They were real living, breathing human beings, not a characters for a movie or book.

Long way to the point of the story- she described the aftermath of the trial- OJ and his legal team high fiving, slapping each other on the back, then they all rolled over to OJ’s Rockingham mansion for a party- at which 40 cases of champagne were delivered. It was a real throw down.

Meanwhile, the Goldman’s and the Brown’s were left devastated- the prosecution and the family’s wept together.

She went on to discuss how the OJ trial had become such a part of Americana. Jay Leno had skits with dancing Judge Ito and even SNL jumped on the comedic bandwagon.... and many other examples. So much so, that it was un-escapable.

Your comment reminds me of that example and also how the Manson Family clowns caused this same ripple effect for the families and friends of those murdered in 1969. All the books, the arguing over his estate, movies, you name it. We take that for granted when we discuss this case and the characters involved.

Interesting to some I'm sure.
To me it's little more than "mental-masturbation."

Unknown, your comment is callous and pretty much demonstrates what an absolute roach shell you are. Colorful characters to give sorrow to? Unbelievably cruel......

To Astro and Ann, right on as always. I appreciate your take very much. Thank you. Bob

Unknown, those are some of the most idiotic comments I've ever read anywhere, and then some. Narrow-minded to the extreme.

I love you are you okay friend?

Polanski has been accused by a French actress, that he violently raping her in 1975 at his Swiss Chalet. She was eighteen at the time. The man is a menace.

What utter claptrap. I can’t stand these people who claim they speak to the dead. They’re just con artists.

So stupid! If anybody believes this "conversation" I have a bridge to sell them

Well, yes...those that claim they hear the dead. Especially when they involve themselves in criminal cases of missing persons. Just wicked.

I don't see the point. It's not like the Tate family asked for it. It's egocentric, disrespectful and morbid.

Agree sounds like a bunch of crap and I'm a believer