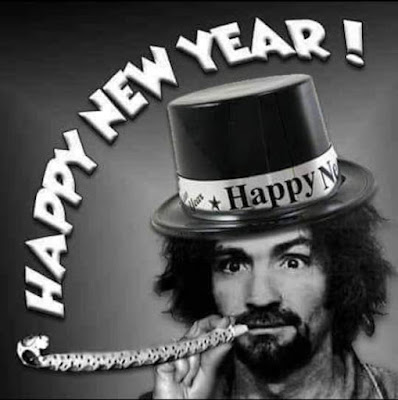 I just finished watching the Epix six hour documentary and might do a LAST WORD review of it. Did anyone watch this? Did anyone realize it was BUG family approved? Who was this for?

I also watched Charlie Says and don't know how to review it. It did do one thing that shocked me- every time a Family girl got naked I wanted her to get dressed again- which is likely how it probably was irl except for LVH and Nancy

In the New Year I wish us all a better time, a time to Thrive and a Time to grow. A time with normalcy in government and a time for happiness while we study multiple murders.


I also apologize again to Matt for things I said that offended him years ago. He can still refuse the apology but I mean it. And I apologize to Grim. I realize you might have the best command of case minutiae of anyone here and I mocked you because you had a lame Avatar pic. Childish of me.

To quote THE WHO


"Got a feeling '21 is going to be a good year,
Especially if you and me see it in together"

Seriously though, happy new year, one and all.

Meanwhile how do you PAY (zero doubt) Catherine Share for a six hour documentary, let her boast about intimidating BUG at the BH Hotel and NEVER mention that she fired guns at police officers? Like she is just a nice sweet Grandma or something. She served 5 YEARS in prison for trying to kill police. I mean wtf Epix?

These people deserved one another every single one of them.

Happy New Year to everyone here. Thanks for keeping this blog going.

Since I've been posting the YouTube links for people outside of the US...I'm up for your review.

I have been in a self imposed post retirement lockdown for well, it seems like a year now and have spent big chunks of it reading this blog in entirety from start to finish. I figured it was winter, a pandemic was swirling outside and decided if I was an obsessive binger on all things to do with this case, and true crime in general, that it was a good use of time.

I have noticed that there are many many posts that have very late comments added, some 5 or more years later from people who often seem to have a pretty close tie to the subject of that post. Like someone will state 'Hey this guy was my neighbor.../I went to school with.../I'm related to...etc etc.

I'm wondering if the blogrunners have gone back through the posts and tried to contact some of these people. Sure, many if not most would be dead ends, but a lot of them look genuinely like they might have some information to add. I noticed one yesterday from someone who knew Karl Stubbs and the nurse that (tried to) care for him. Yet there is no comment after theirs so its looks unanswered to me. There are many similar posts ending this way.

Is an opportunity being missed here?

I apologize to Grim

Um, er, Ok.
Tell you the truth mate, I've always rather enjoyed it. I regard it as the lighthearted in-flight entertainment on what is overall, actually a pretty serious subject.

I happen to have a good memory and I try to deal fairly with all the varying aspects from the different elements of the case and interested parties that at first glance add up to one big contradiction.
But the way I look at minutiae is that it's the big stuff broken down into bite sized chunks.
Or the cumulative effect of all the minutiae is the big picture.
Take your pick !!

I mocked you because you had a lame Avatar pic

It may have been lame, but it was photogenically lame !

THT Said : "I have noticed that there are many many posts that have very late comments added, some 5 or more years later from people who often seem to have a pretty close tie to the subject of that post ... Is an opportunity being missed here?"

There's a lot of skepticism here toward any claims to connections without verification or proof. Then there are connections that really don't provide any relevant information to the issues being discussed these days.

For example I've mentioned before some family connections to a 'player' or two without any interest, and I've also been to one of the places, back in '69, which I never mentioned largely because nothing happened of any interest to the blog (one possible [I say probable] encounter with one Manson Family member but it doesn't contribute to solving Helter Skelter, drug deals, piggies, murder, Bugliosi, Hendrickson, etc.).

But by and large I suspect a few of any claims to Manson Family 'stardom' connects could have value to the latest debates and sleuthing.

THT, we do follow up on many of the people who leave "late" comments to our posts and claim to have known someone from the Family or about a particular event to do with the Family. As you surmised many, if not most, of them do not pan out. Generally, in the end, they want to know if we can put them in touch with a Family member.

A few do offer a nugget or two of info which we relate to the blog readers though most do not want their names used so it isn't always apparent that we've followed up.

Regarding Karl Stubbs- We did a couple of posts about his murder and even visited, in person, with the neighbor that found him. That came about because of a tip we received.

Doug,
I don't understand either.
Whut

I believe Doug was saying he had previously posted links to the Epix series.

1) I cannot watch the Epix (or, Oxygen) docs here in Canada

3) I'd welcome The Colonel's review of the series

Thank you for your responses.

I brought it up because a few of the 'late' comments I had seen really didn't seem to be famehunting. Most seemed to be from infrequent blog users who had somehow been informed that a person they knew or had a connection to was a topic of interest.

And yes, I'm sure the vast majority are dead ends or ultimately not that relevant.

I guess I'm hoping that as key players die off, rather than the chances of further personal accounts dwindling, some people might feel it is now safe(r) to speak up.

Now, it's clear Doug.
Thanks!