There has been much discussion about who designed and built 10050 Cielo, and to a lesser degree, who was the first owner/occupant. The questions then often spill over onto a similar, but smaller, house located at 10048 Cielo, commonly referred to as "the twin house".

Using the  Los Angeles Department of Building and Safety website, it's possible to get some definitive information on the date of the initial application for both houses, which includes a very broad description of the project, its estimated cost, the name of the owner, the architect, the engineering firm, and the general contractor. You can also see what buildings, if any, were on the lot at the time the permit was issued. Using this information you can work up a decent framework, and based on that, do a reasonable job of filling in the blanks and drawing some informed conclusions.

Here's the master application for 10050. 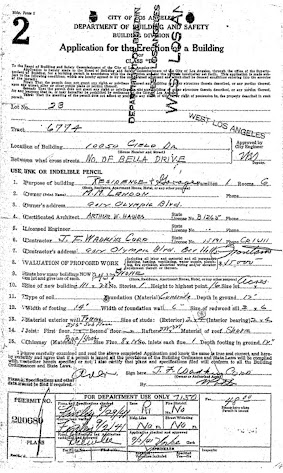 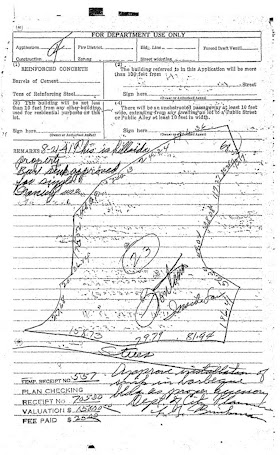 Now it gets a bit odd. Everyone agrees that there's a strong resemblance, stylistically--and it appears structurally and technically, as well--between the two houses. But the first construction, the twin house, lists no architect, while 10050 Cielo does--although it's not the architect to whom it's often attributed, Robert Byrd, but to another well-known So Cal architect, Arthur W. Hawes. 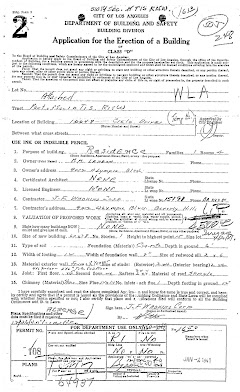 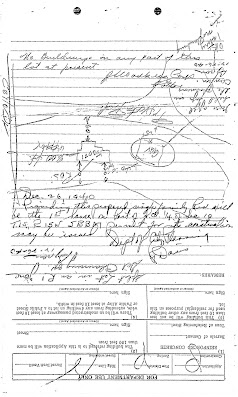 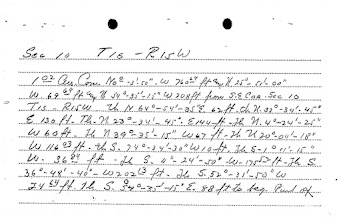 Interestingly, when most of the permits were issued, the owner listed for both properties is the same, M. M. Landon, and his/her address, 9012 Olympic Blvd., is the same as the address for the general contractor, J. F. Wadkins Corp. Since Wadkins' mother-in-law was named Minnie May Landon, this implies that the contracting company had some form of insider interest in the two lots at the time of construction; notation on the application for the twin says that it's the first house in Section 10.

Michele Morgan, the French film star for whom the house was supposedly built, appears as "owner" on only one document, the permit for the swimming pool, which was done by a separate contractor. I think it's reasonable to consider that she may have become interested in the lot, possibly before the twin house was built, and consulted with Hawes, the architect, for a design. She may have then committed to the purchase conditional on construction. Alternatively, the twin was built from the contractor's design (it's a simple house), and Morgan liked something about the twin and commissioned Hawes to design a larger, more fully-featured house up on the view lot, using the style of the twin as an inspiration.

But the sequence may more likely have been as described, below.

Arthur W. Hawes, the architect of record, may have been approached by Wadkins, the builder/developer, to design a house for the 10050 site. This was to have been the showcase and main profit center. This design was unofficially adopted as the basis for the scaled-down version at 10048. There are some sound, though not definitive, reasons for this. The contractor had not apparently built much of anything else, and hence would not have had much design experience to draw upon. By working with an established architect on the main project, 10050, he could then freely "copy" the design and leverage Hawes' experience. (Incidentally, Wadkins died at age 48, two years the after 10050 was built.)

Here follows a timeline of applications:

NOTE: Given the above timeline, the twin house was likely completed ~6/1/41.

So far as the attribution of Hawes as the listed architect of 10050, there is to my eye, at least, supporting evidence in some of the design features for the McClintock-Swedlow house, built from a Hawes design in 1940, the year before both 10050 Cielo and the twin were built. In particular, the LR has some close similarities in exposed beams, location of the fireplace, type of windows used, and relationship to the entryway. 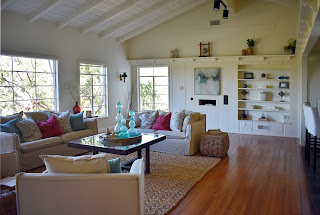 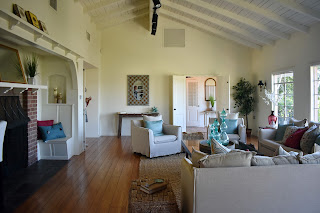 There is some level of similarity in the use of windows in one of the BRs; it's similar to the 10050 guest BR. 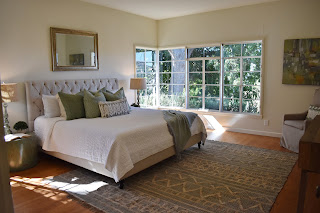 My best guess at this point is that Wadkins was relatively new to residential construction, having worked for the telephone company for a number of years.  Wadkins resumé. He may have ambitiously raised money to purchase at least two lots in a new tract, and foresaw exploiting the better one, 10050, as the main profit opportunity, and engaged Hawes to create a marketable design. Wadkins may then have scaled down the design himself and built the twin--mainly in hopes of selling it first so as to be in a more solid cash position to proceed on 10050. This apparently did not happen, because it looks as if Morgan saw the 10050 lot, or even the early stages of construction, and committed to it in some fashion, ordering a swimming pool, a BBQ shelter, and detaching the garage before she took ownership, or just after, paying $32K for the property. 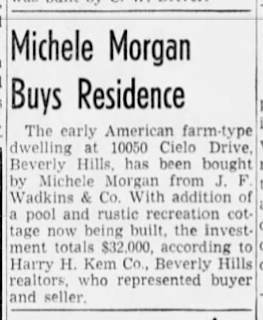 Those wishing to drill deeper into the building/repair history of the two houses can use the LADBS website and request additional documents.

It's pretty well executed, in my opinion.

Interesting article. I like filling in as much of the background as possible when I think about this stuff.

I've started a GoFundMe, and I expect you all to dig deep.

Sorry, Bunt. I'm in that gym with personal trainers I created with my mind.

Are there any image-management tools for Blogger articles? I'm displeased with the images I put up and would like to make future articles more useful to the readers.

E.g., the original jpg files from the LADBS are about 5 MB each. I would like to be able allow an enlargement, but probably not to 5 MB. I can reduce the files size, all right, but it seems like when I import any sized file to the article, Blogger creates a frame size that it likes, by default, and now there are two problems:

1) The image in the article is not optimum size when the viewer reads it: I would like to be able to control frame size; and

2) By clicking on the native image, I would like the reader to have have an enlargement of my own specification.

Are you aware of any techniques, or better, any documentation for Blogger's compose tool suite?

That's a better question for Matt probably. I just peeked under the hood and it looks like Internet 2005 in there. I noticed you're figuring out the margins and whatnot. I've been fixing them for people here and there. Unfortunately, I haven't made it beyond removing formatting what I cut and paste in from html.

I always thought Robert Byrd was the architect.

Yeah, I did too, but no one ever quoted a source, then I found out otherwise in the records.

It's an example of how urban legends are born, looks like.