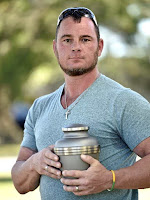 I'd love to see Jason Freeman play a lawyer. Who needs all that college anyway?

LOS ANGELES - A probate court judge Tuesday took under submission a Florida man's assertion that he is the grandson of mass murderer Charles Manson, a claim being challenged by a former Manson pen pal as well as Manson's professed sister, who are also vying to administer the late cult leader's estate.

During Tuesday's virtual hearing, Los Angeles Superior Court Ruben Garcia said he will decide by May 20 whether 45-year-old Jason Freeman of Bradenton, Florida, is indeed the son of Manson's late son, Charles Manson Jr., who was also named Charles Jay White and who committed suicide in June 1993.

Alan Davis, an attorney for Dale Kiken — a lawyer and current temporary special administrator of the Manson estate who is advocating for Freeman's kinship claim — said that two court events conclusively establish Freeman's claim to be Manson's grandson.

In February 1986, an Ohio judge found that Freeman was the son of Charles Manson Jr., who was ordered to pay child support payments to Freeman's mother, said Davis, who added that proof of Manson Jr.'s payments to the woman have been documented.

Freeman also addressed the court during the hearing, saying he was a freshman in high school when his father died and the only reason he could continue playing high school sports was because of the child support payments his mother received of more than $600 a month.

Davis said the Ohio order remained unchallenged for decades until the current challenges by former Manson pen pal Michael Channels and by Nancy Claassen of Spokane, Washington, who alleges in her court papers that she and Manson had the same mother and that she therefore is his "sole heir-at-law."

"All of a sudden we're dealing with an estate and we have all these people coming out of the woodwork," Davis said.

But attorney Timothy Lyons, on behalf of Channels, said Judge Clifford Klein, who previously presided over the case and has since retired, gave no weight to the Ohio court decision. Lawyer Dilair Nafoosi, on behalf of Claassen, said the Ohio ruling dealt with child support and not whether Freeman was a Manson heir.

Klein signed an order in 2019 directing Freeman to take a DNA test, but his ruling was reversed by a three-justice panel of the 2nd District Court of Appeal in 2021. Freeman once told Klein that he would not voluntarily agree to DNA testing, but would obey a court order to do so.

Channels had asked for the DNA test of Freeman. In his court papers, Channels said Manson's 2002 will, filed in Kern County in November 2017, named him as the executor of Manson's estate.

Freeman, acting as his own attorney, has filed court papers stating that probate of the will should be denied because it was created "as a direct result of undue influence exercised by (Channels) over (Manson) and is not, and never was, the will of (Manson)."

Manson suffered from heart disease and other ailments before he died in 2017.

"Because of his weakened condition, (Channels) ... gained his confidence and easily influenced (Manson) to leave all of his estate to (Channels)," Freeman's court papers state.

Manson and members of his outcast "family" of followers were convicted of killing actress Sharon Tate — who was eight months pregnant — and six other people during a bloody rampage in the Los Angeles area in August 1969.

Prosecutors said Manson and his followers were trying to incite a race war he dubbed "Helter Skelter," taken from the Beatles song of the same name.

Manson was convicted of seven counts of first-degree murder and one count of conspiracy to commit murder in the deaths of Tate, the La Biancas, and four other people at the Tate residence — coffee heiress Abigail Ann Folger, photographer Wojciech Frykowski, hairdresser Jay Sebring and Steven Earl Parent, who was shot in his car on his way to visit an acquaintance who lived in a separate rented guest house on the Tate property.

Manson and followers Charles "Tex" Watson, Leslie Van Houten, Patricia Krenwinkel and the late Susan Atkins all were convicted and sentenced to state prisons in 1971. Manson also was convicted in December of that year of first-degree murder for the July 25, 1969, death of Gary Hinman and the August 1969 death of Donald Shea.

He and the others originally were sentenced to death, but a 1972 state Supreme Court decision caused all capital sentences in California to be commuted to life in prison. There was no life-without-parole sentence at the time.

And yet, Michael Brunner has no dog in this race...brutal

Who ever wrote the article reflects the fairly, new to me, theory that Parent was coming to visit, instead of leaving. It would be interesting to know where the information was sourced.

This one seems rather well settled, legally.

Channels has no legal standing, at least as far as I am aware. An actual will has to be witnessed by *someone*. According to Channel's own statements, Manson wrote out and signed the will, then mailed it to Channels, unwitnessed and undocumented.

This is all according to what I've read, so this may or may not be true. If true however, Channels is wasting his time.

The "sister" also takes second seat (at best) to an offspring. Assuming the grandson is actually the grandson, she too is wasting her time.

Pooh Bear is most verifiably the direct son of Charlie & Mary, but lacking a birth certificate he too has been cut out of consideration.

Freeman is most almost certainly the son of Charlie's first son. I don't know what to make of the DNA refusal, but this seems well documented and hey - let's face it - Manson himself seemed to accept Freeman as his grandson and he engaged in numerous prison pay phone conversations with Freeman. Of all of these people, Freeman seems to have the most solid documentation and I can't imagine how a judge would rule any other way - assuming all that is known as described above is true.

All of this said, one wonders what on earth is being fought over. I suppose potential future song royalties might be up for grabs, though that is legally still a big question mark. The last legal ruling on that one favored any profits going to victim heirs, though that could well be challenged in courts in the future. Manson had no real physical belongings to speak of, and his image and person are freely used by those who seek to commercialize such things. Claiming ownership of this estate seems more a pain in the ass than it does any sort of material profit, at least in the foreseeable future.

Jason Freeman is an interesting cat. Judging just what we know and have seen for ourselves, he seems driven by some sort of personal desire to connect with his broken familial past, and that I can understand. I was also impressed with his desire to share the end-of-life process with those closer to his grandfather than he was - he could easily have avoided all of the weirdness and just laid the old dude to rest. Then again, one imagines he did profit to some extent by participating in the documentary of the proceedings - but once those profits have been realized, why on earth continue to pursue heir recognition? Are there any real future profits available in this mess? Seems like there is more expense in challenging and winning such a case than is worth the bother, unless there are areas of profit there that I am not aware of.

At the end of the day, Charlie Manson's remains were washed down shower drains belonging to the likes of Sandy Goode & Grey Wolf hours after the filmed riverside "service". The dusty remains of that pathetic feller have long ago been washed into local streams. And that's rather as it should be, probably. All that is left of this pointless and highly destructive excuse for a human life exists in the realm of court documentation, boogey-man stories and the fading memories of former lost girls now turned old women.

There is nothing left to claim. It is time to move on.

Tobias, I deep-dived this several months ago. I believe the issue is Jay White ignored a court summons, or never received it, and lost the judgement when he did not appear in court. Pooh is dq'd because George and Elsie Brunner (maternal grandparents) adopted him.

What I found in the public records is a handwritten form with dates Jay was either supposed to contribute to Jason's support or actually did pay small amounts.

I believe that the judge discounted Michael over the lack of a birth certificate rather than the fact that he was adopted. At least, that's what I remember reading back at that time.

You could be right. Thanks.

Great question: where's the value in the estate?

pen pal of Manson? What a great life to aspire to.

So much for The Will of Man.

Freeman being his grandson isn't "well documented". There is actually very little and if I'm not mistaken, his actual birth certificate is blank under father. The future holds many, many surprises.