Kit Fletcher is Janet Marie Owens. But is she also Cory Hurst?

Cory Hurst's feigned disgust during Robert Hendrickson's 1973 Academy Award nominated documentary Manson will never fade from Manson lore. Hurst arrives onscreen a third of the way through the film sounding like she met her connect at Pioneer Chicken on the way to her interview. Nevertheless, she remains more palatable than Alice and the other Goons Bugliosi scraped from the floors at Sybil Brand to serve as witnesses against the foolish Susan Atkins, and manages to drop a couple of the best lines in the study before exiting the stage.

Assuming sweet Joan Huntington did not write those lines for her. More recently, the band Slipknot placed Hurst's words into the minds of a younger generation. (I also found another brief take on the Slipknot intro here.)

While not everyone is familiar with Cory Hurst, or in fairness might not care a whit since no payday exists at the end of yet another depressing rainbow once Hurst reads her lines and hands things off to less attractive broken women, Hurst's small role in Hendrickson's documentary caught our attention.

Regarding the research, were home hair clippers not a thing yet in the 1970's? Yikes. 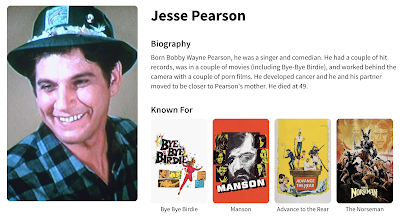 Jesse Pearson was Hendrickson's Don Pardo. "Teenaged Cory Hurst was arrested for a minor offense, possession of a marijuana joint, and placed in the same cell as Susan Atkins, a confessed murderess," narrator Pearson tells us.
Teenaged? Locked in a cage with a m-m-murderess? We had to check. 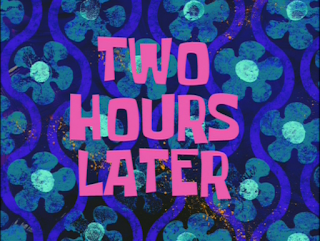 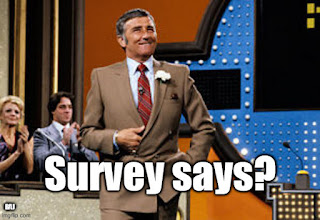 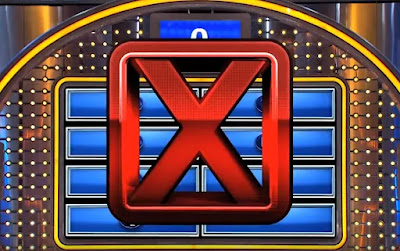 The sun had set on Hurst's teenage days half a dozen years earlier. At the time of her incarceration with Atkins, Fletcher/Owens/Hurst was almost twenty-six. Adding to the mystery, Lt. Earl Deemer thought Fletcher was a fella.

Sexy Sadie knew the truth and tried to run the same game on Fletcher that Charlie successfully ran on her. Unfortunately for the fam, Atkins' sweet nothings turned Fletcher into a prosecution witness.
From the transcripts:

No admonishments or nuthin. "You misrepresented yourself to the police and stayed in our jail under a false name? Hilarious! It's okay because we all know you're honest at heart. Let's move along and start repeating what Virginia Graham said earlier. I'm putting her in my book don'tcha know."
*Sometimes my quotes are not actual quotes. Don't blame me. All Cretins are liars.
Here's the Press Courier relaying what Atkins said in the Fletcher/Owens letter that landed Owens in Older's courtroom. Sorry I can't get you closer. A copy of the actual letter is located in Box 10 page 147 but appears to be missing at this time. Hook us up in the comments if you've got the goods. 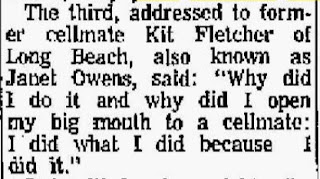 So Kit Fletcher is Janet Marie Owens. She's the daughter of a career Navy man. A marijuana joint gets her locked up close enough to Susan Atkins to eventually elicit a confession. Owens' testimony begins on Page 17 in these transcripts provided by almighty Cielo.
Confused and filled with legal questions after reading the testimony about the letter, I emailed Dreath and asked what was going on in the courtroom that day. Why does attorney Shinn care so much about Atkins' personal mail? Dreath's responses are in italics.
The letter testified to was mailed, notice that becomes an issue with Shinn. There is a presumption in the law that a letter deposited in the mail is received by the addressee. However, there is also a presumption that the mailing person sent the letter if it was received. The point of the testimony is to establish that Fletcher/ et al received it. That is all VB needs. A confession gets around the hearsay rule as a statement against interest. 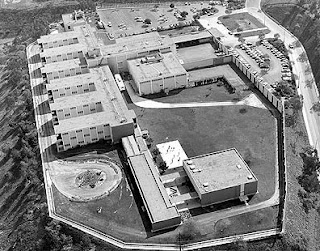 Susan Atkins was naive to say the least. The folks at Sybil Brand and the LAPD were monitoring her mail. Why she thought her jailers wouldn't do just that, rights or no rights, confuses me. Photocopies were made.
And btw didn't Atkins say she told a bunch of crazy stories around the jailhouse to keep the lesbians away? What's all this woman you are beautiful stuff?
Why is the defense so concerned with police intercepts of Atkins' mail?
First, the defense never offered was going to be: a frame up. Stealing letters is some evidence of that.
Second and more importantly, dumbass…I mean Shinn at least had some brain electrodes clicking and whispering to him, ‘There might be something wrong with stealing and photocopying inmate letters without reading them their Miranda rights.’ Of course, since Shinn is part of the Nightmare Team, he couldn’t remember the California inmate mail rules allowed it. But at least he went….”Huh…something is wrong here…I think.'
The Supreme Court invalidated those rules in 1974.
-------------
If you have time, read a few minutes before and after the Owens testimony. Bananas. Ronald Hughes arrived a few minutes late to court and explained to a chastising Judge Older he possessed neither car nor home phone, his ride never showed, and xyz.
"Just be happy I made it, your judgeness..."
Older glared down at Hughes. His chagrin is obvious. "We all have problems. I don't want to hear yours."
Caught off-guard by Older's total lack of empathy, I laughed. Snorted more like. Don't you mess around with the old judge. He's hiding a six shooter under those robes.
And is fair:
SUSAN’S LETTERS BARRED IN COURT
MONDAY, OCTOBER 26TH, 1970
LOS ANGELES, Oct. 26 – Letters implicating a defendant in the Tate-LaBianca murder trial were barred from evidence today pending results of a defense appeal for a higher court ruling on admissibility.
The letters, written by “Manson family” member Susan Atkins, reportedly include passages which implicate her in the murders. They were scheduled to be read today as the trial entered its 20th week.
However, Miss Atkins’ attorney, Daye Shinn, objected that the letters should not be admitted into evidence, since his client was not advised that their contents could be used against her.
Los Angeles Superior Court Judge Charles Older granted Shinn’s motion to take the matter to the district court of appeal, and granted a delay for that procedure.
Contents of the letters written by the 22-year-old defendant while she was in Sybil Brand Institute have been censored by Judge Older to omit any reference to other defendants.
One of the letters was received by a Long Beach resident, Janet Marie Owens, on Dec. 18, 1969, a week after Miss Atkins was indicted for the murder.
Deputies said that all “Manson family” mail was ordered photostated and turned over to Los Angeles police department investigators.
One of the investigators, Sgt. Manuel Gutierrez, said he had asked officials to photostat all “family” mail to assist him in further investigation of the case. He admitted that if incriminating evidence were found in the letters he would “definitely use it against them.”
Miss Atkins sat chatting with two other female defendants — Patricia Krenwinkel and Leslie Van Houten — and seemed little concerned that the letters were to be read to the jury. Meanwhile Charles Manson, the “family” leader, still clean shaven, sat listening intently and offered suggestions to the four-lawyer defense team.
By MARY NEISWENDER
-------------
Here's the local gang back in 2013 discussing another letter Atkins wrote Fletcher that was for sale for ten thousand dollars a decade ago. I'll tell you everything Mark Ross told me for eight and the location of your favorite taco truck.
Noticing Chris B in the 2013 comments, I contacted him and asked what he remembered. Chris said those statements were made by another Chris B and therefore he shall henceforth be known forevermore into perpetuity as Tall Chris B on account of his being six feet five inches tall.
But then he remembered he'd indeed made those long ago comments, so I'm unsure if the Tall part remains added. Chris also linked me to a list he made of prosecution witnesses in a blog post everyone new to the cases should bookmark immediately. Taking that list back to the comments section of Austin Ann's 2013 post, it's clear some of the blog crew had the same idea. Max Frost asks Hendrickson to clear the air but does not receive an answer.
Max is smart. Deb once told me Hendrickson had everyone sign a release and kept all of the releases. Which means this question is answerable. We also might die wondering. Hopefully, Owens is not in our final thoughts though. That'd be so odd.
Do you ever attempt to arrange your happy memories for when your life flashes before your eyes during your last seconds, or are you hoping for the best? I think about it a lot. Please let me remember this day and not that one, O I beseech thee.
If you stare at these two photos long enough, the bottom one turns into a sailboat. 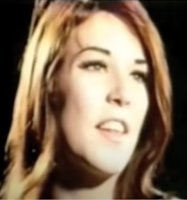 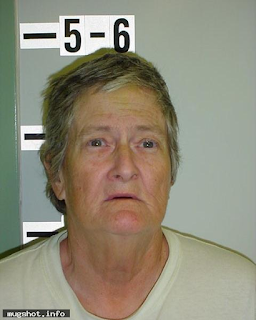 Same lady.
Like the more famous Manson prosecution witness Linda Kasabian, Owens never straightened up. She was in prison on and off from 2000-2010, and then again from 2012-2014. Sixty-nine years old at her final sentencing, Owens lived the hard times for real.
"You are of the highest quality and beauty since Manson," Atkins told Owens in a letter. Sadly, time smacks the pretty out of all of us. No one escapes.
Some think Owens died in 2015. Others say she's in a place where she doesn't understand the words people say and her government benefits never touch her hands. I'd choose dying in 2015 if those were my options. But I know life doesn't work like that.
Before I go, I have a quick question. Why do you think Hendrickson had Hurst tell the stories about the family's sexual kicks obtained from murder, Liz Taylor, and Tom Jones in his film? I understand Bugliosi wanted several witnesses to repeat the same things so his shady witnesses appeared less shady to the jury, but what did Hendrickson need in his moment?
I'd get so much more out of Hurst looking straight into the camera and coming clean. "Sadie sent me a letter saying she did it and btw here's the letter, Greenwhite. It's yours because I love you."
I'd believe her but also laugh. Everybody knows I'm forever down with Joan.
This post was created with the help of Beckham, Bunt, Chris B, Deb, Doug, Dreath, and Montana. Many million thank you's to you all.
Posted by G. Greene-Whyte at 7:38:00 AM

The bottom photo reminds me of the Golden State Killer.

For someone who had been through the criminal justice system more than once, Atkins seemed not to have never heard of the policy of keeping your mouth shut.

Something is heresay if it is an out of court statement by a declarant that is unavailable. [i.e they can't be found, are dead, refuse to testify] in order to introduce the statement there has to be an exception to the hearsay rule. All the exceptions are covered in Fed. Rule of Evidence 803. The exceptions are based on the idea that the nature of how the statement is made is an indication of its veracity. Like a business record, or your dying words, or an excited utterance "wow, did you see how fast that guy was driving!." An admission against self interest " I fucked that up" but when a party, here the defendant, makes an admission. That is a specific type of out of court statement not considered hearsay, and comes in under Rule 801, so it needs no 803 exception.

Not exactly sure how statements get in if the declarant is not available or won't testify. David probably knows.

Great post and comments.
I always liked what she said at the end of the interview, "I mean, I don't know".
It reminds me of my daughter when they were teenagers. It adds to the fact that she's so young. Too bad she chose the road to addiction. Does anyone know what has become of her?

I just reread ALL of the comments. Please disregard the last sentence of my previous comment...