Steve Grogan aka Garth Tufts and the Shotgun

Inyo County District Attorney Frank Fowles had an agenda. I expect that he was a bit miffed that Los Angeles County had swooped up most of the people arrested in the Barker Ranch Raids. His county had spent a lot of time, manpower and money on the Manson Family and Los Angeles was getting all of the press. Few, if any, of the people arrested in Inyo County were convicted of anything in that county. They had either been released for lack of evidence or transferred to LA to face more serious charges.

By December 3, 1969 only 11 of those arrested remained in the Inyo County jail and the announcement had just been made that Charles Manson and a few of his Family members were responsible for the Tate and LaBianca murders. 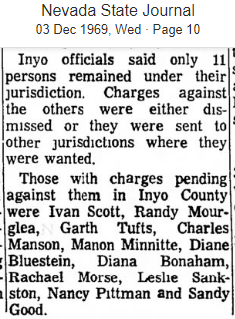 One person that Fowles set his sights on was Steve Grogan. This letter sounds like he wanted Grogan in the worst way. By this time Grogan had been transferred to Los Angeles to answer for the stolen truck charges and the wanted charge for the escape from a mental hospital in Ventura County. Grogan settled both of those charges and had been frequenting the Los Angeles County Court House with other Family members.

The last time you were up here I mentioned that there was a Randy Morglea who was apprehended with Tufts during one of the California Highway Patrol raids which occurred on October 10, 1969.  Enclosed is a California Highway Patrol report concerning the particular raid, and on page 3, in the last paragraph, you will see Morglea's name mentioned.  Morglea was charged with possession of a sawed-off shotgun and when it appeared he was 15 years old he was certified as a juvenile.  Subsequently, he was sent to Patton State Hospital along with Dianne Lake under a conservatorship.  His treatment was terminated at Patton and he was released by our court into the custody of his mother.

I have received a request from Vincent Bugliosi to recharge Tufts, aka Steve Grogan, with the possession of the sawed-off shotgun.  The only possible defense would be that the shotgun was actually possessed by Morglea instead of Tufts.  A statement from Morglea would be very interesting and even an admission that the shotgun was possessed by Tufts would give me perhaps all I need to put Tufts away following a conviction when I re-file.

You indicated that you had never talked to Morglea, who also was known by the name Scott Bell Davis and Todd.  He was with the Family for quite a while and might have some interesting information for you.  In any case, when you question him, I would appreciate it if you slip in a question or two about who possessed the shotgun.  This would be very helpful to me and any statement in that regard would be valuable as the least I could do is use it as a prior inconsistent statement when he called as a witness.

His mother is a member of the "Fountain of the World" religious sect.  She appears to me to be a very nice lady although rather strange.  She is totally against Manson and I am sure she would help us any way she can.  Morglea is supposed to be with Mrs. Todd at this point.  Her address is as follows.

Her phone number at her employment is Area Code 213-348-5161.  She also has a friend where she may be reached and her address is as follows:

I am also including a psychiatric report on this boy for background information for you. If you have any luck and can help me out let me know.  We are all anxious to see Tufts put away.

*The psychiatric report on Morglea was not with the documents I received. 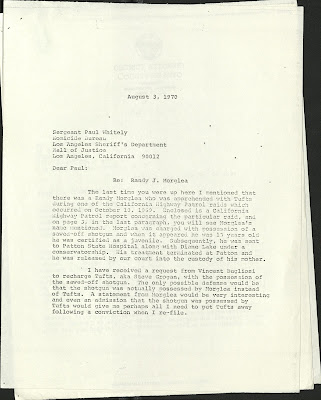 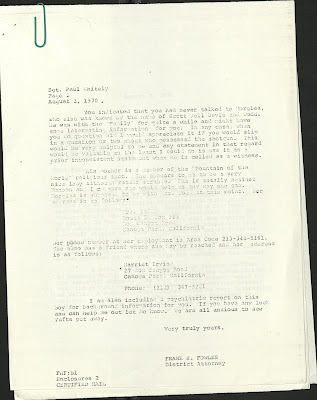 Apparently Frank Fowles did get his wish. Grogan was to appear in court, in Inyo County, for possession of the sawed-off shotgun November 11, 1970.

Fowles victory was short lived because on December 18, 1970 Grogan was released from the Inyo County jail to Los Angeles County to be charged and prosecuted for the murder of Shorty Shea.

By the time Grogan was paroled in 1985 the statute of limitations for the sawed-off shotgun charge had long since run out.

While I knew that Dianne Lake aka Diane Bluestein had been sent to Patton State Hospital, I did not know that Hugh Rocky Todd aka Randy Morglea had also been sent there. The first article in this post is dated December 3, 1969 stating that all 11 with charges pending were still in Inyo County’s custody, it was quite some time before they were sent to the state hospital apparently.

A previous post about the Fountain of the World quotes a December 11, 1969 article where Rocky Todd’s mother says that she has not seen or heard from her son since around October 1, 1969. That’s a long time for a juvenile not to have been identified and reunited with a parent. Rocky did not look particularly old for his age, he was only 15 years old. 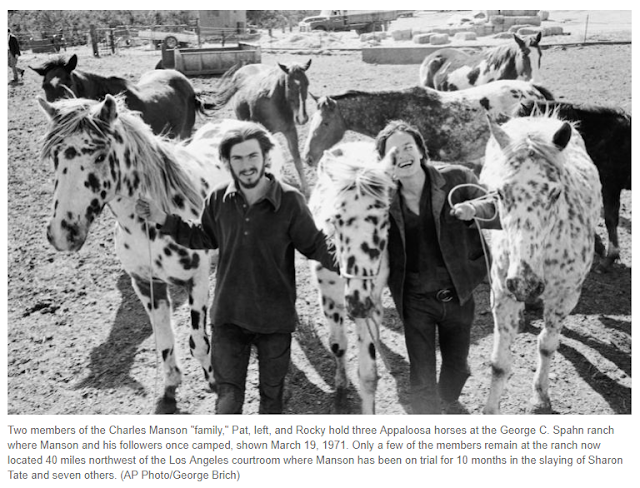 Thanks for this, Deb. Excellent history here.

Whatever happened to Morglea? Yet another one who has never told his story....

He passed away last year

I found some addresses for him from the late 80s early 90s that were in Harbor City, Long Beach and Torrance CA.

I was clued into his death from comments made by Gorodish and Cielodrive in this post:

There is/was a real Randy Mourglea, who lived about sixty miles from Todd's birthplace in North Carolina, and would have been around 7 years old at the time of Barker.

No idea what the connection was, some cousin maybe. Straight out of the Bill Vance playbook.

Rocky was said to have adored Pat Krenwinkel and, apparently, followed her everywhere to talk with her.

Fun Fact - when Pat skipped town and was staying with her aunt she apparently had a brief affair with the then approximately 16 ir 17yr old musician Topper Price. A friend of Topper broke the news that the "Pat giving you all those messages...swell, she's Krenwinkel..."


Here's a bit of Intel on Topper

According to Ed Sanders "The Family", there was a "computer engineer" named Gary Tufts who, along with Tex, Bruce, and Gypsy, drove a stolen red '69 Ford from Spahn Ranch to Goler Wash, in mid-September 1969. Tufts was described as a "temporary Family associate". He supposedly spent the night of Sept.14-15 at Myers Ranch, then promptly vanishes from the story forever. I wonder if Clem copped his Tufts alias from this guy. I can't find anything else about this Gary Tufts.

According to Ed Sanders "The Family", there was a "computer engineer" named Gary Tufts who, along with Tex, Bruce, and Gypsy, drove a stolen red '69 Ford from Spahn Ranch to Goler Wash, in mid-September 1969. Tufts was described as a "temporary Family associate". He supposedly spent the night of Sept.14-15 at Myers Ranch, then promptly vanishes from the story forever. I wonder if Clem copped his Tufts alias from this guy. I can't find anything else about this Gary Tufts.

This seems very likely, Gorodish. Gary Tufts' father was Garth Milton Tufts, the exact alias that Grogan used. One of the birthdates given for Grogan on Deemer's list is 5-24-46 which is Gary Tufts' birthdate.

Gary Tufts grew up in Petaluma CA but lives in the gold country now.

Who is it, Kevin Raph?

No it's definitely not Kevin. I just noticed that Pat is also in the top courthouse picture, on the far left, next to Ouisch Moorehouse.

Huh? I thought the Malibu fire of Sept. 25, 1970 razed the entire ranch to the ground, and the wreckage was bulldozed into the ravine behind the ranch. Yet there's still horses quartered there six months later? Also note the structures and vehicles in the background.

The fire destroyed the western facade. The ranch didn't close. There were some small temporary structures added after the fire

Thanks Cielo. You Sir, you know!

Rocky Todd’s mother says that she has not seen or heard from her son since around October 1, 1969.

So Todd was at Barker to witness the last two weeks of the insanity, at least. And probably heard a mouthful about the murder of Shorty Shea. Yet their doesn't seem to be a single interview with him--in the media, from the trial transcripts, or the police files. Or am I wrong?

You're not wrong about there being no interview that we know of. He was in custody in the Inyo County jail at least until Jan. 2 1970 when it was discovered he was a juvenile. He was then sent to Patton State Hospital for a time.

That timetable doesn't leave much room for the media to have known about him. He may have been interviewed by LE but didn't have anything of substance to say. He held out giving the authorities his true name and age for a long time, it's easy to believe that he didn't give up much in an interview.

Brain cramp over here...who is "Pat?"

Pat is the person in the photo with Todd and the horses at the end of the post. He is also standing with Grogan and Todd in the first photo.

He was arrested with another guy and charged with the endangerment of minor children and marijuana possession. His last name will be familiar, as he is the younger sibling (10 years younger) of a deceased family member.

Thank you Gorodish. Good job putting that together, it make perfect sense now.

Yes. I worded my question wrong. I should of said "what is Pat's true identity and background info."

You've taken me back to a "Jenny" rabbit hole...my MF-related kryptonite.

Doug, i'm afraid that Jennie gives me a headache.

It's what Sherlock would describe as a three pipe problem. We'll get there in the end.

"You know my methods. Apply them."

‘By the time Grogan was paroled in 1985 the statute of limitations for the sawed-off shotgun charge had long since run out.’

Apologies if this is too political, but I don’t have a good feeling about the legal system in the US allowing the statute of limitations to be retrospectively extended. Appears to favour the plaintiff. Are law firms in the US short of cases and thus promoting the extensions?