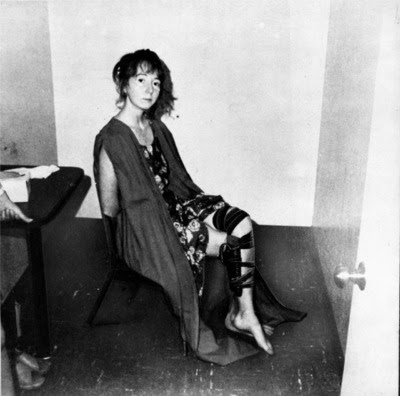 Women go crazy differently than we do. It's like they don't know the train has left the tracks.

THE DOORS
"You're Lost Little Girl"

long time since i heard that Doors tune. very appropriate. almost as appropriate as

Okay, and since were at it;

The Ballad of Brenda McCann
The Shangs

These naked kids of the desert, who we correctly call insane and evil, we have to also call part of American history. They started out as kids getting high and doing their own thing and they brought a decade to an end and impacted the culture of their time.

Ya know I never was on board with that old " They Killed the sixties" thing...

The decade was ending anyway. It was late summer of 69 when the murders happened - if they never went to Cielo would the decade have stopped??

Also the whole " summer of love" thing, and the Scene at the Haight was well over at this time...

Not that those were the only places that mattered- but the epicenters of the movement were no longer bringing in hippies by the hundreds...

What if the whole Hippy thing was another of many Fads of time, and like other fad- it just ran its course???

Charlie gets alot of credit lol- but did he really change the course of History?? did these crimes really go that far- an entire nation was willing to change its social values and the direction of its future over what these drugged out kids did in the course of a few nights???

Not me... I am not buying that now, and wouldn't have bought that then...

How much do you think that the time between the crimes and when they got caught had to do with it???

If they had gotten caught in the next few days would things be different?

If there was no time/need for Hollywood to get paranoid- if There was no time for the legend to grow- if the " Beautiful people" didn't get ugly with each other over it... If there were caught red handed and Bugs didnt need to create his own motive...

Would they still be who they are today?? Would Charlie have become who he is today??

Or would they have been labeled what they really might have been all along...

A bunch of desperate, hungry, confused kids who got really messed up on drugs and went too far at the instigation of an older ex con who used them to try and keep his own hands clean...