With all the excitement I almost forgot. T.J with one of his sisters and a few of his kids. 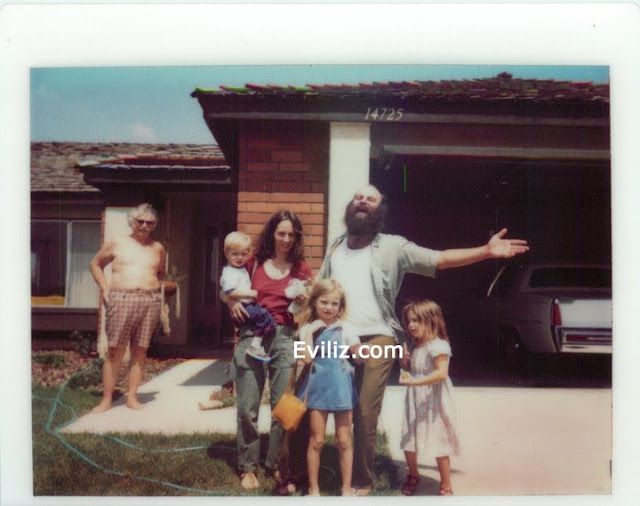 I know almost nothing of Ansom 13?? but whoever this is looks pretty normal ....

I would love to get a short intro to Ansom 13- I assume she is another after the fact hanger on????

Was ansom 13 at the ranch or after?? Never came across her in anything.. her name comes up in the blogs- but not in any of the books or movies I own.. when I google her- not much shows up but her name and old u-tube videos???

Is she important at all? Cause if not- it doesn't really matter...

The Greywolfs, and Stars are freaks to me and not relevant to what I am trying to learn... so if she is one who came later and made a name for herself just by being associated- I'm not interested...

Ansom is talked about quite a bit in Bill Nelson's second book. I know that her name translates to Ansom (manson) 13 (charlie's cell # on Death Row).

I read a few years ago on Mark Turner's site I believe that she died of cancer.

Thanks!!- I will have to check out one of his books- I heard he was nuts, so I never bothered- but Liz liked them so maybe there worth a shot...

Nelsons books rock, i think. just like the other books there is some fabrication but other wise.....
St-i can lend one to you if you like? you know how to contact me.

Tj was first married to a Barbara
a.k.a. BO-short for Rainbow. she was not Bo Rosenburg as some think.

Ansom 13 was his second wife. she was much younger tha him. i only really saw Ansom in the geraldo fiasco, so i cant say for sure if it is her in the pic.

Ansom came on the scene post murders. so i am thinking maybe when TJ dipped out after Crowe wherever he went he met Ansom
and showed up back at the ranch with her when things settled
down. just my theory.

Thanks- that is good enough :) I watched that Geraldo reunion special along time ago- I'll view it again. There are a few people in the Documentary I don't recognize- maybe she is one of them? TJ is obviously back at the ranch at that time...

Anyway she is not relative to the motive, and not a major player- so ill leave it too RIP as far as she is concerned....

That's not Ansom. Ansom came AFTER the murders, almost immediately afterwards thru TJ. They married and stayed supportive of CM. Ansome was more or less a good friend of CM's. She passed away several years ago from cancer, not long after TJ's death from a car wreck.

Ansom was the one with the Charlie stockings on. Her real name was Lori Mardesich-Walleman. Died after a dog bite.

Thanks again everyone- I will look at the link Matt :)

she died from breast cancer!!! where did you get dogbite ?

Evil Liz... my thought exactly! Dog bite!? It was cancer and she was very young when she passed.
Yes, she is in the Family Reunion special. That's her w/ TJ. She's wearing the manson face leggings.... yea...
Anyways, she doesn't play a big role... not much to say about her other than that.

I have heard breast cancer. I have also heard that she died from septic shock from a dog bite. I've never seen the death certificate. Doesn't really matter. She was just TJ's late marriage and had nothing to do with anything.

Evil, I like your website. Does anyone know who the guy with the mask was on Geraldo's 'Manson Family Reunion'?

I am pretty sure it was a guy named John. He has appeared in other shows about Charlie. He used to live at Spahn with his family that is how he met Charlie. I can't recall his last name but I am sure someone here will. I think after he left the ranch his young son stayed with the Family and was arrested with them at some point.

What a ridiculous mask too!

DOC- forgot to say
Thanks for your support!

Thanks for the quick response Eviliz. I hope that someone will post his full name. It's a question that has bothered me since the show first aired some twenty years ago. Also, I thought it was rude and unprofessional of Geraldo to mock and ridicule the guests. From what I have been able to research TJ was a Marine that got severely wounded in Vietnam. I think that even though TJ's beliefs were unconventional he and the other guests deserved some respect for being on the show and answering questions. As far as we know TJ and the other guests didn't murder anyone.