Bible Thumping Can't Save You


An older article from Tex's site.  He speaks about Susan being sick.

Our Sister Susan article taken from aboundinglove.org
Those who know Christ in prison have compassion for each other. (a.k.a.  thick as thieves) Compassion means "suffering with another".  Susan Atkins is a former Manson Family member who is now diagnosed with brain cancer.(I like to call it- her karma)  I'm told by a friend that "one leg is gone and she can't even sit up or lift her head." (again karma)

She is imprisoned at CIW where those Christian with her demonstrate compassion.  She is a dear sister in the Lord.
There isn't a lot of sympathy for her from the general public.
After serving 40 years in prison for her part in the Manson murders she asked for a compassionate release, but was denied. (Like when Sharon asked Susan for compassion for herself and her baby, and Susan denied her.) The doctor's only give her 6 months to live.(she managed to cling on a much longer)  She is one of those inmates, who has shown compassion to many undeserving women during her prison stay.  It is her time to reap compassion and prayer's from us who know God's love.

My prayers go out to Susan who came to Christ in 1974.
Chaplin Ray Hoekstra came to see me in 1975, telling me of her salvation and how she had written to Bruce Davis who came to Christ as a result. ( so if Susan never wrote to Bruce he would still be a heathen?) Chaplin Ray wanted me to receive Christ, which I did a few months later in 1975.   The testimonies he shared and the love of God working through many others opened my heart to the Lord.

Those who do not hold to the testimony of Jesus Christ
believe that one day justice will be served when murders like Susan, Bruce and myself meet the Lord.  To the contrary justice was served when Jesus took our sins upon Himself on Calvary's cross.  Our sins were placed upon Him in exchange for eternal life, because of God's mercy upon the sinner.
"God showed his great love for us by sending Christ to die for us while we were still sinners.  And since we have been made right in God' site by the blood of Christ, He will certainly save us from God's judgement." ( if that is what makes you feel better Tex, keep telling yourself that). 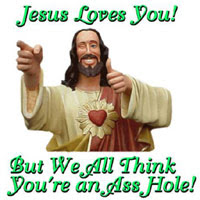 Where all the guys on MSNBC lockup I see while he is running a church and website???

The thought of him in the eighties with the feathered hair and cheesy mustache- having sex and kids- is enough to make me sick...

Nobody deserves to smile even for one minute less than this jackass...

God may or may not have given some compassion to Sickly Sadie towards the end- But Tex you are on the waiting list for a seat right in front of the hottest kitchen there is- and I hear the service is very slow.... God ordered you well done

Susan Atkins: Let's pretend a was never a lesbo. Forget that part.

Liz, my husband was reading over my shoulder and cracked up at your Jesus graphic.

thats one good thing about patricia krenwinkle,at least she did'nt find god and hide behind religion like many of the others.
last i knew she was taking responsibility for her actions and not putting it all on manson or the devil.

i wonder if tex and these other christians ever wonder if their victims would have found jesus if they had lived longer. also it is very hard to have a faith when your sister or aunt or mother is a murder victim, what about these souls they also victimized? i bet they believe tate and the others are in hell, and do not mourn that at all.

In her book Child Of Satan/Child Of God she says letters from Bruce........who had converted to christianity.......brought the little blood licker Sadie Mae Glutz into the Family Of God.

One thing for sure Susan Atkins wasn't trying to help anybody but herself.

This piece of sh*t has totally convinced himself that he is going to be saved from being judged by God after he dies, because......How does he know what is going to happen? Personally, I think he IS going to be judged, and the punishment will fit the crime. These people caused so much human suffering. What makes him think he is going to get off that easy? He is the true pig. A hypocritical PIG! Plus, he looks like Ted Danson now.....

In the spirit of Christianity, I must comment that as a Christian, one of the tenets is to not judge. I think all of these murderers will have to account for their horrors with a more powerful presence. I also think that they are paying their debt to society...and should never be released. Let God take care of his own. I'm not on this site to pass judgment on their souls...may God have mercy...as they need it. Roger1