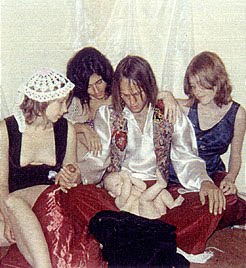 Cappy, Gypsy and Clem-not sure who the girl is all the way on the right. I'm sure one of you will know. The baby in this picture is Gypsy's. I heard that Clem is the father.

For the scramblehead that he was, the ladies certainly liked him. And he charmed his way out of prison too, whereas none of the others could......go figure.

i said it here before some place,
i think Clem was kinda cute!

and a better than average musician, apparently. I have no problem with him moving on, making something of his life. I was stupid when I was young too, not to the extent of this group, you know.

What is Cappy wearing?! I always suspected Clem was the father. Could the girl on the right be Squeaky? Similar hair and I have seen a her wearing that outfit before. Doesn't really look like her but it could be a bad photo

Actually it looks more like Brenda now I look again.

that is a great photo! thank you, Liz.

I'm going to guess that the girl on the right is Kitty.

Cappy looks like what she is wearing is exposing her whole nippleless breasts. lol

i'd say it's a serene looking nancy pitman.

That baby was NOT Gypsy's. She had her baby in prison, then the baby was put in a foster home. I think this is Sandra Good's baby.

It's Kitty on the right.