How Many Can You Name?

The Manson Mugshots. Can you attach a name to each face - without cheating? 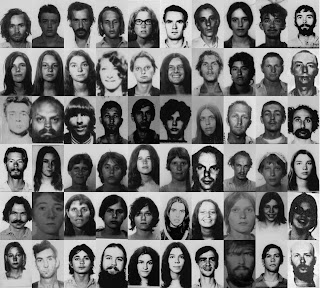 the girl between Squeaky and Ouish is soooo ugly it looks like she got fed baseball bats and crowbars....maybe even the occasional dodge bumper

and the guy third from the top on the far right....he didn't just get hit with the ugly stick he got hit with the whole damn tree

Yeah, that dude looks like Bozo's evil twin ... on acid.

That's the best I can do without cheating.

was bobby? I meant..

Let me put myself out there and take the chance of embarrassing myself (again)....

Bobby wants arrested in any of the spahn raids????

or is this just a collage of pictures of people who were at Spahn???

Just a collection of mugs.

I was only able to get a few...and that guy does look like a clown. That's why clowns are scary.

Matt isn't the guy between Bobby and Clem- Danny?

I think that the girl, bottom row, fifth from the left is Liz.

First time I've ever seen a picture of Sandy with glasses.

Matt,
I hope you're going to cheat and give us a key when the thread plays out.

are they the ugliest,just down right scariest bunch? they look so GREASED out.the mugshots now look so dated obviously 42 years after, but even back then when first taken the pics have a Ma Barker, Jesse Jamesesque feel to them.

That's too much work for one guy. Help me out!

Which time did Ella get arrested? She left before the raids and she wasn't one of the ones in Mendocino, right?

Hey Matt, I've got more stuff I'm trying to email, but they keep being returned. The image size isn't to large, don't know what to do. Started last night.

I think Ella Jo was arrested when the bus was stuck in the creek and the girls were in the wooded area nude.

Matt I dont think that's TJ. But 4g definitely is. And I think that is Sandy next to him. And 4d id Nancy, next to Schram. And thanks Ken for the clarity.

Matt/Liz and anyone else up in the Northeast..

Stay safe, and be careful with this storm...

living down here in S. Fl- I can tell you from experience.... its worth it to be prepared

Weirdest episode of Celebrity Squares ever ! And to think that Blackie was gonna hand over world-power to these mugs. Jeez

Matt said... That's too much work for one guy. Help me out!

I'll try but, if you didn't save a copy of the names when you got the pictures, there could be a problem.

If 1c is Decarlo, then could 3b be Harold True??? Was he ever arrested in something related to the family?

For the most part ugly, ugly people.

I think you are right Suze...

When did he get arrested related to CM???

Suze, I also think you are correct. I've changed my mind, that's Harold True. He was arrested in connection with TLB during Bugliosi's purges. He arrested everyone he could think of & threatened them hoping to get information and witnesses.

That would make TJ 4G - as biglittlepatty says.

Who's the lil' cutie second row down next to horseface? She'd be worth doing some jail time for.

I got a lot, but cheated on a couple:

Who's the lil' cutie second row down next to horseface?

She is cute but, I'd pass on the jail time. The next one over looks like Sherry Cooper. She's cute too.

I have plugged this blog a few times- so pardon me just once to mention another- as it is related...

over at L/S he has a interview tape posted currently of a women who calls Harold True and talks to him for about 9 min..

it is the funniest thing on this subject I have ever heard... I would do it no justice to list quotes...

suffice to say- I had to listen to it several times as i kept laughing over him answering her questions in the most belligerent and stoned manner in which you could ever imagine..

he also made quite a few interesting quotes about the Labiancas and the family which may or may not be true..

but were news to me

I have never seen Mother Mary looking more rancid then she does in that mugshot.

Man......what a gnarly bunch of riff-raff.
I don't see anything resembling what might be called a hippie.
These people look more like alcoholic/drug addicted street people or carnies.

I agree Matt. 3b is definitely H. True. I do see alot of faces in here I have never seen before though. Do you guys agree with me about 4f being Sandy? I swear it's her, but I have been known to be wrong...

Wait a minute...just realized somethin'...which mug shot of Linda K. is this? I have only seen the one where she is smiling and looking slightly upwards...the famous one. So what the hell is this one?

I DID NOT CHEAT!

Row 6- HIPPIE CHICK,Vance, Paul, That dude named Frank who posts on the blogs ( yes i know the avatar Frank uses is really charlie from a movie but he still looks like Frank)
?,
me Eviliz, ?, Zero

We know about the main players. I wonder what happened to all the others that were in the family. There were a lot! I know there is no real answer to this, but that's what I think when I look at this image.

I don't think 4F is Cappy or Sandy or anyone we know. I have seen that shot of Linda before, but I can't tell you where.

I also wonder what happened to the "lesser" family members. I wish one of them would speak up, time is running out.

Sandy is wearing glasses and Cappy is wearing the hat. I'd say it's Kitty because there isn't another image that could be Kitty.

biglittlepatty said...
I agree Matt. 3b is definitely H. True. I do see alot of faces in here I have never seen before though. Do you guys agree with me about 4f being Sandy?

Row 6- HIPPIE CHICK,Vance, Paul, That dude named Frank who posts on the blogs ( yes i know the avatar Frank uses is really charlie from a movie but he still looks like Frank)

Not me! And the pic I use is not Charlie either ...

Does whoever posted these pics have the answers? If not, a lot of these are on MT's website ..

I posted them, Frank. I don't have the answers but they can easily be looked-up.

I answered completely by memory and was wrong on a couple of them. I just thought it would be a fun exercise. Looks like a lot agree.

My fascination with the subject has more to do with the Family than CM or the motive so I had a blast trying to guess.

Yes, it was fun, and much appreciated.

I can name them all. These came from my personal mug shot collection with all named.
Trivia: One man's name is Charles Beard, aliases Charles A Manson and Charles A Watson.

Oh, and that one everyone thinks is Zero, is not. It's Robert Earl Murray. Unless that was Zero's alias at the time.
http://imageshack.us/photo/my-images/685/unled1qwj.jpg/

Scab,
Would you please put up all of the correct names. I can't get half of them.

I posted them, Frank. I don't have the answers but they can easily be looked-up.

Matt,
It was about as much fun a person can have and still be legal. Hopefully, Scabb will put up all of the correct answers.

How did we get Zero before this?

Scab,
Thank you very much.

So that thing next to Squeaky goes by the name of Laura Shepard. Move over Mary, she has taken your crown as the ugliest Manson girl.

Does anyone know anything about Robert Earl Murray? I ask because his arrest record lists his home address as being in the same town I come from. I can't find any info on him at all, anywhere.

My girlfriend married TJ Walleman around 1971/1972 ish. He was a really good looking guy then (an as_hole, but good looking

Do you have a picture of Rocky? He was my first boyfriend...

I am sorry. I mis-spoke. My friend married Patrick Walleman, not TJ Walleman. She met Patrick at the Spahn ranch

Too young, shoot me an email. We'd like to chat with you.

I know Laura Sheppard and these comments are so hurtful. At 63 years old, she still suffers from PTSD over her time with the family and has not been able to return to a normal life. When she returned home soon after this photo was taken, she weighed 98 lbs at 5ft 8. She was completely emaciated and pregnant (baby did not survive). The romanticism of this man and the family is horrifying, and its recent reglorification, unsettling.

Hi Just Me. What "glorification" are you talking about?

Just Me, A few years ago, around 2006, when Jane Doe #59's case was reopened law enforcement asked a number of then Manson related sites if they had any idea where Laura Sheppard was or if that was even her true name as they were unable to find her. It was thought that she might be Jane Doe #59. As far as I know no one was able to give LE any leads. Did LE ever make contact with Laura? Please contact Matt or myself via the email addresses in the upper right of the home page.

Matt said...
Hi Just Me. What "glorification" are you talking about?

They are probably referring to all the websites and fandom devoted to Manson being innocent (and a prophet), to all the Manson-related merchandise, the admiration he and the family still bizarrely receive from some quarters.

If you don't think such glorification has occurred, then I don't know what to tell you.