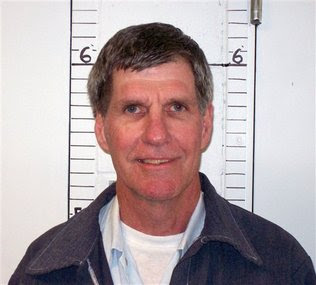 By DON THOMPSON , Associated Press
Published: Tuesday, Nov. 15, 2011 - 11:24 pm
SACRAMENTO, Calif. -- The self-described right-hand man of cult leader Charles Manson, who was convicted of orchestrating the Tate-LaBianca slayings 42 years ago, was denied parole from a California prison Wednesday for the 14th time.

Charles "Tex" Watson, 65, was ordered to continue serving his life sentence after a hearing at Mule Creek State Prison in Ione, in the Sierra foothills 50 miles southeast of Sacramento.
A two-member panel of the California Board of Parole Hearings ruled that he cannot seek a new parole hearing for another five years, said Terry Thornton, a spokeswoman for the California Department of Corrections and Rehabilitation.

Four relatives of Watson's victims asked that his parole be denied for killing actress Sharon Tate, who was eight months pregnant, and four others at her Beverly Hills home on Aug. 9, 1969. The next night, he helped kill grocery owners Leno and Rosemary LaBianca.

"There's no question these were some of the most horrific crimes in California history in terms of the brutality, the multiple stab wounds, the gunshots, the large number of victims over a two-day period," Los Angeles County Deputy District Attorney Patrick Sequeira said. "For a group of people to just slaughter strangers in hopes of igniting a race war is extremely horrifying."
Watson's attorney, Cheryl Montgomery, did not return repeated telephone messages.

Watson read a statement but did not answer questions from the parole officials during the nearly five-hour hearing, Sequeira said, leaving them without enough information to decide if he is ready to be released.

Sequeira said he believes Watson still is a public safety risk because "he's a man who is at the center of the Manson family. He was aware of all the crimes that all the Manson family members were involved in."

Watson married and divorced in prison and has four children from conjugal visits, but his family did not respond to a request for comment that was left through the website that promotes Watson's prison ministry, http://www.aboundinglove.org.

The website says he was raised in Copeville, Texas, north of Dallas, and headed to California in 1967 after dropping out of college. A brief biographical sketch on the site said Watson believed Manson "offered utopia, but in reality, he had a destructive world view, which Charles ended up believing in and acting upon. His participation in the 1969 Manson murders is a part of history that he deeply regrets."

A book he wrote while in prison is titled, "Manson's Right-Hand Man Speaks Out!" In the past, Watson has argued that he is a changed man who has been a model prisoner and no longer is a danger to the public.

He did not attend his last parole hearing in 2006 but was portrayed in a psychiatric evaluation at the time as "a very devout fundamentalist Christian ... a young, naive and gullible man (who) got into drugs and bizarre company without appreciating the deviance of the company he was keeping."

Anthony DiMaria, a nephew of victim Jay Sebring, contested that view of Watson and other Manson disciples.

"They've often been portrayed as these victims of Manson, and they are killers. They're mass murderers," DiMaria said in a telephone interview before the hearing.

He attended the hearing with his mother and sister.

Debra Tate also spoke on behalf of her late sister, Sharon, who at the time was married to film director Roman Polanski.

Watson was convicted in a separate trial after Manson and three female followers were found guilty of the seven murders. Their death sentences were commuted to life when the U.S. Supreme Court briefly outlawed the death penalty in 1972.

DiMaria said his mother has considered it her mission to speak out on behalf of her brother.
"I know that our family, myself included, feel no hatred, anger or vengeance toward them. We actually go out of love for the victims, and we also go out of justice. This is calculated, cold-blooded mass murder in which bodies were desecrated," DiMaria said. "We want to bring the memories of the victims into the room as the commissioners deliberate on whether to parole the inmate."

I know I'll get a lot of shit for this, but a significant part of me thinks that they should be released. Of course this will never happen because of their association to Manson and the the infamy of the murders. Also, if they were released there would be mass protests and they themselves would be in serious danger.

Yet, this is my two cents/sense:
They are not a danger to society. Give me a fucking break. Like they're really going to run off and call up Manson and get the rest of the family together for some trippin/orgies/and stabbings? Please. To begin with, they're NOT the same people they were when they were 19, 20, 21, etc. They are qualified for senior citizen discounts now, for God's sake. Also, every move they make will be watched like a hawk by the media and general public so that in and of itself would keep them in checks and balances if they were indeed up to no good (which I highly doubt they would be). Gosh, I look back at stuff I did when I was 19, 20, 21 and am so glad that I didn't suffer serious ramifications that could impede on me future. The parole board needs to stop saying that because they are a "threat to society" they cannot be released. They are not a threat to society anymore. Period. Come up with another excuse, parole board.

Secondly, it's the notoriety of these crimes that keeps the Family in jail, not the crimes itself. Like Leslie still in jail for stabbing someone in the back that might have been dead already? In jail for 40+ years? Most people are released 5-10 years. Also, it's because of WHO they murdered. Sharon Tate and crew were young, beautiful, wealthy, famous-- the quintessential American dream. If the Family killed some random dude nobody would care as much (Gary Hinman, anybody? He's almost never mentioned in historical commentary).

It's all so politically biased and charged that it's just not fair anymore. They're talking about justice, well isn't jail supposed to be about reform? It's supposed to make people reflect on what they did, better themselves, and move on. The family members have almost clean prison records and are model prisoners. Why even give them parole hearings if it's DOA from the start?

Not to mention the "political prisoner" argument. No parole board member wants to be tagged as the one who let Tex Watson out. They might somehow lose their job. That's POLITICS. It shouldn't work that way.

It is true that the crimes were gruesome and horrible beyond description. But, 42 years is long enough for ANY crime.

Can't think of a single reason why a guilty man sentenced to death should ever be released from prison.

I know I'll get a lot of shit for this, but a significant part of me thinks that they should be released.

My 75 cents-I think Pat,Tex and Susan(if she lived )should be grateful they were spared death.

It is not a matter of if they can pose a danger to society or the "political prisoners" b.s.
They are murderers plain and simple.
You can't just go out torturing and killing folks because they pissed off your guru.
It was not like the Family lost anything either.
They invested nothing but a little time recording music, which I am sure they enjoyed. They lost no money or drugs.

I don't buy the "Gary Hinman burned us on drugs and/or money" excuse either.
There was no drug manufacturing going on at Gary's. Don't you think it would of been in at least one police report. Come on.

I also think who ever else in the Family knew about any thing,
pre or post murder- depending on just how much they knew, should bee punished. There has to be a hindering prosecution,conspiracy or some charge for that.
A tribe of people just going about their daily business knowing so many people were senselessly killed. How can someone live with themself?

If Brenda and Sandy were convicted for hindering prosecution on TOTL-Zero and the Willett's would be alive today.

Poor Sharon.
Can you imagine what was going on in her head? Knowing you are about to be brutally stabbed to death after just watching it happen to your friends?

All the thoughts she was trying to process. Thinking amongst other things that she will never see or hold her child. Should I have married Jay instead of Roman?
Talk about anxiety.

Do you think if WE here were not interested in the case the way WE all are, maybe our opinions of letting certain people out of prison
would be different.
I am going to have some Lucky Charms now.

Assuming that Tex is guilty of what he's been convicted of, I wish him the best but, not the freedom to become a killing machine again.

The best predictor of an individual's future behavior is his/her past history.

"It is true that the crimes were gruesome and horrible beyond description. But, 42 years is long enough for ANY crime."

But would you feel this way if it had been YOUR father/mother/sister/brother/wife who'd been butchered? If you had been the one to sit through the agonizing days in court while these little animals laughed about it and thumbed their noses at the world?

Surf Bat, of course I'd feel different if it were my family. It goes without saying.

With the exception of autocratic regimes like China and Iran, we have the worst record in crime & punishment. In most European countries the longest possible sentence for ANYTHING is 30 years. There is no "life without" or "death".

My point is that at 65 (after 42 years of incarceration) you have paid in full for any crime you committed at age 21.

I think it is an outrage that people now days argue that the murderers themselves have become victims, because they have been in prison to long.

It seems that there is a good percentage of people on these blogs that try to argue their point, by making the comparison that other murderers are getting out in far less time.

This process of thinking is nothing but absurdly frightening! The outrage should be that there are criminals getting out of prison, without serving a just sentence. Not that poor Tex, Pat, Leslie, Susan and even Charlie are victims because others that have committed similar crimes are getting out far sooner.

These people were sentenced to death, and that is what they deserved for their actions. They are lucky for every breath they get to take.