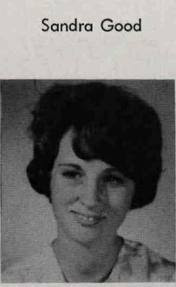 Two other yearbook photos of Sandy. I am not sure of the schools or years. I borrowed these from our friends over at the Helter Skelter forum.
http://www.helterskelterforum.com/ 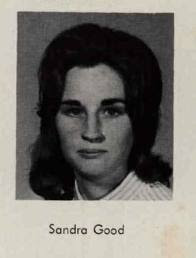 is that really her? doesn't look right. Maybe she got braces later.

I like the looks of the other Sandy better:)

I think I remember these pictures being posted somewhere before and were debunked.

Actually, if you compare the two school pictures to the one with Joel, they could pass as the same person. Not sure though.

Yes, Patty wonders about the provenance. Interesting though, if you compare each of these to the one of her with Joel Pugh above, each individual feature on its own (except for the teeth: Did she have braces ever, does anyone know?) could be right. The eyebrows, alone. Or the nose, alone. If these were taken when she was very young (like, 12 or 13) and especially since we know she was a sickly child who had to stay indoors a lot, maybe her red hair photographed more brunette.

Still, Patty does not think these are her.

Not her, no question.

No 'Deer in the Headlights' look that Good perpetually had.