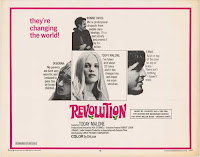 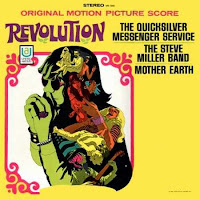 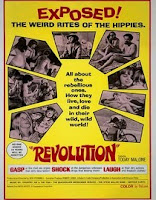 Patty supposes she might unofficially be starting an Eviliz.com "Netflix Companion:" recently she discussed "Wild in the Streets" and "Jesus Christ Superstar;" today she will touch on a little gem of a documentary produced in the Haight-Ashbury and released in 1968 that is called quite simply, "Revolution!"

What makes this movie most relevant to Manson researchers is its period look inside the Haight-Ashbury Free Clinic at 558 Clayton Street (You can see a photo of the Free Clinic TODAY on Eviliz.com here:


At or around minute 36, the interior of the two front rooms full of medical personnel and hippies is fully visible for several minutes. From a victorian bay window, you can see a short, waif-like little man pacing down on the corner...
...could it be???
Nah...

Anyhoo. You may remember that Dr. David E. Smith was the author of a scholarly paper on the Family entitled "The Group Marriage Commune: A Case Study" in the September, 1970 Journal of Psychedelic Drugs. Dr. Smith is also the founder of the free clinic, and also of Rock Med. Surely, Dr. Smith must have known Ines Folger quite well, wouldn't you think? He has a cameo of sorts at or about minute 18 as the camera pans a public health poster that reads as follows:

STP gets mentioned more than once before the credits roll. Patty never realized before how available it must have been back then. For those of you unfamiliar, STP (aka DOM, aka 2,5-Dimethoxy-4-methylamphetamine) is a hallucinogenic characterized by vibrations, distortions, increased sexual sensation and a rise in blood pressure.

One final though before Patty ceases to bore you with her background research...Today. Today Malone is the sunny blonde star who sells dope and booklets on "How To Roll The Perfect Joint" to passers-by: 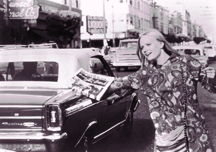 In the movie, Today says that she took her name because, you know, it's beautiful. "Like, totally NOW." Heard this one before? From Scientology? Or The Process? Or one of the groups mentioned in this film like The Hip Job Co-Op, The Diggers, The Krishna Temple, The Love Vortex or the Orifice? Patty wonders if Today ever met The Family? She looks just like one of the girls but more conventionally "pretty." Here, just to stay kind of on topic, Patty presents you with Today yesterday and Today today: 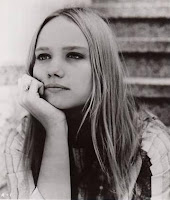 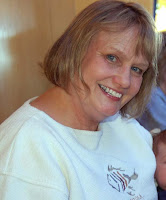 And, Dr. Smith yesterday and today:

Patty did a little more reading about STP and the summer of '67. Apparently, you only need 5mcg of STP to trip whereas you need 20mcg of LSD. A lot of hippies took way too muc because of this confusion, and because STP comes on a lot more slowly than LSD, many thought they had not ingested enough and took more. As such, the emergency department at San Francisco General was full of people on bum trips that summer. One commenter on line remembers "After that, you couldn't give the stuff away."

It doesn't look like Malone has missed too many meals since then.

Maybe she got the munchie's from all the joint rollin'

Patty, is it available, this movie?

Isn't the Today of Today the Yesterday of Tomorrow?

Hello Fi, yes, Revolution is currently streamable on Netflix. Do you have that in the UK? Or maybe a similar service?

Dilligaf said...
Isn't the Today of Today the Yesterday of Tomorrow?

It ls now Jan 4, 2012 and I recently saw the movie on Netflix. Today mentions her love for
Twinkies and other sweets. Over the years they'll add on the pounds.

A little Googling tells me that she quit smoking grass in the early 70's and is a nurse, and a grandma.