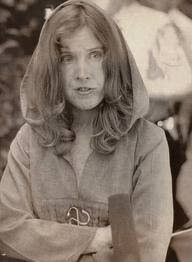 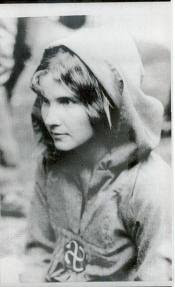 Someone asked when did Sandy turn her "X" into a swastica.
I could not find a picture of that but did find these. Lovely swatica robes.

Someone asked when did Sandy turn her "X" into a swastica.

I believe that was me, who said that. That was my way of saying that I thought the author was wrong about the swastika. I don't think she ever had one on her head either.

Funny. Sandy was one of he most devoted but did not carve the swastika. Neither was she made to have her baby on the back ranch with Clem as midwife, she went to the hospital. Seems she got to do things that the other girls did not...why?

Charlie was probably afraid of her.

CM didnt have as much control as the myth suggests. The Circle was fluid people moved in and out all of the time. It was only after the murders began that the situation got all controlling and the usual drifting stopped.

Does she do that crazy face on purpose?
People like her are more of a danger to the environment than a help. Who could want to be associated with her? What I think is really interesting is how amazingly rude she is. On radio interviews, she addresses the interviewer as "woman' and doesn't display even a vestige of basic manners. The ATWA website stated that "we are not here to make friends" and a bunch of other aggressive statements, without so much as a 'hi' or 'thank you'

It's so weird I wondered if it could be her early training being totally rejected. She was from a high-class family and she always sits like a lady, never sprawled on the ground. Maybe she is deliberately rude. Lynn was always sweet and pleasant to the press.