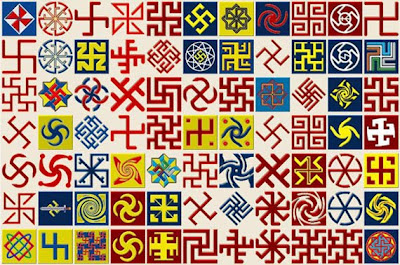 Have you ever wondered what the swastika symbol stands for? Did you know that the swastika has been found on artifacts that are over 3000 years old? According to the American-Israeli , the word swastika was used to describe the hooked cross. Would you be surprised to learn that is a symbol of being fortunate, not Anti-Semitism? In some cultures, they actually turned the symbol clockwise or added something to it. Before the symbols meaning was changed, the swastika was used to represent "life, sun, power, strength, and good luck." Many cultures consider the emblem to be a sacred part of their lives and faith.

The swastika is mostly reported to be 3,000 years old, but swastikas have been found as far back as 6,000+ years. A lot of people do not know that Arizona road signs used to have swastikas on them until the early-mid 30's.
I do not know how true this is, but Charlie told me that Jan Holstrom tried to burn the swastika off his head- that's why he doused him with the thinner. Charlie said that Jan said the swastika was a Hindu (Jan was Krishna, a sect of Hinduism) symbol (and it is). At the time Manson was hanging with a lot of Native Americans and they also use the swastika and Manson told the Natives the swastika was the Native variant. Apparently, this made Jan mad and so he tried to get rid of it. However, the story of his burning changes every time he talks about it. Jan simply said God told him to burn Manson. There is a photo of Linda Kasabian sitting with a man next to her with a guitar (hard to tell who it is) and there's an Aztec swastika and fret pattern behind her on the wall.

I went on a tour of a hotel in French Lick, Indiana in 2001 (or 2002)called West Baden. It had originally been a spa and hotel, then eventually taken over by a Jesuit order. Its a resort and casino today. In some of the hotel's architecture there were swastikas. An elderly lady on the tour said that "in her day" the symbol was the joining of 4 'L's that stood for Life, Love, Liberty, and Longevity. She had a quilt given to her before WWII at her wedding with these symbols, and said that it was a typical wedding quilt pattern at the time. During the war she had it hanging on her clothes line and a local cop told her he never wanted to see it again and she'd better burn it, so she hid it. Be interesting to know if it's still around.

There was a program on about Hitler a couple of nights ago. I just happened to surf through when they were talking about the swastika. If I remember correctly, Hitler said he chose it for the Nazi flag because it stood for the Arian.

On a little different note, my family has had an earthen ware pitcher with a large swastika on it since before the Nazi's came to power. I was told that it was an Indian peace symbol.

The U.S. was using the Swastika as decoration in 1907. During its early years the United States Bureau of Reclamation used the swastika for its symbol.

We go to the Colorado River in Yuma, AZ to boat and fish. There is an old bridge that was built by the U.S. Reclamation Service in 1907 that has them all over it.

Here is a link about it

Candy and Nuts,
I believe it was the same program. I had trouble remembering everything that was said. I usually do.

you see it all over Asia

Hitler is said to have reversed the symbol: it is even said that this indicates his involvment in occult societies. I don't think Hitler practiced black magic, but several senior Nazis, not least Himmler, were very into all that, hence all the mystic aspect of Nazism, that made it so cult-like.