If you have ever ridden Amtrak between LA and Ventura counties, then you have passed through, east to west, tunnels 26, 27 and 28 near Chatsworth. Below is an image of the western end of tunnel 28: 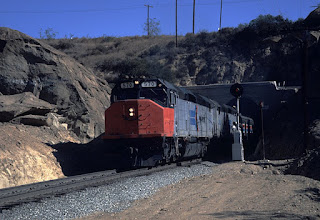 The tunnel is just south of the famous peaks that serve as a backdrop for the Spahn Ranch in so many classic photos, about a mile in all from George's house on Santa Susanna Pass Road. Do you recognize them here?: 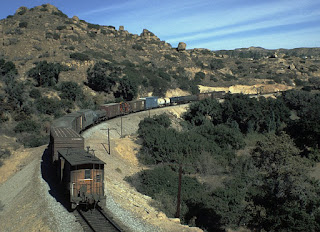 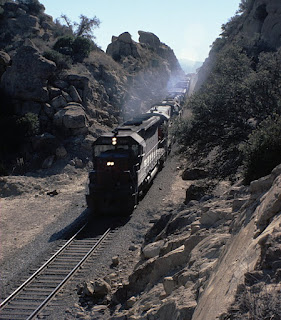 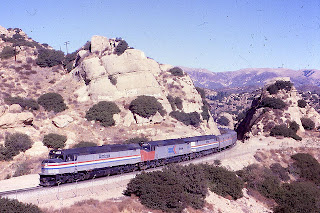 Here also is an aerial view courtesy of Mapquest. The train tracks are the sloping line at the bottom of the image, while George's House sat near the top by what is now the baseball diamond and its complex: 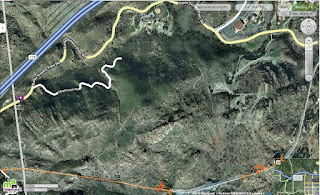 In 1990, 21 year old UCLA college student Ronald S. Baker was murdered by his roommates in one of the tunnels (thank you, TooCrowded, for the link). His story was highlighted on Nightline and you can view it here:

In September of 2008, you may remember that Amtrak derailed near Chatsworth because the engineer was busy texting on his cell phone and missed a red light. It was "the deadliest crash in 15 years," 25 souls in all perished. You can read all about it here. 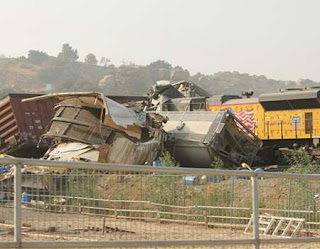 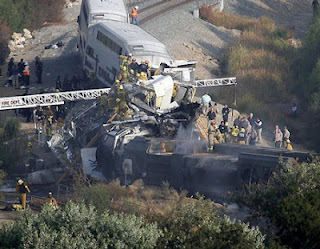 In 2009, one of five people (a woman) walking in tunnel 27 died after being struck on the tracks. You can read about it here. 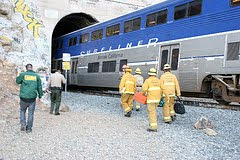 Are these occurrences normal: just another day in LA County? or is there some kind of oo-EE-oo going on here?

Umm....can you walk inside those tunnels and not be hit by a train if one happens to come by?

I was thinking the same thing. Like the unfortunate accident where somebody falls on a knife. Four times.

Apparently it was a whole family in the tunnel. Mom got caught by some equipment sticking out...sad.

Can't say the idea of spelunking a live train tunnel ever came up in discussion of what we might do on Saturday as a family. I guess we're weird that way.

Keep in mind, that train is FAST. You hear the rails humming, GET OFF THE TRACK. Within 5 seconds it will be there.

There was a college student murdered by two of his "friends" in the middle of one of those tunnels. I think the kid was stabbed or bludgeoned to death by the other two. I believe I learned this on Dateline, and hadn't heard about the case before. I think the murder happened in the last 5-10 years. There's some Manson stuff spraypainted above the tunnel entrance.

The "Manson Tunnel" murder was actually in June of 1990, and his friend/roommate was convicted in 1996. Here is the youtube clip: http://www.youtube.com/watch?v=_Lvp8Atoq04

Thank you Crowded, Patty could not remember that one but thought there was something else from the "old days."

Patty used to travel this line regularly in the late 1980s between home and University. She used to love the otherworldly feeling of emerging from tunnel 28 into that weird landscape. She remembers that her soundtrack would usually be Zeppelin's Physical Graffitti, Pixie's Bossa Nova or somesuch on her battery-operated portable disc player. The moaning and creaking of the train through this landscape would sometimes sound like screams or howls which she could hear even with her volume turned up to 11.

An eerie and magical place. Yessir.

Wasn't Shorty's body buried by the train tracks near Spahns?