And now, for some comic relief, Patty gives you Farflung's latest creative endeavor.
We love you, Farf! 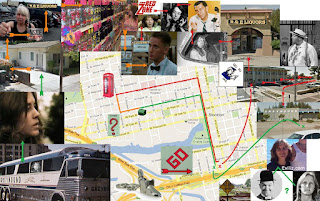 Hi Patty,
Taking a cue from your awe inspiring mapping of the Stockton crimes, I created either a ‘Squeaky Walking Tour Map of Stockton’ or a Manson centric board game called ‘The Red Zone’.  Wanna play?  Just like being in the family, you now have no choice so follow along.
You start by arriving via Greyhound bus at the terminal located on Center Street.  You then proceed to walk the sixteen blocks to the Flora Street home because your friend was too tired and driving to the station to pick you up, would be a hassle.
The house is a flurry of activity with frantic ad hoc carpentry (shovel handle sawing), gardening and a crying baby beginning to grate your normally steady nerves.  Perhaps a walk to get some fresh air to try and clear your mind would be in order.  Roll the dice of life and take a chance on what will be your destiny.
After nearly six blocks, you realize this isn’t working and notice there is a market on the corner just ahead.  This would be a discreet place to purchase a couple items which would take the edge off of being ignored by your friend Brenda in the form of a package of tampons and a fifth of vodka to soak them in.
The cashier asks if you would like some modeling glue or spray paint to go with your purchase and you enter…… ‘The RED Zone’.
That’s enough!  You grab the first payphone and call those ingrates and demand a ride back because you’re mad as hell and aren’t going to take it anymore.  The phone is answered and before thinking, you demand a ride from the liquor store in a move so ironic, that Otis Campbell feels amateurish.
From the corner market to the slammer on Market Street, you are finally given that ride which you have been denied since landing on the sovereign soil of Stockton.  Sure you’ll spend and unknown amount of time in a lesbian fuelled container of hot messes, and charged with murder, but it’s worth it.
The game ends across the street from where it all began and where you will say farewell to Stockton and what will later be known as ‘The Lost Weekend’.  You venture to other destinations in life while gleaning some satisfaction knowing that you weren’t able to tell Brenda, that it was discovered she is the lovechild of Stan Laurel and Delores Taylor.
Sincerely, Farf

I remember the time Otis rode a cow into the courthouse, "food and water for my men and horses"!!

FARF- I knew when patty shared this with me it would be a great comical post. You rock Farf!

It’s extremely hard for me to believe that Squeaky happened into that Flora Street home during the time window of Lauren’s murder; and knew nothing. No statute of limitations on filing murder charges and that would be a great ‘ace up the sleeve’ for the cops to keep Red on the low down.

Pitman is the only survivor that can truly recall Squeaky’s ‘involvement’ and that would be enough to keep me up at night. You know, waiting for that call from Brenda where she declares she is now haunted by her past and needs to atone for her lies and deception before God. Or ‘someone’ could send a series of Western Union money orders, totaling $10,000, which will fund therapy so Brenda can forget all about Stockton…… for a while.