Sorry Anon8252, the steamer trunks were NOT full of MDA

There's been speculation here about the anonymous "Family Member" (Anon8252) who was in Star City Radio's chat on Wednesday night.

Setting aside the obvious problem with the dates and having details on Kasabian who she could not have met if she left Spahn for good on May 20, 1969 (Linda didn't arrive until later) we'd like to address the part about Sharon's steamer trunks shipped from Europe being full of MDA.

We do believe that drugs played a part in the Cielo murders. Do we think that there were drugs in the 2 steamer trunks? We would say that with a 95% certainty that there were no drugs in Sharon's trunks. It makes absolutely no sense.

Below is the paperwork for the "drug" trunks. Notice that they were shipped on July 17, 1969 and then didn't arrive in LA until August 8. It seems to us that there would be more of a rush to get these "drug filled" trunks to LA.

You would have a very hard time convincing us that Roman Polanski, at the height of his directing career - fresh off winning Academy awards for Rosemary's Baby and just signing the biggest deal of his career to direct 3 films for a huge amount of money (at the time) would risk it all to ship drugs in a trunk that is so easily traced not only FROM him (albeit his secretary at Cadre) but TO him at his current address in the US.

Also, in these types of trunks there is no hidden compartment or even a lining in these trunks to hide drugs in.

Here at Eviliz, we think Anon8252 was giving nothing more than the regurgitation of a combination of long told rumors. There's not a single thing that he/she said that is new information.

MDA is interesting but this was a drug that was not even really on the market yet but still in the pharmaceutical stages in Canada - not being smuggled from London. 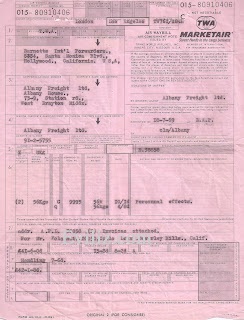 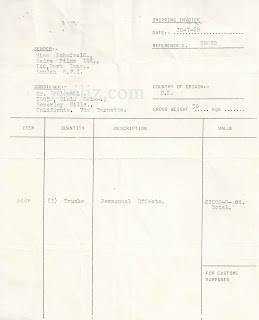 Thanks to Tayyarrah for the documents.

Last night she said that Sharon Tate wasn't at El Coyote the night of the murders, there is a vid of the waitress that seen Sharon Tate that night with her big pregnant belly.

Who that person is, what she says, who she knows, etc. I have no idea. Like many other things about this case, it's hard to tell who is telling the truth and who isn't.

This will probably be my last post on the subject of "Anon 8252".

Absolutely. Call a spade a spade. This stuff is difficult enough to get to the bottom of without some pathetic, mentally ill attention seeker pretending to be a former Family member and mucking up reality.

You guys obviously researched the facts and helped to lay waste to this fraud.

You make very fair points. I don't believe that MDA was in the trunks and other parts of the comments made don't ring true with me either. Other things do ring true.

I would say that the story of someone being a casual member before the murders occurred drifting in and then out of the ranch and later coming back while it was in the news is possible. She said before the murders occurred she didn't really didn't know any of the names all that well. Which makes sense, why would they stand out at the time. And I don't recall her saying she knew Linda at that time.
What you could have here is someone who knows a some of the players and has heard the stories second or third hand. For her, she feels them to be true as that was how it was told to her by people she knows.
Of course, at the time of the murders occurred Tex could have seen those trunks and assumed the drugs were in there. He didn't know how the drugs were to arrive. Folks do smuggle things. He didn't have time to puzzle out the liklihood of that being false. Wasn't he running about 30 IQ points under due to that Beladona drug intake? That story may have been passed along as 'fact' to the other members over time and become established lore.
What you may have here is that different folks have different parts of the story. Some of it correct, and come of it incorrect. But it is important that folks bring forward what they know.
the Anon also said she had other things like stuff from some of the members ie letters. Show one of them to Brian and then you'll gain credibility.
Of course, it could all be BS. For example, the issue with her saying Sharon didn't go to El Coyote. The first instinct is to say, 'that's bs, this person is a fake' anyone who has read any of the books or documentaries knows that she went to El Coyote. (although the waitress initially didn't recall the pregnant Sharon Tate or guests that night--how many pregnant movie stars come to your table and you not recall the next day...)
This person put it out that her understanding is that she didn't go. Doesn't jibe with what I know to be true ie Sharon was at the restaurant but it would jibe with someone who's involvement with the case was more along the stories heard from other members and not getting it from books like Helter Skelter. Getting that point wrong doesn't serve any other story line I know of. So if I was to serve out disinformation I would not get that point wrong.
The biggest issue I have is that she won't contact Brian. That's a sore point.

I was under the impression that MDA was legal, at the time. Was there a need to smuggle it?

@ johnnyseattle - Brian does a nice job. He also tries hard to bring the various forum dwellers together to listen and interact. He can't help who shows up, though. You are correct, a little proof from Anon would go a long way. So far though the Eviliz Fact Checker says no.

MDA was made illegal in 1970, which means by 1969 it was a big enough problem for the government to move on. This notion that it was only available from Canada is false.

matt
did you agree with anything that the anon posted in the discussion room?

Johnny, any one of us with a high enough level of knowledge of this subject matter can appear in a chat room and convince others that we were MF members if we decided to do do. This person in my opinion is fill of bologna. To discuss what they got right is to me like discussing what a college grad got right in a 5th grade classroom.

matt
yeah, that's pretty obvious and kinda not what i meant.

what i WAS curious about was what you agreed with regarding the anon's assertions.

matt
i wasn't being snarky, i just said don't bother.
the problem with reading someone else's comments is that it can be taken different ways.

i was not going snarky, i just said don't bother. i understood your view it was a waste of time and was moving on.

Recreational psychedelic drug use started with doctors in the 50's, spread to colleges in the early sixties, and mainstream by the mid sixties. There are literally thousands of different psychedelic drugs. The government bans the "popular" ones. In 1966 LSD is banned, and by 1970 MDA is banned.
MDA was not as readily available as LSD, but you didn't need to go Canada to get it.

This is from PIHKAL by Alexander Shulgin
"MDA was also one of the major drugs that was being popularly used in the late 1960's when the psychedelic concept exploded on the public scene. MDA was called the "hug-drug" and was said to stand for Mellow Drug of America. There was no difficulty in obtaining unending quantities of it, as it was available as a research chemical from several scientific supply houses and was sold inexpensively under its chemical name. "

I always thought the waitress never said she saw Sharon at El Coyote until much later? That to me sounds like it was not honesty...
As for Polanski allowing MDA being sent to his home, I don't think it was MDA... but at the same time, why would Polanski allow a deadbeat like Frykowski into his home? A known drug user/abuser and seller as well as a leech. Same goes for Sebring who was a user and seller, and was all but bankrupt (according to the Tate homicide report).
There's no doubt in my mind that Polanski knew they sold and consumed "in large quantities." This is not something a respectable man would allow into the home of his pregnant wife. Definitely not something he'd want the media/public to know!

Also, I don't believe for a SECOND that Tex's IQ plummeted. He was in the middle of an act. Even his ex from Texas, who he went back to after the murders, stated he was normal in every sense of the word (aside from anger). I find it amazing that people still believe Tex's BS.

Here is an MDA timeline
http://www.erowid.org/chemicals/mda/mda_timeline.php

The reason Roman let these people stay in his home is quite simple, they were his friends. And this is Hollywood we're talking about, you should not look for respectable men there.

AC, I didn't mean to imply that people weren't having fun with these substances until the 50's, but I'm saying that is when it started picking up steam.

lots of good discussion on this thread over on brian's show

Didnt the autopsy prove they were at El Coyote? or just that they had very bland mexican food in their stomachs?

Which Manson member would you send to Guantanmo for enhanced interrogation if you could? I would send Stabby Tex, I think he has the most information on all unresolved issues. And he deserves to be waterboarded!!

Old J.C.,
I've long thought Tex might have been acting too. Where did you find the informarion from his girlfriend? I've never seen it.

Jesse2112 said:
Didnt the autopsy prove they were at El Coyote? or just that they had very bland mexican food in their stomachs?

I've been looking to find out just that. I haven't read all the pages of the autopsy, but it's not like they couldn't have eaten somewhere else. The waitress doesn't remember them, but there was a reservation under the name Sebring for that night(forgive me, I can't remember where I read that)but that doesn't mean they were there. I can make a reservation and not show up just as easy as anyone, and the fact that the waitress doesn't remember a VERY pregnant woman who she served seems a little strange.

You're saying a man with a great directing career who had sex with a young girl wouldn't do something to damage his reputation?

daniel I'm saying it's unlikely that given the other factors I mentioned he would ship steamer trunks full of drugs (the slow way) given the fact that he didn't need the money. He might have been self-destructive but he wasn't crazy.