A Short Story by Farf 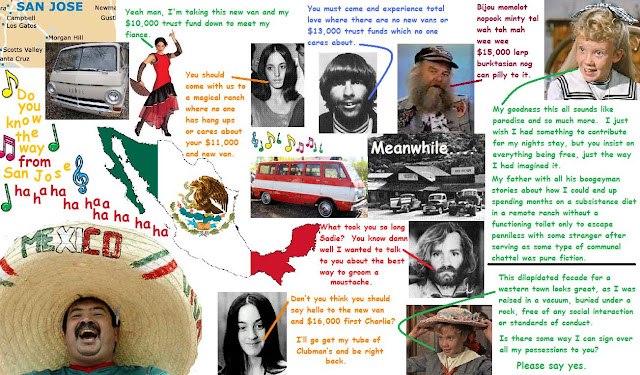 I call this: ‘The Juanita Story’ or ‘How the Wildebush Picked a Berry’

The number of variations to Manson Family tales appears to be directly proportional to the number of stories at any given time.  This assumes that one can pick a subject obscure enough to avoid any of the typically associated wrath and venom when the scripture dare be questioned.

So enter an obscure member known generally as Juanita who picked up one, three or four hitch-hikers around San Jose, California.  Traditional wisdom would not normally have a single woman picking up several men on a roadside but I’ve been told this was common practice.  I don’t have a similar recollection, but that answer appears to make people happy so I’ll go along with it.

Apparently Juanita was on some type of road trip in her year old van.  She picks up some family members which have included Tex Watson, Susan Atkins, TJ Walleman or just Paul Watkins if you choose to believe his version of the story.  I like more characters, so I’m going with a butt load of people in the van instead of one.  Even though Paul’s reluctant manwhoring himself to Juanita in order to pay the tax lien, and save the ranch is pretty salacious and funny.  I say that because by Paul’s own telling he felt worse about being with Juanita than performing public fellatio on Charlie.

Another article titled ‘The Dichotomy of Evil’ has Juanita Wildebush telling her story where she was travelling around the environs of San Jose on her way to Mexico to meet her fiancé.  That’s so sweet.  And while traveling south picks up Susan Atkins, TJ Walleman and Tex Watson with Little Paul being left out all together.  That’s kinda sad.  I actually took Tex Watson from Ed Sander’s version which had four hitch hikers including Clem and Ella.  Once again, no Paul.  So there is a mix and count of people to match everyone’s taste and tale.  That’s kinda nice too, inaccurate as hell, but nice.

Anyway, Juanita says she arrives with three hitchers at night and everyone got all Munchkinlandish and started chanting ‘Let’s get Charlie, Let’s wake up Charlie!’ Then Charlie appears, nude as he apparently experienced some coitus interruptus with Gypsy.  Then all the Munchkins began to say ‘Look what we found, look what we found!’

Weeee represent; the Manson Famleeeeeee, we’d like to welcome you to Man-son land.

Then everyone began to hug and bond and have ever so much fun.

Then according to Juanita, Charlie asked her if he could spend the night with her in the van and she said –NO!  So it looks like Charlie was rejected and sent Little Paul to take one for the team.  But Juanita was just about to leave and go meet her fiancé then someone brought her breakfast and said Spahn’s was a nice place.  Thus causing Juanita to alter her plans, ever so slightly, where instead of continuing on to Mexico, she dropped acid and had group sex with Charlie.
I really can’t imagine what these people are deflecting or minimizing with their various re-telling of this story.  I’m not some floozy who just showed up and bedded Charlie the first night I arrived,
it was the next day, and with three other strangers, one of whom was a woman; OK?
Then again, I suppose it is this very eccentric logic which compels one to do any of this stuff in the first place.

Juanita goes on to explain that when she saw Charlie playing with some kittens, that she felt it was the right time to sign over all her money.  Then there was a real bad night where everyone was on bad acid and mescaline trips where she vaguely recalls Paul Watkins hitting her (Donkey Punch anyone?) and how Charlie was lamenting how all the love was gone as he was getting his shoes.  After reading that, I hardly needed to be told this occurred during a bad acid trip. Juanita does manage to align with Paul’s story by saying that her money was used to pay back taxes on the ranch.  If this is true, it makes Spahn’s desired to evict them in less than a year, a bit of a non sequitur.  Oh well, back to the Wildbush.

So Juanita continues to buttress her judgment skills by describing Tex Watson as the most gentle, kind, sweet, cherub she had ever known.  She said she was surprised that sweet, loving Tex was involved in the murders.  Ummm (insert long, incredulous pause), yeah Juanita, he was involved and was among the most vicious, unrepentant, merciless and savage of the group, so good call again there Diogenes.

Next Juanita is heading for the desert where she will spend the rest of her Family association at Barker Ranch.  She is ultimately left behind with Poston to watch the place.  Now, I’ve only ventured as far as Ballarat in my life and can say with 100% certainty, that is as far into a god forsaken, washboard road filled, slice of heaven that I will ever explore.  What exactly needed to be taken care of at Barker’s Ranch is beyond me.  But she claims to have stayed there which is anachronistic to her claim of having heard about Helter Skelter and the Beatles at the time because the album wasn’t released till a month after her arrival and there wasn’t any electricity to run a phonograph.  It was as primitive as can be.

Now Juanita is all alone with Brooks and presumably some blotter acid, since there wasn’t any ‘cable’ in Death Valley.  So they while away the days being one with nature (code for: Juanita balled Brooks like a Raggedy Andy till there was nothing left but a dried lifeless husk) when a couple of prospectors arrived.  A couple men searching for gold named Crockett and Berry.  Juanita seemed intrigued by Berry who liked to explore dark holes in the middle of the desert.
But it was Crockett who broke the spell that Charlie had over them and finally in June of 1969, Juanita Wildbush grabbed Berry, the prospector and beat feet out of Death Valley.

There you have it.  The terrible, strange and elastic saga of Juanita Wildebush and the hitch hiker(s) she gave a ride to Spahn’s where she signed over $10,000 to $16,000 worth of trust funds.  Oh well, I did some simple linear math about how this story should evolve by the year 2525, if woman can survive.  Assuming linear growth, the number of hitch hikers should be 57, with the trust fund swelling to $524,288,000.  Righteous bucks.

GREAT POST!! I'm still laughing (and thinking). There should be a tee-shirt, a consolation prize of sorts: "I went to Spahn Ranch, and all I got for $10,000. was this lousy tee-shirt." (And a lifelong, lingering case of the clap. Thanks, Sadie!).

A little birdie told me that Wildebush and Berry are not only still alive, but are still together.

There are some happy endings in this long, sordid and complicated tale after all.

Wow, it IS so nice to hear of a happy ending. "Juanita" was one of the lucky ones; also lucky to be at Barker and not at Spahn when things devolved into ugliness. I guess it's proof that our paths are an endless series of choices; and our choices along the way determine whether we fulfill our destiny, or whether fate intervenes - for better or for worse. I guess our materialistic natures think of the money and possessions lost (mine can, anyway) - but in the end, if she's alive and happy, that's what really matters. Awesome.

Oh, and I know I seemed off of the timeline in terms of the "devolved into ugliness" remark; but my take on it is that things started devolving among the group (criminal activity) by the end of '68, not summer '69.

A very good story, Farf. Thanks!

what a robust and tastey campfire story. Great stuff.
Ah, to know Matt's little birdy.
That Juanita and Berry are still together isn't just interesting, it's fucking stunning. I wonder if Nicholas Sparks would write about that love story.
What a coup that would be to get them to reminisce.

and that would be one of those great obscure questions in a Manson Trivia game....what was the name of Juanita's fiance in Mexico?

Has anybody got a picture of Wildbush or Berry?

Liz,
I was referring to a photo of Juanita but, the other picture might be interesting.

Liz,
I finally caught on, that I left the 'e' out of Wildebush. Don't let that stop you from putting up a picture of the other one, though. :)