One Degree of Sharon Tate

Watch your feet, because I'm about to drop some names ... BIG names: Jenilee (I'm no Suzanne Sommers) Harrison, Tracey (Growing Pains/Oprah) Gold, Todd (What choo talkin' bout, Willis) Bridges and Henry (The Fonz) Winkler. All of these and many more celebs were at the Hollywood Show at the Marriott in lovely Burbank, CA last weekend. The reason I went was to meet and greet with Barbara (Valley of the Dolls/Sharon Tate's Bridesmaid) Parkins. 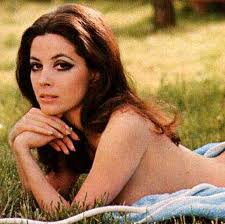 These events feature your favorite celebrity with a slew of their 8x10's and memorabilia for sale.  Autographs $20.00, pictures with the stars, another $20.00 or more depending on if the celebrity's star is shining. Barbara Parkins had numerous photo stills from "Valley" to sign, and the iconic image of her on the bed with co-stars Sharon and Patty Duke were the most popular. I caught my breath as I realized I was one degree of separation from Sharon Tate...which is all anyone can ever be because of the events of August 8th, 1969.

As a teenager, I read Patty Duke's autobiography, "Call Me Anna"... with a Judy Garland as Dorothy bookmark, if you must know... and I saw Sharon Tate's photo for the first time. "Wow!  She's so beautiful, I wonder what ever became of her?" I figured it out a few movie reference books and "Geraldo" episodes later. I became more obsessed with Sharon and the film AND book of "Valley Of the Dolls" while most friends in my social circle were buzzing about some singer named Madonna. The layers and coincidence that connect the book to the movies to the murders is phenomenal.  How else does one get star billing unless it's with scandal and tragedy?

While I have followed all of the books, movies and blogs on the murders, my opinion is that Sharon Tate's beauty and her unfulfilled potential was the fuel for the media fire that has been burning for forty three years. For the same reasons Marilyn Monroe's death is still selling books, Sharon's murder was like a perfect storm for the attention of the media.

Barbara Parkins was such a nice lady, who just happens to be a retired movie star. As we chitchatted and made the small talk that celebs make when meeting strangers, I wanted  to mention that just hours before meeting her, my partner and I had driven up Cielo Drive (after an amazing meal at Villa Blanca in Beverly Hills ... told you to look out for the name dropping.)

In the black of night, we drove up Benedict Canyon (pitch black) and turned onto Cielo (pitch blacker). I was in a nervous state, not wanting to be pulled over at 12:30 am, less than a week before the anniversary of the murders. My partner, Chris, the voice of reason, said it was a public street and we had every right to be on the road. We weren't the only ones out and about on a morbid curiosity tour ... we passed three cars coming the opposite way, and I imagined the guilty looks on the passengers in the other cars.

We stopped the car to walk the rest of the way to 10066 Cielo, and I couldn't get out of the car. I was frozen with fear, my heart beating in my ears, and the complete darkness closing in on us. "Really, they can't put more street lamps up here?" Chris got irritated with me and finally after two or three minutes, we turned around and headed back down Cielo to Benedict Canyon and back to the hotel. It was a visceral experience that was impossible to put into words.

Needless to say, I didn't mention this to Barbara, but the next person to talk to her immediately asked about Sharon. Barbara got very quiet and with a practiced voice said, "She was so beautiful." One of the odd connections was that across the aisle of the ballroom from Barbara was Nancy (I'm no longer using Pearl Cream) Kwan, and directly behind her was Taryn (I'm too pretty to be Susan Atkins) Manning. The only person I spoke with about Sharon was Jeanne (I Just Wrote a Book!) Cooper. I asked her about the Cielo Drive residence, and she told me about how Sharon and Roman bought it before she could.  I didn't have the heart to tell her the home was a rental, but it made me realize everybody wants to be a part of something, even if it's an historical tragic event. Plus, Ms. Cooper is 83 years old and if that's how she remembers it, fine by me. At least she didn't tell me she was invited to a party there on 8/8/69.

I've now met both Barbara Parkins and Patty Duke. Both seem to have the same mantra when it comes to Sharon Tate; "She was so beautiful" "She was so sweet." But one degree of separation will not get me Sharon's signature of my vintage "Valley of the Dolls" album. It's a shame, because we'll never know if she would have been one of the stars to head out to the Hollywood Show in Burbank to sign a few autographs and meet the fans. Chris and I spent about half an hour talking to Jenilee Harrison about the secrets of Costco pricing, another twenty talking to Charlene Tilton about why she hates Belinda Carlisle ... and it made me wonder what I would have said to Sharon Tate.

Tonight I'll be toasting Sharon's beauty and what might have been ... Cheers!

Barbara Parkins! Now, there was a beautiful woman.

I felt the exact same way when I was up at Cielo when the original house still stood and it was daylight.

Very cool story. But do tell: why does Charlene hate Belinda?

In her autobiography, Belinda tells a story of Charlene Tilton dissing her at the '82 Grammy Awards. As Charlene put it, "I wasn't the one coked up in the 80's" and then talked about going to see a solo Belinda concert with her daughter. They went backstage and Belinda kept her waiting for two hours. She said she wasn't mad for herself, but for her daughter...Charlene then launched into another story about almost being Wonder Girl on "Wonder Woman..." Tiny little Hollywood community!

I too would not consider myself complete unless I knew why Charlene hates Belinda. I can go to my grave now with no regrets...

But yet no one wants to know Costco secrets from Jenilee Harrison...

Every time I drive up to Cielo I feel like I'm going to get in trouble. Once a friend and I parked on Bella Drive across the canyon and were taking pics of the house and a guy came out in his truck from one of the houses and I smiled thinking I was busted, he stopped and told us he feels so lucky to have a beautiful view of LA from up there...he never asked what we were doing. I'm sure he knew, but he was nice.