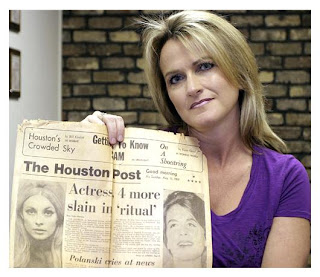 Sharon Tate, starting as a young girl would write letters to her Grandmother, "Nannie."

"The family archivist, Nannie kept all sorts of memorabilia including numerous letters from Sharon and clippings and magazines she later sent about her rising screen career."

"It was something Nannie wanted to "leave me." Sharon's second cousin Kelly Denson who was not even born when her famous cousin was murdered, inherited the box. Fascinated by her inheritance, she immediately began pouring over Tate's correspondence which started when she was a young girl and continued into her acting career."

Denson spoke about Sharon saying, "Not a day goes by that I do not think about her. Sometimes she's like my guardian angel. I even dream about her", said Denson.

As her own fate and life led Denson here and yonder, she carried her treasure trove of love with her, a large box of items that reflected a side of Sharon Tate, that while she was well-liked, few people would have suspected or imagined."

"Four years ago she brought the box with her from Fort Payne to Arab after she married Eric Denson now serving in Iraq. While she may have maintained a spiritual type of closeness to Tate, her physical closeness to the documents and items she inherited drifted. The box containing the Tate trove found it's way into a storage unit until after Denson moved. Eric cleaned out the unit and stored the Tate box in his grandmothers vacant house. When Denson realized where the Tate trove was she became alarmed."

"I said, "Baby you have to go get it. There could be rats out there." Deneson decided it was probably time to sell it.' So she could share it with everybody. "It's been 40 years now...

What do you think? Was Denson greedy or does she really want to "share it" as she claims.
I would thing "sharing" in this situation means putting them some where so others can view them for free. Share does not mean "selling." But that's just me. I know we are in a recession, maybe cousin needs a couple of bucks, but damn. 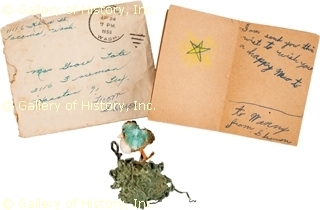 The above photo is a Christmas card from 1950 Sharon sent to her Nannie accompanied by a letter and a hand made trinket no doubt a Christmas present. For the small sum of $12,000.00 you can own them. Here is the link:

For shits and giggles while I was there I put Charlie's name in the search button. I also found several signed letters for auction over priced like Sharon's items.

You can own the drawing below titled "Pink Side" for only $5,500 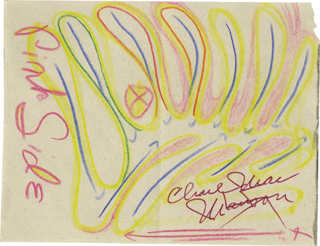 In much the same way that I enjoy fuc*ing with the Nigerian scam artists via e-mail; I feel like sending the "History for Sale" storefront an e-mail inquiring what the sales tax and s&h fees are on $45,998. Or are the prices perhaps all-inclusive? ... They're out of their freaking minds!!!!!!!! I don't fault the cousin for selling, whatever; but I found myself thinking people in the Tate family could make a mint selling eggs and sperm, because, jeez... awesome genes in that family! And it saddened me that the memory box of a sweet, hopeful, loving life ended with a yellowed, old headline screaming murder.

Pink side? Yeah, looks like a bunch o' twats...Charlie's a perv.

Trilby said...
In much the same way that I enjoy fuc*ing with the Nigerian scam artists via e-mail; I feel like sending the "History for Sale" storefront an e-mail inquiring what the sales tax and s&h fees are on $45,998. Or are the prices perhaps all-inclusive? ...

To fuc*ing funny! Trilby your hilarious.
I personally think the motive is greed.

Wow, you really read into it.
Your not right.

OMG you mean like not right in the head? Im so offended. ;}

To show how insane these prices are, a first edition of Oscar Wilde's Importance of Being Earnest, was found in a handbag in a charity shop and sold for 650 pounds. A scribble by Charlie and an actresses Xmas card...$12,000!!!!