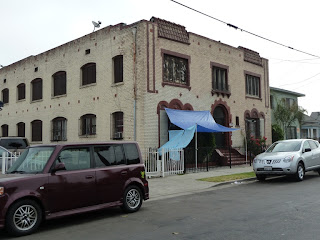 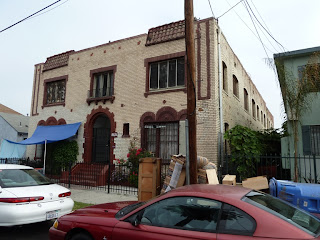 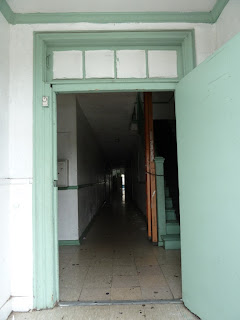 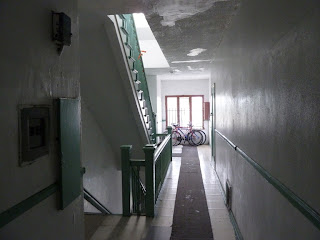 I can't help but think that makeshif awning would fill with water and collapse in a rain.

I have long assumed that Ms Chapman lived much, much closer to Cielo. What a way to start every day from an apartment building, to a couple bus rides, then a cab up Benedict Canyon. Hard to believe in an environment which must have legions of ‘help’ that there still isn’t some type of city sponsored shuttle service for people like Winifred.

According to Trulia, this apartment was built in 1925 and comprises 5,065 square feet with 20 units. Could that be possible? That’s less than 300 feet per unit. Even at 8 units that’s around 650 feet each and the place was built without a garage or single parking space.

If this is the lifestyle one can expect being a full time servant to the super wealthy, then I guess I’ll be crossing this off my ‘Bucket List’ today.

When I got there, the man said, "Oh, good. Some people have a hard time finding this street."
"I've been here," I said.
"They removed the street sign at the bottom of the hill."
I opened the car for the man, and asked if a lot of people come up here. He said they did. They come up and look at the gate, then they turn around.

It was pretty sweet, but really I just wanted to go back to sleep.
Also, maybe you guys have seen this before, but on Google maps, streets are labeled by the street name, but Cielo Drive is labeled "10050 Cielo Dr."

I can't remember numbers worth shucks. Is 10090 the new number given to the location of the Tate house?

Per Google maps that is around 14 miles each way. Probably 1 - 1 1/2 hours each way by bus service in LA traffic? Yikes!

You got mighty close.

@Farflung Chapman wouldn't take a cab up Benedict Canyon, she walked. It was over 2 miles each way. When Sharon lived on Summitridge, it was a steep 3 mile walk up hill to get there and 3 miles to get back to the bus stop.

I was in LA October 2013... I went up Cielo Drive but I didn't go up to the top of the Tate house gate... I figured people who live there wouldn't appreciate it very much...

Winifred Chapman was suppose to have lived in Watts...

Its a steep walk up the single lane dr to Cielo.

10090 Cielo Drive is the residence Winifred Chapman went to for help on August 9, 1969. They are the ones who called the police that morning.

She had a very LONG walk from the bus stop to 10050 Cielo Drive.
At least two miles and Cielo is a fairly steep climb.
However, I can't imagine how she felt seeing what she saw.
God bless her.

She had a hard job. Poor woman. Having to get two buses and a cab just to get to work!

Anybody know what happened to winifield Chapman?