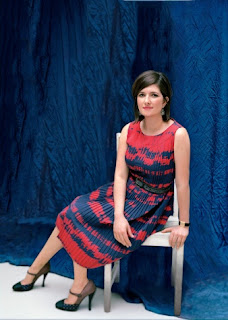 “I did have the impression that people drank far too much whiskey in Westerns, which was a problem for me, because I was drinking a lot of whiskey,” laughs Claire Vaye Watkins,discussing the difficulty of writing about the most mythologized of American landscapes. Filled with ghost towns and lost souls, her debut story collection, Battleborn (Riverhead), features the most captivating voice to come out of the West since Annie Proulx and Denis Johnson—though it’s to early Joan Didion that she bears comparison for her arid humor and cut-to-the-chase knowingness.

Set in towns across Nevada (the title refers to the state’s nickname), Watkins’s stories shift with the speed of cloud formations between past and present to follow young people navigating their own desires within a mirage of bright lights and billboards. An Italian hiker whose friend has gone missing waits for news at a local brothel (“I named the prostitutes after girls who were mean to me in high school,” deadpans Watkins); two small-town friends drive to the Vegas strip and end up outnumbered in a room at the MGM Grand, but, they assure themselves, “this is what they came for.”

Growing up in Pahrump, Nevada, where the sex trade is legal—Watkins drolly recalls her mother teaching her to parallel-park outside a local brothel, “the only place that had a curb in our town other than the Mormon church”—had a galvanizing effect on her feminism, and the author is at her most assured when writing about young women whose self-possession belies a more ambivalent sense of the realities of gender and power. The most provocative story is narrated by a young woman named Claire who, unmoored by her mother’s suicide, tries to make sense of the legacy of her late father’s involvement with Charles Manson. Recounting details gleaned from books and interviews, she’s pursued by Hollywood producers, fanatics, and a ghostly character she calls “Razor Blade Baby.”

Wide-eyed Watkins looks younger than her 28 years, but she’s an old enough soul to know that the best way to deal with mythologies is to confront them head on. Her father, who died of cancer when she was six, was once Charles Manson’s right-hand man; Watkins was a student at the University of Nevada when she read his memoir. “He was in charge of recruiting girls to the Family, and here I was, nineteen years old, crazy about women’s studies! I’d had a very flat, one-dimensional idea of him, but here’s a mistake, a transgression, something he felt conflicted about.” (Paul Watkins left the Family before the murders, and his testimony helped convict Manson.) At Ohio State’s MFA program—she’s now a professor at Bucknell University—Watkins began to write her way into this bewildering inheritance. After publishing a short essay about her father in Granta, she found a home in the more ambiguous truth of fiction. “All the stories about my father, they’re very mythic, but flimsy,” Watkins says. “ I just wanted to know who he was. And sometimes, the story is that you’re not going to know.”

This is an expanded version of an article that appears in the August issue of Vogue. To read the rest of the issue, pick up a copy at newsstands now.


Thank you, Grump for the tip

Very attractive girl. In this photo I really see her father in her.

Mighty pretty. What's with those big hands though? Probably the position of the camera.

Just remember, the book is fiction. The "razor blade baby" is Sadie's baby (Zezo) except it is a girl, and Paul is the father.

If you just want some good western stories, this is a good book for you.

After you are fiished, you will wonder, "Why the hell would anyone live in Pahrump"?

LOL. She does have some mitts on her, doesn't she? I'll never be able to look at this pic again without checking out her hands. Thanks a lot!

I am a HUGE dissenter here as reading Battleborn was probably the most unenjoyable reading experience I have had in ages. The stories were one-note, bleak, and simply "much ado about nothing". The characters were sketchy and the writing style so disjointed Claire must have been on ten Red Bulls when writing.
Sorry, I am suspect Claire is a very nice person and she obviously she has talent but her writing is just not my cup of tea.

Someone, somewhere, is teaching that in contemporary writing the only valid punctuation to "creative stories" is angst and forlorn despair.
It simply bores me to death.
And the only TLB related story - Ghosts, Cowboys - has no meat to it whatsoever. It is a soggy lettuce (from the dumpster) sandwich. If Claire chooses to adopt an attitude of callous or whimsical indifference to her father's notoriety that obviously is her prerogative. The story just left me feeling cheated.

Someone, somewhere, is teaching that in contemporary writing the only valid punctuation to "creative stories" is angst and forlorn despair.
It simply bores me to death.
And the only TLB related story - Ghosts, Cowboys - has no meat to it whatsoever. It is a soggy lettuce (from the dumpster) sandwich. If Claire chooses to adopt an attitude of callous or whimsical indifference to her father's notoriety that obviously is her prerogative. The story just left me feeling cheated.

Loved Battleborn. Found it very evocative of the landscape and the people found there. Her background is obviously very unusual and interesting and had a profound influence on her, but I'm pleased for her that a lot of the articles and reviews I've seen haven't placed too much focus on Paul and the Manson connection. That stuff is an obvious point of interest and inspiration, but I think she's talented enough in her own right that there won't always be the impulse to reference it so centrally. As Grump pointed out, she is writing fiction after all.

The Col said he really liked Battleborn too so my guess is that I am in a decided minority here in not liking the book.
Fans of Prof Watkins will call her writing style stark and evocative. I just see it from the other side -bleak and sketchy.
As always, art is subjective.

It is no surprise that Prof Watkins has a rather muted and dismissive attitude towards her father's notoriety..."He was no killer. Nor was he a hero. This is not that kind of story", she wrote (paraphrased).
She was six when he died and it is highly doubtful they ever 'discussed' TLB.
Still, Paul was a major player in one of the most talked about events in American history for the last half of the 20th century so Ms. Watkin's "whimsy" towards TLB and her dad just feels indulgent and short-sighted to me - at least from a writing perspective.

GrumpFromPahrump said...
After you are fiished, you will wonder, "Why the hell would anyone live in Pahrump"?

Didn't someone say the sex trade is legal?

A woman with big hands can catch the ball. And line it up for the three point shot.....

Is there some other mission we are here on earth for?

Didn't someone say the sex trade is legal?

Yes, but "normal" people could not afford those girls. Most of the customers come in via limo from Vegas.

Us locals just go to them for the food.

Grump,
Scratch the girls as a reason to live there. Do they have a restaurant in the brothel?

orwhut said...
Grump,
Scratch the girls as a reason to live there. Do they have a restaurant in the brothel?

You bet! Restaurant and bar. The Eviliz tour all ate there the first night. Food is great and very cheap. The girls are walking around and try to hit on you.

Sunday afternoon are funny there. Lots of folks go there to eat after church!

Thanks for the link, Grump. The girls are lovely. After church,... who would have thought it?

Doc, thank you for being diplomatic, and please remember, making people laugh, is part of my shtick.

No problem hexjoe. I like to make people laugh too.