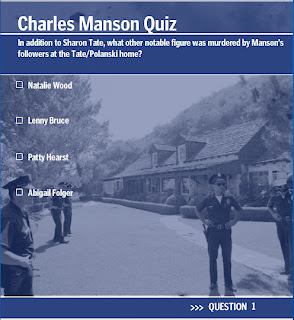 I missed one. Shame on me.

Don't feel bad. The questions were poorly worded. Whoever wrote them was no expert in the subject matter.

Bobby was the first "suspect"? Was he suspected of breaking out of jail, killing Leno and Rosemary, and then breaking back in?

Yeh, I'm happy to say I got that one wrong too.

I also thought the x carving one was a trick question since it said "one of Manson's female followers". Obviously many of them did it, some male.

Same with the conspiracy question, since Manson was present at Waverly.

They really should consult us on this shit.

Question 3 is misleading since the true answer is: “NONE of the above”

Healther Skelter indeed. Guess spell-checker doesn’t have that in the lexicon yet.

In the explanation that followed, it should have been written as:

Healter Skelter (sic) was scrawled on the refrigerator door, in likely reference to the Beatles song “Helter Skelter” which was said to be a coded message to Charles Manson. ‘Helter Skelter’ would later become a bestselling book title, co-authored by a member of the prosecution. It was incorrectly spelled at the LaBianca murder scene, and ironically on this quiz, thus making a score of 10/10 – impossible. Everything that’s right is wrong, this quiz is just reflecting back on you and a bunch of people freak out man, it’s just another example of how innocent people are put in jail and how the trees need to be protected.

There now, I think I’ve beat the crap out of this bit of trivia enough. The planet is back in balance, thanks to me.

Does anyone ever wonder how Manson & Co. will be remembered through history? With former and present D.A.s playing loose with the facts I believe it gives license to the media to do the same. I believe eventually Manson will emerge as a folk hero and the facts will probably be meaningless anyway.

and the greatest irony of all is that in 20 years 90% of Americans wont know who Charles Watson is- but will know Charlie Manson for reasons they should know Tex.

Kinda like the Ted Williams/Joe DiMaggio debate, hey Saint.
I don't know, who'd you rather be stuck on an island with, Charlie or Tex? Charlie is vastly more entertaining. Tex really is a bore. He was/is nothing but a Clockwork Orange mutant.
You're right of course, Charlie will be remembered long after Tex is toast. Manson really did play the role of crazed pshycopath perfectly. Which. of course. was his intent all along witnessed by his bragging of "being the most famous person in the world."
If that were true, stop and contemplate the poetic irony of the most famous person in the world sitting in his cell all alone 23 hours a day. It's a Kafka thing.

I dont have a single friend in my every day life who cares about this case. When I bring this up, or when the topic arises once in a blue moon- almost none of them can name the girls, and the recognize Tex Watson when I point out he actually did the killing- but none of them realize that.

They all know the name Manson..

lol Say what you want about Bugs- he did his job, and created his myth...

Im sorry- I meant that some of them can recognize the Name Tex Watson- but none of them really understand his role...

I suspect that whoever made the quiz only read a quick synopsis somewhere but, I enjoyed the quiz anyway.

I swore at the screen after the two I got "incorrect".

yeah, it is almost like Manson is a brand name, Saint. It will stand the test of time for sure, just as Hitler, Oswald, Bundy, Dahmer etc will resonate for a good long while.
Funny, it seems to me that the Bug hates the fact that he made Charlie into such an iconic figure. Almost like he won the battle but lost the war - given Manson's fame.
I'm just so happy Watson has almost no following for he truly is both dispicable and a bore.

I got the Bobby question wrong as well- he was the first suspect?

Technically wouldn't William Garretson be considered the first suspect, since he was arrested first?

Stacey- the question was asking about the first suspect in Labianca
:)

@leary7 I don't think he hates it at all. Every single time his phone rings, he probably hears the sound of a cash register.

St. C-
Crap. I guess I should learn to read the question more carefully? And to think I'm studying to get my teaching credential.

That quiz pissed me off. I didn't realize only ONE girl carved an x on her forehead. I failed!

Has everyone forgotten that it was actually Leno's business partner who was the first suspect?