Then It All Came Down - Truman Capote 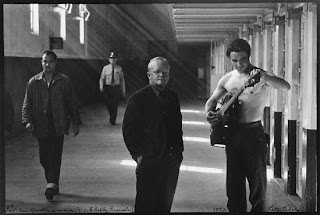 Scene: A cell in a maximum-security cell block at San Quen­tin prison in California. The cell is furnished with a single cot, and its permanent occupant, Robert Beausoleil, and his visitor are required to sit on it in rather cramped positions. The cell is neat, uncluttered; a well-waxed guitar stands in one corner. But it is late on a winter afternoon, and in the air lingers a chill, even a hint of mist, as though fog from San Francisco Bay had infiltrated the prison itself.

Despite the chill, Beausoleil is shirtless, wearing only a pair of prison-issue denim trousers, and it is clear that he is satisfied with his appearance, his body particularly, which is lithe, feline, in well-toned shape considering that he has been incarcerated more than a decade. His chest and arms are a panorama of tattooed emblems: feisty dragons, coiled chrysanthemums, uncoiled serpents. He is thought by some to be exceptionally good-looking; he is, but in a rather hustlerish camp-macho style. Not surprisingly, he worked as an actor as a child and appeared in several Hollywood films; later, as a very young man, he was for a while the protege of Kenneth Anger, the experimental film-maker (Scorpio Rising) and au­thor (Hollywood Babylon); indeed, Anger cast him in the title role of Lucifer Rising, an unfinished film.

Robert Beausoleil, who is now thirty-one...

However- on his site- he also says that this interview in bunk. he says words were put in his mouth, and he was told it would not involve questions about the family- and once it became apparent that is all it would be- he terminated the interview. He points out a few discrepancies about the interview as well to back himself up- its been awhile- I think where it actual took place was one...

a little of both?

Bobby sounds like all of the Family members at the time. I doubt it was embellished.

Yeah o.k.- I dont know- it does sound a-lot like the cocky arrogant guy he was then...

My goodness has that changed

If I were him I'd want to distance myself from what he said to Capote.

But instead of saying 'hey, I've changed since then', he denied saying those things.

He's had a really long time to think about it. He sounds reasonable and articulate. His is one book I really look forward to.

He sounds very reasonable today, and I understand why he doesn't want to come across the same way. LuLu has always been the favorite if any were to get parole- and I am on record that none of them ever get parole. However- it is my personal opinion- he makes the best candidate.

or the thoughful soft spoken sensitive musician with glasses he has apparently become?

also wonder if without jail this type of transformation would have taken place??

after reading this again I cant help but think of being a young kid up in jersey. When I was grounded over the summer ( always) I would sit in my room and listen to the sounds of all the other kids playing outside. The hurt in my heart for missing whatever the hell was going on out there was too much to believe at the time. That is what I think about when I read his description of jail life in the first part of this...

then later he says the following :

The media, they called us a “family.” And it was the only true thing they said. We were a family. We were mother, father, brother, sister, daughter, son. If a member of our family was in jeopardy, we didn’t abandon that person. And so for the love of a brother, a brother who was in jail on a murder rap, all those killings came down...

he really said this and it was not embellished- then he hasn't changed, or at least is still not telling the truth because also on his own site is another interview with???? second mag?? someone...

and in the very first line ( this was much later and much closer to the guy he says he is now) he says:

" first of all lets get something straight. I am not now nor have I ever been a member of any family. that was a name the media came up with"

so if he is just trying to distance himself I get it. But he has changed his story as much as anyone involved....

Does Bobby have a book coming out soon? What are the details on that?

The interview title says 1973, but the words within indicate much later. I'll assume it was around 1980, and he was still surly.

Very good interview. I wonder if Bobby is still associated with the Aryan Brotherhood? If so, I doubt that would help his chances at parole...

I suspect his views have changed a lot since that time, however. We were all angry young men once, or rather I was, and Bobby was.

Rod Foglio, what do you base your conclusions on?

Amanda
You can try his website for details- He has a section there where he prints and answers letters- and he had been talking about the book for awhile. the last time I was there- which was awhile ago- he actually had printed a sneak peak of an early chapter. Not sure when it will be finished-

He should of asked BB if Leslie & Gypsy had good gash....