Debra Tate says she heard attorney Boyd say that Tex confessed to many other murders! 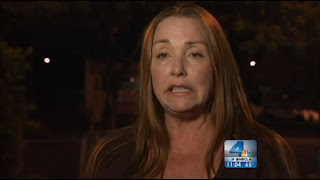 Sharon Tate’s sister, Debra, is joining the Los Angeles Police Department in urging a Texas judge to release hours of unheard audio tape recordings between Manson follower and convicted murderer Charles "Tex" Watson. The LAPD announced on Thursday it has a dozen open investigations into unsolved murders that occurred near known Manson Family hangouts, and believe the tapes may help them solve the cases.

I wonder why none of the girls turned against Tex for a lesser sentence. I guess at the time of conviction they were still loyal followers, but after all these years, why haven't they talked?

I cannot quite grasp why the tapes would be held up in court after all this time. It is becoming more and more clear that these creatures will be staying in prison till they check out. Let us give some closure to families and close the book on some cases.

Bruce Davis is quietly excusing himself from afternoon chapel, strolling to his cell with his Bible in hand, smiling & waving at fellow convicts, arriving in his cell, throwing himself on his bunk, burying his face in a pillow, and screaming "FUUUUUUUUUUUCCCCCKKKKKK"into it as loud as possible....

I personally feel Tex is responsible for more than he has confessed to (he has never confessed to the Shea murder but he was there stabbing)but I also feel that he'd never confess to his attorney. He's stated before that there are no more murders. I also don't feel he had anything to do with Marina Habe or Walts, but maybe the Olancha murder as well as the belief that he and Bruce may have done something together.

This is intriguing, if Debra has her facts straight. Has she ever been known to be confused on things like this?

Also, if they were trying to make these murders stand out to spark "helter-skelter" why did they keep them down-low and secret?

Debra is not a great source of correct information, but the news in LA just said they think there might be links to other unsolved cases. Sounds like the LAPD is ready to start releasing some info. I'm keeping tuned it.

A lot of things about this bother me. I'll only mention the most egregious:

First of all, she calls Boyd Boil - is she on drugs? It's not even a candid interview. Why not shoot it again? Or did they just think she'd fuck it up worse? She's searching for each and every word as she says, "It's very, very, probably (wtf does that mean) just the tip of the ice berg? Mr. Boil, Tex Watson's attorney said that Tex Watson, in his confession tapes, admitted to many other murders by him and his crime partners." HUH?

Then they go on to say that DT heard Watson's attorney on another tape - presumably admit that Watson killed others. So, where did that tape come from and how did she hear it? And, why hasn't LAPD or the DA commented on this supposed confession by Watson's attorney? I mean, isn't the real headline then, LA DISTRICT ATTORNEY'S OFFICE DISCOVERS TAPE! MANSON FAMILY MEMBER LAWYER CONFESSES THAT HE KNEW OF MANY MORE MURDERS COMMITTED BY THE MANSON FAMILY!!!

And what ethical, good, smart attorney lets someone get him on tape admitting that his client confessed to other murders? Are we really to believe he was that dumb?

So, if by chance this highly unlikely story is true, why didn't the interviewer follow up with something like like "LAPD (The DA's Office) has confirmed this to be true", or "wouldn't comment". Nothing.

I think (I could be wrong) only NBC ran this - couldn't find her quotes anywhere else in the news stories on the subject. I think NBC will end up with egg on their face.

Because we ALL believe Debra.

i believe it is quite possible manson and the family murdered other people, especially in the desert. lets look at the converse, why would they not commit more murders--they just committed nine murders, so what would stop them from killing people in the desert that annoyed them, didn't fit in, people that they were afraid knew the truth and were going to talk, etc. they were extremely isolated in the desert, no witnesses, no reason not to just kill these people.

When you watch the video, notice the giant cockroach crawling on the newscaster.

beauders, I think I see the vicodin shuffle there in that parking lot.

I don't think Tex admits to any other murders on his part (maybe Shea) in these tapes. I don't think these tapes were originally made with a book in mind. If he did make other admissions I don't think he would have agreed to releasing them to his co-author, whose approval he was seeking. However to make himself look less culpable he may have inadvertly implicated others, maybe just to explain how he wasn't the only who had lost his mind.