The 'Witches of Mendocino' saga begins...

Welcome to an Eviliz chapter on the Ukiah Murders and the Manson Connection.

In May of 1968 a chain of events began that rocked Mendocino County, CA. Though unsolved to this day, the triple murder of Nancy Warren and Clyda Dulaney (and her unborn female baby) in October match the gruesome pattern of the Manson Family. The "Witches of Mendocino" arrests took place as documented in this Article dated June 24, 1968 placing key members of the Family close by. Could they have been involved? The next week or two will shed light. Please join us. 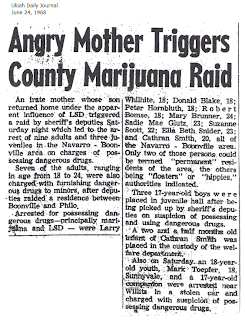 As you may remember, Manson sent a group of Family members up to Mendocino County to scout for a new permanent residence. This happened around May of 1968. Sadie, Mary and the gang were zealously trying to gain young recruits. They were dirty - they stunk and the bus stunk - and they were high profile with their drug use, even though they had infants in tow. The locals branded them the "Witches of Mendocino."

On June 21, 1968 they apparently dosed 17 year-old Allen Rosenthal. His mother called law enforcement. When they responded Allen was babbling about his legs being like snakes. Mom pointed the finger at the "Witches" and the raid mentioned in the above article was on...

Here's something we didn't know:

Boonville and the Anderson Valley has its own language called Boontling. Here's the wiki on it as well as a video. They're not a definitive on the language but they give us a good idea of how it works. The Wiki article has references if any of you care to learn more. We wonder if the Witches may have picked up on Boontling and used a variation they created themselves. ZuZu's for candy comes to mind. The Family was well known to cackle in a language that only those in the know would have any idea what they were talking about. Is this where it began?

The problem I've always had with the theory concerning the Families involvement in these murders none of them where known to be killers before Gary Hinman correct?

I could listen to that guy talk all day. He reminds me of my Grandma Maw Maw. It's a different dialect from Appalachians but the way they came up with the words is just the same.

The word zu zus is prison slang for candy. Wham whams are any other thing bought from the prison commissary. Sometimes when a prisoner is getting assigned to a new cell he's told grab his zu zus and wham whams and get to his new cell. My ne'er do well brother in law told me this years ago.

Boy oh boy! I bet that bus did reak of fart, feet, bad breath, scalp, and Sadie's butt! The boys that they "dosed" probably got a whiff of the bus, and that is what they were hallucinating on. It wasn't LSD it was BO!

Patty has been trying to locate the Witches' house in Booneville for some time with little to no luck. She did learn that the house they lived in was a ramshackle old place called the "Alice Ostrum Price" house. No idea who Price was though I've dug through racks and racks historical documents. Patty did discover that Booneville was named for W.W. Boone, but was called "Kendall's City" prior to 1857. They make some kick ass beer there called "Boont." Ever had it? It's one of Mr. Patty's favorites. Patty plans on getting him to drive her up there sometime and do some poking around. Who knows? She may find the witches' den some day, after all. :)

Hey Patty, do you know about this?

"They moved in to Alice’s place on Gschwend Road, south of Floodgate but not long afterwards they moved to the Price Ranch and rented out Alice’s to a few young women – they turned out to be the early members of Charles Manson’s gang, who also lived there for a time."

Do those street names sound familiar?

Lots of history from the old timers here: