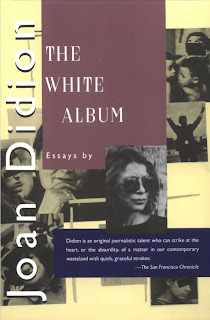 The White Album is an autobiographical literary essay detailing loosely related events in the author's life in the 1960s, primarily in Los Angeles. In the course of describing her ongoing psychological difficulties, Didion discusses Black Panther Party meetings, drug-related experiences, a Doors recording session, various other interactions with LA musicians and cultural figures.

Didion also discisses several prison meetings with Linda Kasabian, who at the time was testifying against Manson, Krenwinkel, Atkins and Van Houten for the TLB murders. Apparently, Sharon had been an acquaintance of Didion's. The murder trial cast a cloud of fear over Hollywood that seemed to propel many of Didion's insights. The impression conveyed is one of a city and nation pervaded by paranoia and detachment.


The book is available at Amazon.com


Thanks to Suze for the tip.

I read this book a couple of years ago. I was hoping for more info about Linda because she is one Family member I would LOVE to have a conversation with. The Linda part was pretty short but the book is good anyway and a great read. The author is a super interesting woman, her husband was a writer as was her brother in law, Dominick Dunne, the crime writer/ TV personality. Dominick Dunne wrote some great true crime books disguised as novels about the OJ Simpson murders, etc.

Joan lives in NYC now. Perhaps she could get together with Candy Bergen and Angela Lansbury and be inspired to write some more.

Her connection with Kasabian was that she was to write a book about her or collaborate with her, but it fell through.

I just ordered my copy. But please, go ahead & spoil it for me. How was it that she was inside the jail to meet LK? Was she in there as a writer/reporter or was she in the hoosegow on monkey business?

I like her writing... Apparently, at one time she planned on writing an entire book about Linda, but Linda flaked out. (Surprise, surprise). I know that story written by the guy Linda supposedly gave a ride to as she was fleeing the ranch has been questioned as to validity, but he went to either Harvard or Yale, and I recall a comment by Didion to the effect of Linda being to busy going to a Harvard-Yale football game to meet with her... James something-or-other?
On the subject of Linda, anyone here ever read the book allegedly by a daughter she had and left, before she had her second set of kids? Kanarek supposedly attempted to question her about the daughter and son she abandoned, to show she wouldn't have been that concerned with Tanya's welfare at the ranch...

I ordered the book ($35. back then). While terribly written, I found the information on Linda's mate before Kasabian interesting. He was "a major L.A. drug dealer", according to the daughter, who later moved out into a more remote area. Made me think of Linda having "been to the True house in '68", the whole Robert Kasabian » Charles Melton » Watkins/Manson/Topanga » Topanga Cyn Lane/Staircase associations, etc. For some reason, I found myself wondering, back then and now, whether Kasabian's first OR second exes had any affiliations with the BEL. Hmmm. Anyway you look at it, it's another way to open discussion on Bugliosi's possible concealment of facts relevant to Kasabian's character, at the very least. At most, it's alot more. Research has firmly convinced me only one person had the power to arrange manipulation or concealment of motives in this case - the ultimate "fixer", Sidney Korshak.

Aaarrrggghhh... should have been "too busy" in earlier post!! Damn smartphone!!!

Aaand... in the updated blurb here she speaks of being found by her half-sister in 2007!!
http://bookstore.trafford.com/Products/SKU-000153487/In-My-Mothers-Closet.aspx

I met Joan Didion a few months ago at a reading/talk. She's an amazing person...everyone should read everyone of her books!

I just ordered this as well. You guys sold me :)

Joan Didion is one of our best and most procovative writers. It is a damn shame for us she never did the book on Linda. It would probably have been akin to DeLillo's 'Libra' about Oswald.

Wow, thanks Trilby! I will be ordering that book today! Sounds juicy.

The book is heartfelt, but needed structure, details and editing. Also might be it was catharsis enough for her to just write it and release the memories... I've been msging with Gina for the last 15- minutes or so. She's a very, very nice and sincere person. No doubt she's Linda's daughter - strong resemblance. I'm going to ask her if she'd like to rewrite her book, with an editor. I can connect her with a better publisher. Or just an editor. Reading her book is just going to leave you hungry for details (& probably pissed off at me about the money you spent...). But once again, I'm left reflecting about all the people, on both sides of the cast of characters, whose lives have been affected by all of this. We speak of them in the abstract, but every one of these names has loved ones behind them. Sounds simplistic and stupid, but when I get caught up in the abstract picture of trying to get at the truth of all this; I lose sight sometimes of all the others potentially affected. It's good to be reminded so I can remember to approach everyone from a place of respect. (Even people I feel NO respect towards, like Pittman :(, "Gypsy", etc.

that is an astute observation, Trilby. I have mentioned before on this blog that at one time I was engaged to Oswald's daughter so I got to know Marina and several others in that saga. It does put a whole new light on a subject to take it out of the abstract that the limelight colors it in and make it personal and intimate. That is what Dunne and DeLillo and Mailer and other great writers have done to epic events in our time. I don't think anyone, even themselves, would classify Bugulosi or Ed Sanders as great writers. I would have liked to have seen Gore Vidal turn his eyes on the TLB saga.

Leary, I've greatly enjoyed your posts during my "lurking" days! And I like your icon :).
I'm an admirer of Ed Sanders. I think filtered through the passage of years, changing styles, & advent of technologies; that people criticize his work. But I think his accomplishment was TREMENDOUS - at a time when there was no info out there except media and rumors, he uncovered a great deal. I can't even imagine how crazy and overwhelming and creepy it must have been to try to make sense of it all. Without him, we'd only have had Bugliosi's bullsh*t. I like his most recent edition of "The Family", he included every rumor, etc. and I think it was done in the manner of dropping bread crumbs and leaving a trail for future reasearchers. I think he's a good, ethical guy who maybe got spooked off the subject - just my opinion.

yeah, Trilby, I can definately see being an admirer of Sanders. I read The Family decades ago so I should do the update thing. Has Sanders commented on how his "Manson connection" has affected his life? He does seem like a cool guy given his diversity of interests and talents.
Wouldn't he be the perfect choice for the spring Manson tour guide!
I am so glad you are no longer a lurker and dazzling us with your insights and comments. Really, thanks.

by the way, not to sound like a suck up, but I thought your comment on Didion's book was so dead on it made me stop in my tracks..."heartfelt, but needed structure..". Perfect.
And I loved that story on Linda by the Harvard student. It is over on Cat's site or one of the other ones, I forget. But I thought it was a fun read - no parting of the clouds but just a quirky character study.

Awww, shucks, thanks, Leary... I wish I could take credit for the comment you praised, but in my post I forgot to clarify that I was talking about Linda's daughter's book. I've been impressed by literary analysis' you've posted in the past. I've been looking for Didion's book today, I thought I had it but it must've been one of the pre-Katrina books... I was remembering a story Didion told about Manson and some of the kids walking into their beach house in Malibu or Santa Monica, but I can't remember if it was in The White Album or somewhere else. I'll go to B&N tomorrow and read it again for free, I guess.

That's kinda funny, Trilby, that a your comment on Linda's daughter's book would be exactly how I felt about Didion's book. I remember reading it years ago and feeling that while provocative and sincere, it was also rambling and unfocused, like she was trying to ape Hunter Thompson.
Anyways, is the Linda daughter you are referring to the same as the one called Lady Dangerous?
Pre-Katrina books??? Sounds like a story.