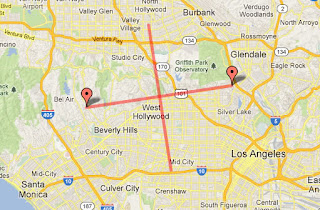 Have you ever seen a map like this of a "kill zone"? Today it's one of the "first" things an FBI profiler would create.

On one side is Cielo, on the other is Waverly. Connect the outer 4 points of the cross and you will have the "kill zone" or claimed turf. There right in the middle is the Laural Canyon "actors / musicians colony".

The "Actors" panicked out when TLB happened. Drugs were already heavy in the colony, so when the musicians moved in it only increased. 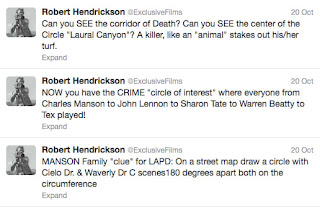 I have learned in a very humbling manner how little I know about this case in the last year or so, BUT I have always believed that If Charlie or Tex knew the victims- it was through Laurel Canyon.It always amazes me that some people will not accept something unless there is photo or eyewitness proof. That is never going to happen here. WE know Dennis Wilson was around them- he refused to talk about it until the day he died. Why would anyone who doesn't have to admit it do so? Who would want to be associated with these people? But that doesn't mean they didn't associate...

Bad Example :) I used to point out that Charlie had to have come into the vicinity of Neil Young due to Cappy.I have two books which mention that when she met Charlie- she was a Buffalo Springfield groupie. I reasoned that for her to leave one circle of people for another- the two circles must have come into contact with each other at some point... But only when they find Neil Youngs own words confirming - will they believe Charlie met him.

That example may suck but think about it a little bit more and try and digest my idea...

How many times do the same names have to intersect before we can conceded a possible connection?

Think about the following:

When Neil young left Buffalo Springfield he was briefly replaced by David Crosby- who was recently kicked out of the Byrds. The Byrds were managed by Terry Melcher. After Buffalo Springfield David Crosby joined Steven Stills and Grahm Nash in CSN ( later to be joined by Neil young) This band came together at Cass Elliot house. We know all of these poeple were friendly and personally /professionally involved with each other. They all lived in and around the Canyon. We also know that Gibby and Voytek were friendly with Cass, and lived right down the street. They socialized as well.

We dont have pics of Charlie and/or Tex with any of them.

BUT- we know that Charlie and/or Tex was friendly with Dennis and Jackobson. We have all read that Charlie used to get showered at Dennis' house and borrow clothes and go out with him and Jacksobson to party with the " beautiful people"

Who do you think they were taking him to partying with? who were Wilson /Jackobson/Melchers friends?? what are the odds that Neil young met Charlie and Dennis wilson/melcher/jacksobson all did- but none of the other people in there every day lives had?? But some believe this is the case because there is no pictures of them sitting around this fire playing guitar. We have to use some common sense.

I dont know about the Labiancas, and I still am not sure why Cielo happened either. But if it were a robbery or drug burn- I believe that the location was chosen based on some information one of them gleaned as a result of relationships or acquaintances forged in Laurel Canyon...

I haven't gone on a good rant in awhile so please give me a pass here, and I promise to go back to posting and leaving this to all of you... :)

But in the last couple of years I have read a few ore books. Some of them are too far out like " The Ultimate Evil" some are very vague in details like the books on the Brotherhood of Eternal Sunshine. Others are about the music industry and have no interest in the Manson case.

but in all cases the same names keep coming up. The same phrases and catchwords. Who got what from who???

I honestly believe that if they had 1/3 of the technology we have today ( digital cameras, smart phones, internet) back then- we would be shocked at who was hanging around with who...

I keep thinking back to Bobby and and Jay both being in the same movie ( Mondo Hollywood) While that alone might mean diddly squat, and is probably nothing more than coincidence- it is just another example of how these people all seem to wind up in a certain proximity to each other...

It's like playing Six Degrees of Kevin Bacon, but with the Family. I think they all partied together, and if they didn't know Charlie or Tex by name, they knew them by sight.

Laurel Canyon is not at the center, but it's close enough. The shooting of Crowe also takes place near that center. But what about Hinman? We know the killers went as far as Pasadena and Venice to kill so those points should be included too.