All this talk of another Eviliz Tour has got Patty's mojo ticklin at her to finish her reflections on tour version 1.0.

In Little Paul's book (which you can read over at The Colonel's pad), he describes some of the landscape on the way up Goler Wash as looking like mounds of "melting ice cream": 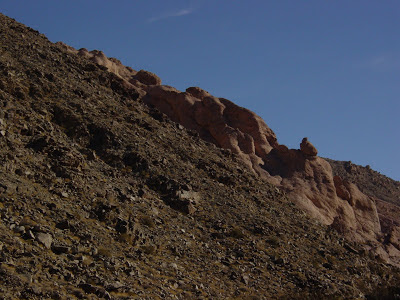 Patty thinks he must have meant this spot. To her, they also look like reclining, nude bodies that Charlie himself might have choreographed. Geologically speaking, this spot is one where four different systems collide in the same place! It's otherworldly, and a good example of how the desert can trip you out just by virtue of being in it. On acid? I don't know for sure, but all Patty can imagine is, "holy crap!"

Speaking of "holy crap!" That is what Patty had said out loud when she saw The Grump from Pahrump's book collection. Check it out: 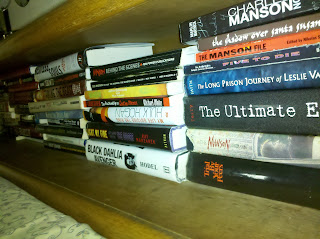 He had this cool poster too: 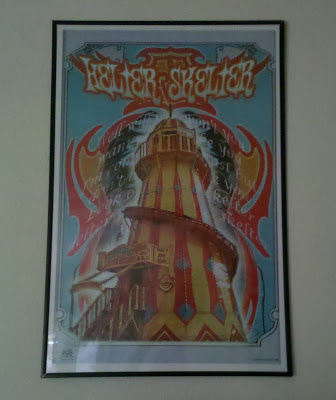 And he was an amazing host. But, Patty digresses: back to the desert. Death Valley is usually beyond dry. But when it gets wet, the water shoots right over and through it, and VIOLENTLY. In some parts of Goler Wash, you can really graphically see the scale of how and where this happens: 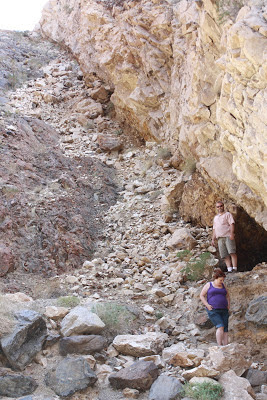 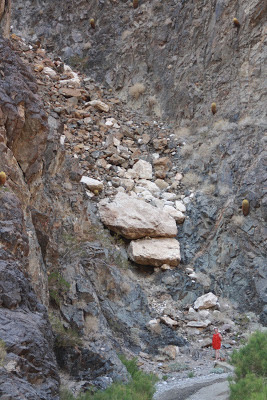 So, if Sergeant Dostie says that there's eight feel of dirt over some bodies at the top of the wash, and another 40 feet over some more bodies at the bottom of it, then as a matter of fact YES, Patty DOES believe him.

And speaing of bodies, here's a shot midway up the foot path beween Barker's and Myers' ranches. This is a spot where yet another body is supposed to be: a girl who "got homesick" is said to have been slain here. The image gives a good perspective on how close the two ranches really are: next door neighbors of a sort. 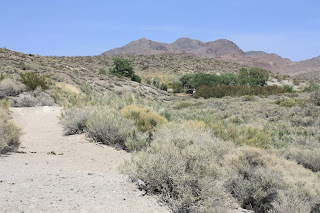 The next closest neighbor is Newman's, which is about a mile down the wash from Barker's. Newman's Cabin is what the Family called the "Halfway House." Patty was more than a little surprised to see his business card still there, because it's amazing that no one has swiped it yet. Don't get any ideas, either. And if you call the number on the card, you have to tell Patty about who answered and what they said, okay? Come on now, pinkie promise. 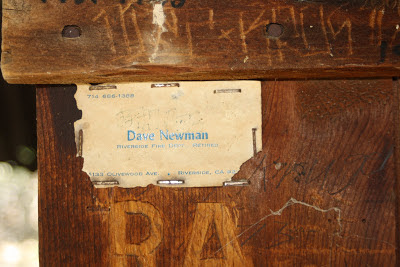 Looking below the nude statues, it appears that an important part fell off. Poor statue.

Summer has been trying to get me out to the Barker Ranch. I don't know if I want to go. It reminds me too much of where I grew up. Seriously I grew up way out like that with nothing for miles.

But if you guys go out there by way of LA you can pick me up, I'm not driving out there alone.

One question: What's the book right about "Trial by your peers"?

And interesting that Dave Newman's business card has a Riverside address, but an Orange County phone number. Maybe they Riverside didn't have it's own area code then.

Right above. Damn, typing too quickly.

Patty will eventually write about Trial By Your Peers. Unless, Grump, you beat me to it....;)

Those boulders were moved down that wash by one thing. Water. It rarely rains out there but when it does, earth moves.

Sgt. Dostie will get his dig one day.

Stacey, it's "The Manson Women: A “Family” Portrait" By Clara Livsey, M.D.

No problem Grump. I was typing so quickly even I didn't understand what I was saying.

Why does no one welcome me back? It is my blog after all. :(

Some of the pics posted I don't recall seeing before, even though I am in one of them. It must of been all the legal marijuana I was soking that made me forget. Thanks for sharing Patty and welcome back Jack.